In a longer school day, students complain of hunger and drop out

“As you can see, the green plum, everything is finished,” says Sinneh Binda, pointing to a tall mango tree. Towering over the courtyard of the Cinta Public School, about an hour’s drive from Liberia’s capital city of Monrovia, the tree is barren, devoid of the fruit that should be hanging from its branches. “When we get hungry, we can just be eating everything in the tree,” she explains.

Binda is a student at the Cinta Public School, which was taken over by US-based Bridge International Academies this year as a part of a controversial public-private partnership with the Liberian government. Under the pilot phase of the partnership, a mix of for-profit and charity education providers have assumed control of 93 Liberian public schools, including 25 managed by Bridge.

Often described as an “experiment,” a key selling point for the privatization program was the extension of the school day from 12:30pm to 3:30pm. But parents in Cinta say they were misled by Bridge and the Liberian government about an accompanying program to feed students during the longer school day, and that as a result many have dropped out due to the effects of hunger in the classroom.

“A child can not stay in school from seven up to almost four without feeding,” says Moses Flomo, chairperson of the Parent-Teacher Association in Cinta. Flomo claims that when representatives from Bridge presented their plan to take over the local public school, they assured parents they would work with the government and other charity organizations to implement a school lunch program.

But with the school year nearly finished, the program has yet to materialize, and Flomo says both Bridge and the government have been unresponsive to his appeals for them to address the issue.

“I have made requests several times for them to fulfill the promises they made,” he says. “Every time they say we should wait, even now.”

Flomo explains that under the public school system, children typically left school around noon to join their parents on the family farm, where they would share a light lunch of plantains or cassava. Most families in Cinta cook one large meal at night, and don’t have access to containers to pack a lunch for their children to bring to school nor the financial means to afford it. While an extended school day provides more class time for students, Flomo says the absence of the promised feeding program has led to a high rate of dropouts. 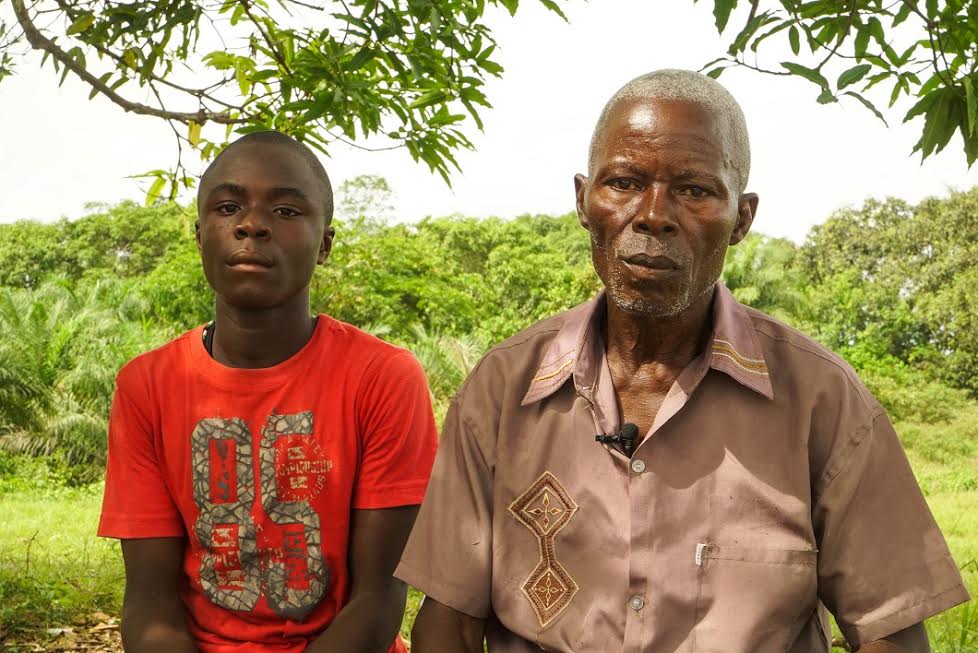 Samuel Nyah with his son Benedict, 16, a student at the Bridge-run Cinta Public School

“I’m not satisfied with Bridge partnership,” says Samuel Nyah, who has three children enrolled in the school. “They told us when they launched their program that they would have a feeding program, but they never fulfilled their promise.”

Nelson Gwe, chairperson of Cinta’s school board, concurs, saying the lack of food during the longer day has contributed to the reduction of class sizes in some cases to less than half of the 45 students who initially enrolled.  “Some days you will find only 20, or 15, or 18,” he says.

Binda says that some of her friends left school due to the discomfort of not eating during an eight-hour day. “When we’re on the campus, there’s nothing for us to eat and no safe drinking water,” she says. “And when we become hungry, we can’t pay attention.”

According to Binda, after dropping out of the school, a friend of hers became pregnant. “They said, we can’t stand the punishment, it’s too hard,” she says, explaining why her friends left school. “We can’t be here with hunger. At least when we’re in the town we can hustle and eat.”

Teen pregnancy in rural Liberia is a deeply rooted, complex problem, and the circumstances around a young girl becoming pregnant can’t be ascribed to any one factor. But experts say that girls who do not attend school are far more likely to become pregnant than those who do.

“Girls out of school are at higher risk of pregnancy given the prevalence of poverty and their vulnerability to sexual exploitation,” explains Lakshmi Subramani, acting country director of Action Aid Liberia. 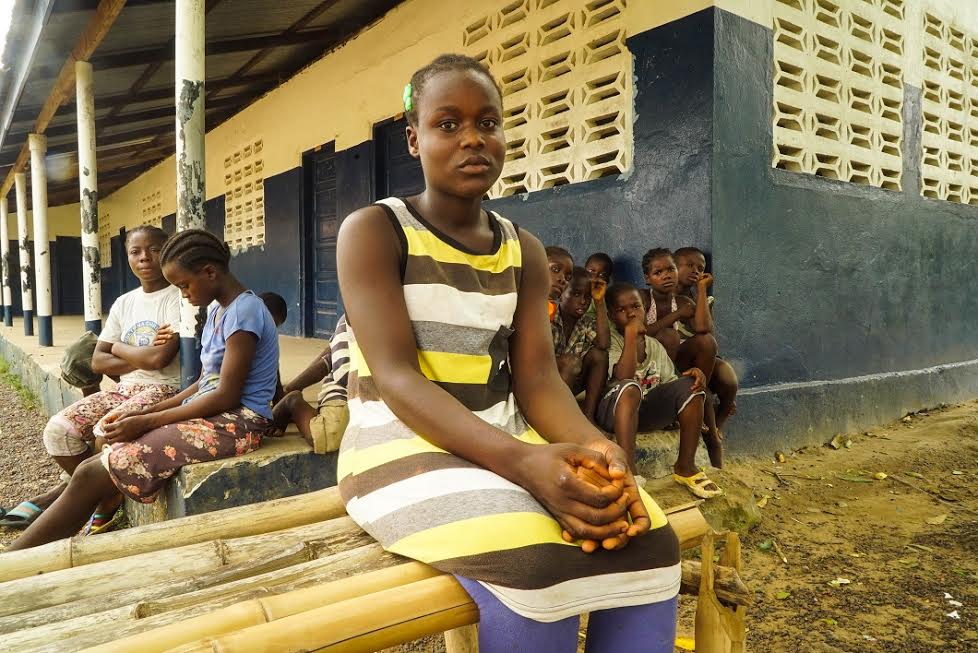 Sinneh Binda, 13, a student at the Bridge-run Cinta Public School

For students in Cinta who drop out of the Bridge-run school, there are limited options. The school is the only one in the town that doesn’t charge a fee, and the nearest public school is ten kilometers down a busy highway. Few parents in Cinta can afford the cost of transportation to send children to that school, and they say that if children leave the Bridge school they tend to join their parents in working on the family farm.

Representatives from the National Teachers Association of Liberia, an umbrella organization that collects dues from members and advocates on behalf of Liberian teachers, say that the problem of hungry students isn’t limited to Cinta, and that similar issues are popping up in most of the newly privatized schools across the country.

Cuts to Kindergarten and First Grade Cause Frustration Among Parents

Both Flomo and Gwe say that despite some reservations, most parents in the town were initially excited about Bridge, mainly due to the company’s use of computers in its lesson plans. But they say patience is now wearing thin. In addition to the lack of a feeding program, they say Bridge cut kindergarten and first grade from the school, causing frustration among parents who now have to supervise their young children during the day, and who are concerned they won’t be prepared to enter second grade.

To address the issue, parents in Cinta have pooled scarce resources and labor to begin construction of a makeshift kindergarten out of bamboo and sticks, although Flomo says the town is struggling to find funds to pay for a zinc roof. 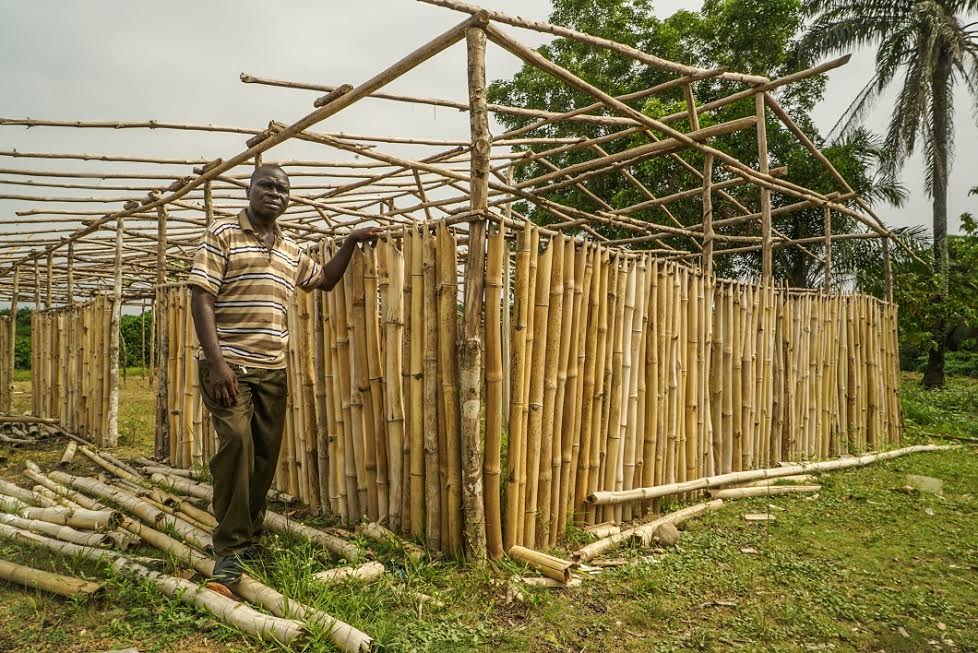 David Paye, a parent in Cinta, posing next to the makeshift annex the town is building to host kindergarten classes that were cut by Bridge.

“We really wanted to reject [Bridge] at the time,” says Gwe, describing the realization among parents that kindergarten was being eliminated from the school. “But by that time the contract was already signed with the government, so we couldn’t say any other thing.”

The Liberian government has signaled its intention to scale the partnership program upwards to as many as 100 additional schools next year, most of which are likely to feature the same extended school day. However, an update on the pilot circulated by the Liberian Ministry of Education in February makes no mention of issues related to school feeding. The report acknowledges the costs of running the schools have been high for providers, saying that “hard decisions will need to be made” regarding the need to keep the schools affordable. There is little to suggest that plans are being designed to feed students during the longer day, nor that the problem will be addressed in a potential expansion.

Multiple requests for comment sent to the Ministry of Education on the issue of feeding programs in partnership schools went unanswered.

“We are not feeling fine,” says David Paye, a parent of three students at the school in Cinta. “But we can’t do anything to them, because they got their agreement with the government. But the way they are functioning is not easy for we the parents.”

(*) Disclaimer: This reporting mission was supported by Education International.

>> View all NORRAG NEWSBite Blogs on the privatisation of education