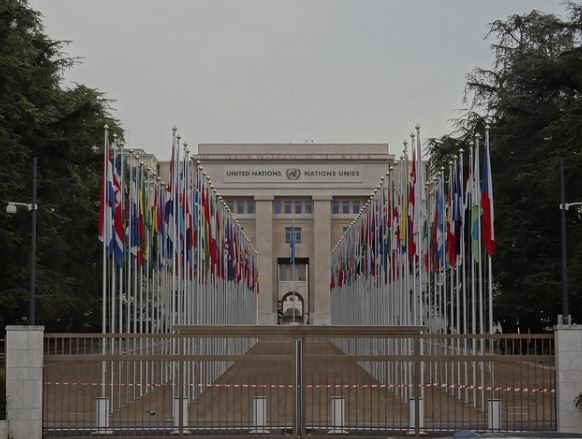 When we think of ‘International Geneva’ we may reflect on the unique role that a range of Geneva-based International actors play in managing, resolving and overcoming wars and armed conflict. We think of UNHCR, ICRC; OCHA, OHCHR and a range of smaller NGOs, such as Geneva Call and the Small Arms Survey, that work on aspects of violence prevention, mediation, reduction and peacebuilding. Geneva is often seen as a hub, a place to go to learn about, to act on and engage with contemporary conflicts. Education, on the other hand, has less of a name in Geneva, and the major UN institutions working on education – UNESCO, UNICEF, the World Bank are all located far away in either Paris, New York or Washington or just have a small Geneva office.

As a result, most Geneva-based institutions working on conflict rarely engage in issues related to education and training, leaving that to other agencies, operating in different countries around the world. Similarly, the major education organisations often underplay the role and place of war, conflict and violence in their work and instead focus on issues of education’s relationship to equity, economic growth and productivity. This is a big knowledge and practice gap, particularly in relation to the new Sustainable Development Goals (SDGs), where objectives such as SDG 4 (education), SDG 16 (Peace & Justice) and SDG 10 (Reducing Inequalities) overlap, at least implicity, in important ways, and we ignore these links at our peril.

In support of this argument I want to briefly make the case why education matters in relationship to war and peace. Firstly, to those groups and movements that take up armed struggle, educational demands are often at the centre of the debate. For example, this was true for the Revolutionary United Front in Sierra Leone and is true for contemporary armed groups such as the Taliban in Afghanistan and Boko Haram in Nigeria – though for very different reasons. Recent attacks on education infrastructure and education communities in Pakistan, Afghanistan and many other parts of the world have highlighted this link. Education also matters to civilians caught up in wars, to refugees displaced by wars and to elites who seek to reproduce their power and social movements which seek to challenge them.

Education is also a key social service – a key responsibility of the state – and it matters how it is funded, organised, and how resources are distributed across the system. How this system is governed, managed, organised can make a difference as to whether the education system is part of the problem or part of the solution to contemporary conflicts. Furthermore, the neglect of social service provision (both education and health) in contemporary UN peacebuilding missions has been recognised as a weakness by the UN Peacebuilding Fund, which is seeking to expand investment in social services.

As a result, those agencies working in Geneva in, on, or around conflicts need to be functionally literate in education and its relationship to war and peace. This knowledge gap is itself an educational gap. Those that work in conflict resolution, peacemaking and peacebuilding are often trained in disciplines such as International Relations, Conflict Studies and International Politics where education rarely gets a mention either in course contents or the key journals. Similarly, those that work in the major education institutions, such as UNESCO, UNICEF and the World Bank are often trained either in Education Departments or Economics Departments and similarly are not exposed to debates and discussions around education’s relationship to war and peace.

Bridging that gap is a crucial task for Agenda 2030 and International Geneva may well be a good place to break down those silos. With the Swiss Agency for Development and Cooperation continuing to prioritise ‘education’ in its work, there is also a strong incentive to bridge the work on conflict that they are already well known for and link it to the work on education and training. This would require specialised courses and training for conflict specialists on education’s relationship to conflict and greater opportunities for knowledge exchange between conflict and education specialists that work in or on conflict affected contexts.

[1] This blog is a personal reflection from a presentation at ‘The Governance of Education and Training: Agenda 2030 and Beyond’, held in Geneva, June 23rd, 2016, and organized jointly by NORRAG and the Swiss Development Corporation (SDC).  This explored the place of education and training in work that ‘Geneva International’ plays in Conflict and Peacebuilding

Mario Novelli is Professor of the Political Economy of Education, and deputy director of the Centre for International Education, University of Sussex. He is also a “Scientific Advisor” to NORRAG. Email: m.novelli@sussex.ac.uk

>> View all NORRAG Blogs on refugees/migration, conflict and Agenda 2030