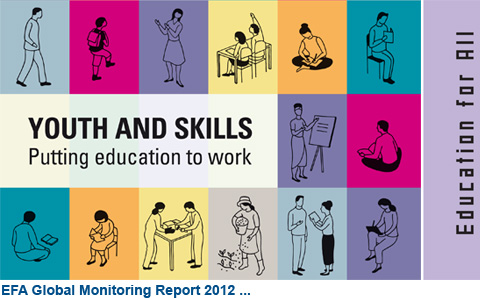 In the past six months on this site I have blogged both on the May version of UNESCO’s World Report on Technical and Vocational Education and Training and the World Bank’s World Development Report on Jobs. Now it is time, after having just hosted the UK launch event for UKFIET and the UK National Commission for UNESCO, to look at the UNESCO Global Monitoring Report 2012 on Youth and Skills.

The GMR itself acknowledges that it should be located within a larger set of readings on how to address youth (un)employment, and some of its absences with respect to analyses of both labour market realities and the post-school sector can be read as a reflection of the comparative advantage of others.

Rather, what the GMR tries to do is to stress the role that schooling needs to play in thinking about skills and work.  There is clearly merit in this, and some of the discussion of foundation and transferable skills is extremely useful, as is the emphasis on considering rural and urban informal employment locations when thinking about what schooling can do to be more effective in preparing young people for the various worlds of work.

However, from the perspective of someone who was among those in NORRAG lobbying over several years for this GMR report to be commissioned, I think that the connections into the territories of the two other reports are underdeveloped to the detriment of the GMR.

The GMR focuses on technical and vocational skills as being delivered by upper secondary education but this is a terribly school-centric view of a far more complex reality.  Most technical and vocational skills development does not take place in schools but in other sites such as public further education institutions, private colleges and, above all, workplaces of myriad forms.  Many of the world’s youth, including many of the poorest and most marginalised amongst them, are to be found in such learning sites, which are crucial to the GMR’s stated challenge of getting youth into work.

The report also does a disservice here in failing to explore the connections between schooling and post-schooling in a detailed manner.  We get no real sense of a position on what is best delivered in schools, and whether they might be better advised, for instance, to leave technical and vocational skills to providers better attuned to labour market realities, to employers of young people in particular.  Nor are we clear as to what extent schooling is a route out of poverty and marginalisation by itself.  Of course, this is part of the broader problem with the whole Millennium Development Goal – EFA edifice, which lacks a coherent model of development.

This links to a more profound disappointment at the missed opportunity of this GMR.  One of the reasons many of us gave for wanting a GMR on skills, and why the GMR team were initially so hesitant about taking up the challenge, was the interwoven problems of definition and data.  What the 10 GMR reports have been most important for, in my opinion, relates to the “monitoring” term- the generation of new and better data on education for all, its analysis and its communication.  There is much to celebrate too in this GMR in its early chapters and its World Inequality Database on Education.  However, what this GMR has not done is to generate significantly improved data on vocational education and training or offer new methodological insights into how to measure either VET or progress against EFA Goal 3.  Moreover, it has not been able to resolve the perhaps intractable problem of what skills meant to those who framed Goal 3 in Dakar and/or what we should do with Goal 3’s highly problematic and incoherent notion of skills. Nor has it proposed a research agenda towards filling in these gaps, in contrast to the WDR and TVET reports.

One of the things that is striking across these three reports, indeed, is the way that words like skills and development are being used to mean very different things.  Diversity is a good thing but the lack of a shared vision makes the thought of generating any post-2015 skills goal seem a greater challenge than it should be.

Thus, whilst I applaud the GMR team for insisting that access to quality primary and secondary education is important when thinking about skills and work, I think it was a missed opportunity to fail to engage with thinking about how skills in a more conventional, vocational sense are linked to the need for discussion about the roles that jobs, work and production should play in an overall development agenda.

Simon McGrath is Director of Research and Professor of International Education and Development, Faculty of Social Sciences, University of Nottingham. Email: simon.mcgrath@nottingham.ac.uk