What kind of education and what kind of development do we want in the Occupied Palestinian Territories (oPt) post-2015? 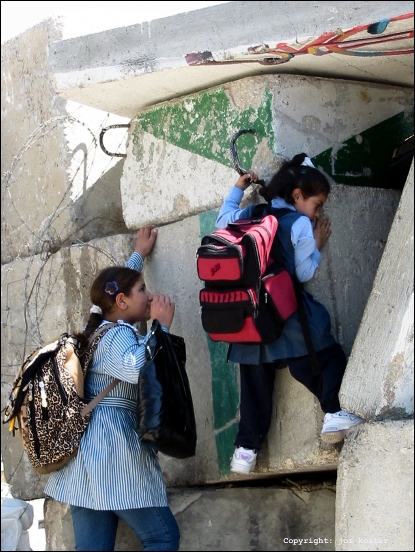 School children trying to pass to their school through the separation wall.

In this blog, I would like to comment on the experience of the oPt, which is not only part of the Global South, but has been under Israeli occupation for decades. The oPt exists with the difficult status of having two authorities and separated territories, with people in refugee camps for three to four generations and with daily human rights violations that have become the norm, here at least [i]. The oPt’s post-2015 agenda needs to emphasize the issue of rights, security and the protection of people. But this agenda is unachievable without quality education that is both rights-based and skills-based.Education and skills development for Palestinians remains an ultimate goal for each family, especially after the loss of land in 1948. Such perception has lead to an increased number of Palestinians completing their basic education, and with many moving on to higher education or technical and vocational education and training (TVET) over the years.

These positive enrolment indicators in the education sector are not reflected in the labour market; on the contrary, unemployment percentages are high among youth, reaching almost 40% during the last decade. Although for Palestinians the Israeli occupation measures and practices hinders economic development in the oPt, across the Arab region similar indicators of high youth unemployment are seen (although these rates are much higher in the oPt because of occupation). In addition to Israeli measures limiting economic opportunities, social norms and attitudes have affected female participation in the labour force. For example, although indicators reveal similar male/female annual graduation rates, statistics also indicate higher unemployment rates among female youth (over 50%) and lower women participation rates in the labour market in general. Studies have linked the extent of female participation in employment with attitudes towards women’s role in the society as the main family care-taker. Hence if job opportunities appear, male employment is prioritized. This raises the question: what sort of education do we need? Does the education provided respond to both the aspirations of the youth, as well as to the socio-economic development needs of the oPt and the region?

As a researcher, I have conducted various studies on labour market needs. The literature points to a large gap between, on the one hand, what the education system provides and how it is provided, and, on the other hand, the demand of social and economic development.

I have come across educational deficiencies in various sectors as people are not able to link theory with practice, or apply knowledge to different settings, and are hence unable to make use of acquired knowledge. Their weak and non-transferable skill set translates into a weak ability to drive their personal development and success, and to a weak ability to contribute to the development of the Palestinian public and private sectors. What sort of education is required?

I previously worked as a lecturer in two Universities in the Engineering departments and am quite critical of how we teach science, engineering and technology. Students lack practice, hands on work-experience, as well as problem solving skills and critical and logical thinking; all very important if one wants to be a competent engineer! Hence graduates need extended work experience in the market to build up required competencies and skills.

Many people still perceive TVET as a second option. But it is increasingly the first option for young people, including the marginalized, as various success stories has emerged. Perception and attitudes are the main engines behind educational choices, streaming in education (ie. vocational versus general education streams) and women’s participation in the labour force.

Therefore I ask again: What sort of education is needed? I would argue that post-2015, the quality of education needs to be high on the agenda in the oPt, so that Palestinians have the needed skills to help them in their own, and in their nation’s, social and economic development, and in their understanding and their achievement of their human rights.

Palestinians have indicated ending occupation and state building as their main national goals; goals that are expected to remain post-2015. These national goals could only be realized with the support of the international community. Hence increasing awareness on human rights issues among Palestinians, Israelis and the international community, and increasing commitment to it from all sides, will enable the achievement of rights for the region, and hence would enable Palestinians to realize these national goals. The global learning of human rights, including the UN declarations and ratified resolutions, is a pre-cursor to being able to practice and demand such rights, and is important not only to Palestinians but for world peace at large.

In looking at the regional set-up and lack of realization of rights in many nations, the issue of education that could develop awareness, and participation as well as citizenship is lacking. Hence education that is based on memorizing information, rather than developing critical thinking and citizenship skills has hindered development and the realization of rights. It has also helped to sustain traditional structures in the region; structures which youth and people are rejecting in the Arab Spring.

I would like to thank the UN and NORRAG for opening up the opportunity for international dialogue on post-2015, but national debates are important as well. The oPt is not, of course, among the six Arab States to be included as part of the UN country post-2015 consultations. It is important that the Palestinian voice is also heard in the post-2015 debates, not least because of its situation of trying to develop and plan under decades of Israeli occupation.

MDG progress is reported for the Palestinian territories, but the MDGs are not really part of the national debate as such; national debate is overwhelmed with the challenges of living under occupation and the daily effects that result from this. The Palestinian education sector strategy highlights quality education as one of four strategic aims for education and higher education, with a strategy that is embedded on the agenda of rights. But again, is it enough? And how is progress towards the achievement of national and youth priorities reflected and monitored for the Palestinians, and the international community at large?

Education post-2015 should, on the one hand, help to enhance soft-skills and skills for work, and, on the other hand, should promote human rights, citizenship skills and allow for peoples’ participation in their own freedom and development. Ways, means and tools to achieve and monitor this goal will have to be developed and become operational.

[i] Please see www.ocha-opt.com for UN independent information on the daily violation of human rights in the oPt.

Randa Hilal is a TVET and Strategy consultant, Director and owner of OPTIMUM for Consultancy and Training, with life experience in education and TVET, conducted various consultancies and studies on TVET and education with gender and development perspectives, in oPt and the region, email: rhilal@optimum.ps