The contested notion of citizenship

The notion of citizenship has traditionally referred to membership of an individual to a political community defined within the contours of the Nation-State. As such, citizenship is often a contested notion, subject to a variety of interpretations, particularly in divided societies. Moreover, the full set of rights associated with citizenship may be denied to certain minority groups, including migrant groups, and refugees in particular. As a result, any attempt to transpose the notion of citizenship beyond the Nation-State to the global level thus becomes even more problematic.

Towards post-national forms of citizenship?

It is however important to recognize that the traditional conception of national citizenship is changing in today’s world. Globalization is creating new economic, social and cultural arenas beyond national borders (Law, 2004) and contributing to “the emergence of locations of citizenship outside the confines of the national state” (Sassen, 2002). These “post-national conceptions of citizenship” are partly linked to transnational civil societies and political communities, as well as to emerging forms of global activism. Yet, despite these transformations, it is important to stress that the State remains the most important location for citizenship, both “as a formal legal status and a normative project or an aspiration” (Sassen, 2002).

If the notion of ‘global citizenship’ cannot be expressed in any legal manner, it can nevertheless be “expressed in other ways that may have a significant and profound impact on the development of civic engagement and citizen-state relations” (Lagos, 2003). Globalization, and the growing acknowledgement that individuals around the world are increasingly, directly and indirectly, interconnected and interdependent beyond the local communities and Nation-States to which they belong, is making cosmopolitanism not only a reality, but a necessity (Appiah, 2008). ‘Cosmopolitan citizenship’, rather than ‘global citizenship’, may therefore be a more accurate and appropriate way of capturing the transformation of citizenship in the context of globalization.

Education as a process of civic and political socialization

In addition to contributing to socio-economic development, education systems have fundamental social, civic, and political functions related to the formation of citizenship, and to the strengthening of national cohesion. In doing so, they have a crucial role in promoting the necessary knowledge, skills, and values to enable learners:

This social, civic and political function of education is most commonly explicitly articulated in curriculum policy and design as citizenship education, understaood as a broad area of teaching and learning considered to be an essential part of the formation of citizenship in any given context. Having said this, the broad and often contested nature of citizenship education can lead to a range of interpretations and approaches. These diverse interpretations represent a continuum of educational approaches to citizenship ranging from more minimalistic and conservative ones aimed at the reproduction of the existing social order, to more ambitious and critical ones aimed at adaptation to change, if not transformation of social dynamics (McLaughlin, 1992; Kennedy, 1997; Kerr, 1999).

Figure 1: Continuum of approaches to citizenship in education 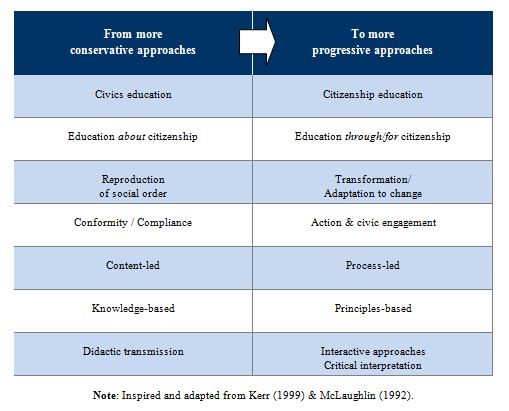 The political dimension of citizenship education

Regardless of the approach adopted, citizenship education remains a key policy domain of national importance. As such, the scope of citizenship education is determined, to a great extent, by the nature of national political systems, power constellations, and public policy decision-making processes. How are the social, civic and political functions of public education systems defined? Which stakeholders take part in the process of policy dialogue and who is excluded? How are competing/conflicting views about the basic social, civic and political goals of education reconciled? Indeed, as Davies (2006) rightly asks; “who decides what a citizenship curriculum should look like […] and in whose interests do such definitions operate?” This key socio-political dimension of education is often overlooked in international development discourse in favour of a focus on the more a-political socio-economic purposes of education.

If citizenship education remains the preserve of sovereign states, it has been argued that a number of ‘global trends’ present a set of common challenges for all societies and countries around the world. The intensification of globalization is leading to greater collective acknowledgement that individuals and local communities are affected by global processes, and, in turn, that they may also affect them. These global phenomena or ‘civic megatrends’ (Kennedy, 1997) are being increasingly acknowledged as constituting important components of citizenship education in many countries. ‘Global citizenship education’ is arguably nothing more than ensuring that this global dimension enriches and strengthens the relevance of existing national or local citizenship education.

Education for ‘global citizenship’ as a framing concept

The multiple processes of globalization – whether economic, technological, environmental, or political – are progressively transforming traditional conceptions and practices of citizenship. However, despite these transformations spurred on by globalization, the legal basis for the definition of citizenship, as well as its practice, still remain very much located within the Nation-State. It is the tensions related to this changing reality that explain, in part, at least, the possible confusion and potential resistance encountered when a notion such as ‘global citizenship’ is introduced within international development discourse. In reality, the notion of ‘global citizenship education’ refers to attempts to introduce issues of global concern, and elements of an emerging global civic culture, into existing formal or non-formal education programs. In short, ‘global citizenship education’ is nothing more than an adaptation and enrichment of local and national citizenship education programs to the context of intensified globalization.

>> For the full version of the paper this blog is based on, and references cited in this blog see: UNESCO ERF Working Paper No 7 Education for ‘Global Citizenship’: A framework for discussion

The term ‘Fuzzword’ in the blog title is taken from Cornwall and Esade’s Deconstructing Development Discourse: Buzzwords and Fuzzwords (2010).