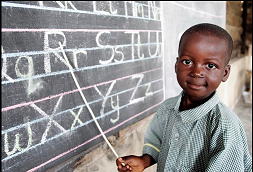 To build the basic human capital covered by the six EFA goals is an indispensable development stage that no country can leapfrog: It must be done. To reach these goals (though some may need to be reformulated) must therefore remain a top priority up to and beyond 2015 even as countries address higher-level skill needs. This will present a much greater funding challenge for SSA than for other regions. First, SSA’s population of primary school age is projected to grow by 41% (54 million) between 2010 and 2030. This compares to 6% in North Africa and a decline in all other major regions. Second, SSA has a much larger need for catch-up growth than other regions:

(ii)   In 2010, 24% (31 million) of SSA’s primary school-aged children were out of school (12% in South Asia, and 5% in East Asia and Latin America). About 25% of these are expected to enter school as late entrants and 20% are early dropouts. Capacity must be created to enroll the remaining 55% who disproportionally are in conflict-affected countries, from poor families, in rural areas and girls. The unit cost of enrolling these children will often be higher than for those now enrolled.

(iii) The early dropouts and non-entrants feed the existing large group of illiterate youths. In 2015, 25% (44 million) of those aged 14-24 years are projected to be illiterate (12% in South Asia, 2% in Latin America and 1% in East Asia). “Second chance programs” must be provided for these youth if SSA is to solve its adult literacy problem: In 2015, 30% of men and 48% of women aged 25 years and above are projected to be illiterate.

(iv) Since the mid-1970s, more than one-third of those entering primary school drop out prior to the last grade. Quality is alarmingly low even for those completing the cycle.

Progress in the above areas requires both better use of existing resources and more resources. There is good scope for improving quality and internal efficiency through more strategic deployment and better management of teachers, improved accountability for teachers and principals, and provision of more and better training materials. Progress in these areas is often constrained more by weak technical capacity and political resolve than shortage of funding. But such constraints often prove more difficult to address than funding constraints. However, there is limited scope for financing the expansion needed by squeezing more out of existing resources: At 43, the pupil-teacher ratio in primary education is high and, despite some improvements over the last decade, teacher salaries are low (in real terms, not higher than in the mid-1970s). Thus, the expansion will require a massive increase in the number of teachers and classrooms and, thus, in funding, especially if pupil-teachers ratios and salaries are to improve.

What is the magnitude of the funding needed? Universalization of a nine-grade basic education cycle by 2030 would require almost doubling the current number of teachers and classrooms in primary and lower secondary education even at current high pupil-teacher ratios. Similarly, providing all children with one year of pre-primary education would mean almost tripling enrollment. And the funding must be mobilized in a context where rapidly growing pressure on post-basic education is already driving down the share of both domestic and external education funding allocated to basic education.

What are the prospects for domestic fund mobilization? This will increasingly be by far the most important source of funding. In turn, given that education already claims a higher share of public budgets in SSA than in other regions, achieving sustained economic growth at a high level is by far the single-most important determinant of domestic funding. The last five decades illustrate well this point:

What level of growth in funding will be required up to 2030? As an illustration, at constant salaries, a doubling of the number of primary school teachers between 2010 and 2030 would mean a 3.5% annual increase in the salary budget. The increases in the capital budget will be higher (small schools in rural areas); the same applies for recurrent and capital costs for pre-primary and post-basic education. Thus, total education budgets would likely need to increase annually by 5-6%, with wide country differences.

The good news is that, if SSA can maintain its 2010 share of GDP allocated to education (4.7%) and sustain GDP growth at the 2000-2010 rate (5.4%), the region should be able to generate the needed domestic funding. And experience shows that rapid catch-up growth can transform societies in one generation. But history also shows that such growth is far from automatic: It takes good policies and strong political leadership.

Despite the predominant role of domestic funding, aid will continue to play an important role in many low-income countries by funding basic education directly as well as indirectly by stimulating economic growth, widening the tax base and improving tax collection. Therefore, the recent stagnation of aid – overall and to education – is of great concern. Also, available education aid must become more strategically targeted on supporting basic education in countries and for population who have missed out on this basic human right.

Birger Fredriksen is a consultant based in Washington. Before retiring, he worked for 20 years in the World Bank including as Director for Human Development for Africa, and 12 years in the OECD and UNESCO. Email: birger.j.fredriksen@gmail.com