By Randa Hilal, OPTIMUM for Consultancy and Training, Ramallah, Palestine. 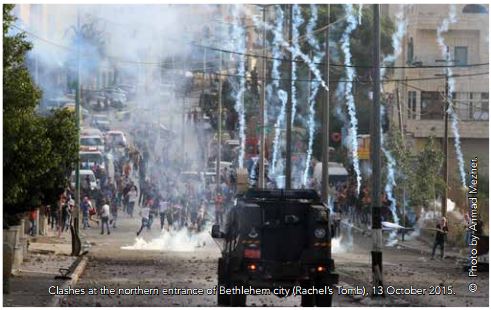 How can Vocational Education and Training (VET) reduce the inequalities related to gender, youth, and refugee status and contribute to human development? This is the key research question I am exploring using the case of Palestine, looking through a human rights and a human development lens.

The context of occupation

The overall situation is a protection based crisis, with negative humanitarian ramifications. This crisis in oPt stems from the prolonged occupation and recurrent hostilities, alongside a system of policies that undermine the ability of Palestinians to live normal, self-sustaining lives and realize the full spectrum of their rights, including the right to self-determination. Were these factors removed, Palestinians would be able to develop their government institutions and economy without the need for humanitarian assistance.

VET’s role in reducing inequalities in the context of occupation

In analysing marginalisation, my own research considered – in addition to the categories of women, youth and refugees – those who are living within the political marginalised localities due to occupation measures and policies. UN OCHA identified those living in marginalised localities as those living in Area C and the Seam Zone[2] as well as those living in Gaza and East Jerusalem. According to the humanitarian needs overview, UN OCHA has estimated the number of Palestinians in need at 1.9 million (of the 4.5 million Palestinians living in oPt), out of whom 298,000 are East Jerusalem residents, with a similar number living in Area C of the remaining West Bank, and over a million living in Gaza.

In the course of my research over 850 people were consulted, including 746 graduates who filled the survey during the period January-July 2015. Various groups of policy makers, TVET institutes heads and teachers, employers, communities as well as academic teachers and school staff also participated in the research. 31 VET Institutes were interviewed, representing the different providers in the oPt, including: the Ministry of Education, Ministry of Labour, Ministry of Social Affairs, other ministries, Non-Governmental and Church related and UNRWA, within the whole of the oPt areas (the West Bank, including East Jerusalem, and Gaza).

Some of the findings of the study include:

Findings suggested high economic effects and social empowerment of VET upon youth graduates and those marginalised. Nevertheless, fulfilment of aspiration and functioning of these capabilities were low and reflected the increasing external challenges faced by youth, and were lower than a similar group analysis four years ago.[4] This is an alarming signal, and indicates that all developmental effects and achievements of VET and its contribution to human development could be jeopardised by the low national commitment to skills formation policies and systems and most importantly by the overall context of occupation and its socio-economic effects.

This blog is based on a presentation made at the 13th UKFIET International Conference on Education and Development, “Learning for Sustainable Futures – Making the Connections” 15th to 17th of September 2015. It draws on the author’s PhD Research on “The Value of VET in promoting human rights, advancing human development and reducing inequality: The case of Palestine”.

Randa Hilal is  the General Manager and Founder of OPTIMUM for Consultancy and Training, Ramallah, Palestine. She is also a PhD candidate at the University of Nottingham, UK. Email: rhilal@optimum.ps

[1] Under the 1993 Oslo Peace Agreement, the West Bank was divided into three areas: A, B and C. Area A is Under Palestinian control and includes the main cities and populated areas, Area B is under joint Palestinian-Israeli control, and Area C is under Israeli Control. Area C cuts across the whole of the West Bank and covers 60% of West Bank land. Key humanitarian concerns related to Area C – according to the UN – can be reviewed here.

[2] The Seam Zone is the area between the Barrier/ Wall and the 1949 Armistice Line (Green Line). The Wall is 712km long, more than twice the length of the Green Line. 85% of the Wall runs inside the West Bank, and in 2004 the International Court of Justice found that the Wall was in violation of international humanitarian law.

[3]  Part of the current survey included  similar questions as part of a research presented at the 2011 UKFIET Conference  (see Hilal, 2012 – Vocational Education & Training for Women and Youth in Palestine: Poverty Reduction and Gender Equality under Occupation, International Journal of Education Development, Vol. 32, No. 5, Sept 2012, 686–695, Elsevier

>>View all NORRAG Blogs on TVSD