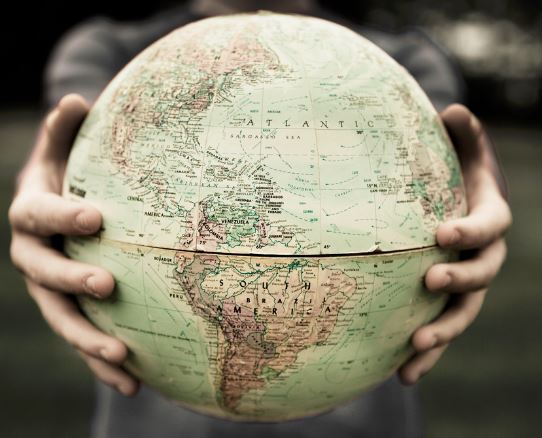 Understanding the shifting nature of governance in education and training (GET) is crucial when considering the implementation of the Education 2030 agenda. A public conference organised by NORRAG, in collaboration with the Education Network of the Swiss Agency for Development and Cooperation (SDC) examined this topic (see below for details).

“a vertical dimension of governance of new and emerging actors and trends operating at different levels of governance; and a horizontal dimension looking at education and training from a transversal dimension running across the sustainable development agenda.”

The vertical and horizontal dimensions are useful frames to ensure that we don’t just focus on one particular actor or issue when discussing education and training, but rather the complex interactions among different actors and issues. It also helps us clarify the sometimes cumbersome concept of “governance”.

According to UNESCO, education governance can be defined as “the processes, policies and institutional arrangements that connect the many actors in education.” This definition alludes to interactions among diverse and interdependent actors, operating in local and global spaces and working according to some common standards or norms.

Importantly, governance does not imply a unitary system; there can be overlap or conflict among different actors and systems of governance. By considering the diversity of actors across different spaces and levels of governance (vertical), and at the connections across diverse issues (horizontal), this event aimed to highlight some of those interactions.

Many participants would agree to an ideal case scenario, that education is a global public/common good. If we take that as a starting point, particularly in light of Agenda 2030, it would imply a global system of GET. However, the fundamental responsibility of implementation continues to lie with governments and their differentiated responsibilities.

As a result, the importance of the state’s areas and means of intervention cannot be ignored when trying to address pressing education concerns, as Chantal Nicod, SDC’s Head of West Africa Division and Education theme asserted:

“Unlike other global issues, such as climate change, when we talk about education the solutions are seen primarily at the national level.”

In short, we cannot talk about GET without highlighting the importance of states, what might be called national GET. During the event, participants from China also underlined the important role played by relatively centralised decision-making and implementation systems at the national level.

The event also addressed the growing number of non-state actors – such as civil society organisations, the private sector and foundations – that can influence education and training policies and practices at the local, national, regional, transnational and global levels. For example, there is a growing market for education globally, as illustrated by the rise of “edu-business” and its associated problems: when education – traditionally regarded as a public good provided at the state level – becomes partly a private good globally with actors increasingly influencing the standard setting in the field. We might refer to this as non-state GET.

However, by looking at the governance of education and training across these layers – in terms of national GET, international GET, non-state GET – we can miss out on the complex relationships among them. One example of a “hybrid” governance arrangement is the new type of partnership forged among state-funded foundations in the Gulf, the private sector and UN agencies, giving a sense of legitimacy to governments in the region.

With many actors in the GET field – each with different motivations, interests and power to affect outcomes – we increasingly have a blurring of the GET landscape. The variable and complex interactions across the above-mentioned systems of governance, encompassing all the actors that have a role to play in the shaping of education and training policies and practices, entails the global governance of education and training (GGET).

In theory, GGET transcends geographic boundaries given the diversity of actors and interests operating globally. In practice, anchoring the GGET debates in a particular location could be an opportunity to build a community of interest, and to drive continuous and targeted discussions around it.

Geneva, with a strong global presence in areas of conflict, emergencies, nation building, health, and an increasing role in the CVE/PVE (Countering/Preventing Violent Extremism) discussions, could be the place to start stitching together different issues , and to further promote the transversal nature of education and training emphasised in Agenda 2030.

The Geneva Conference Series on the Global Governance of Education and Training aims precisely at unpacking some of the challenges raised in this blog, while at the same time connecting a broad range of actors. It will especially look at the interactions between the specifics of GET with the overarching nature of GGET. The first sub-theme explored as part of this Conference Series was learning assessments and their impact on quality education.[1] NOR

RAG will capitalise on its expertise on the subject and its added-value as a convenor and knowledge broker to explore further aspects of GGET over the coming months. Upcoming activities and related knowledge products will be announced soon on NORRAG’s website.

[1] Entitled “Learning from Learning Assessments: The Politics and Policies of Attaining Quality Education”, this one-day event was organised jointly with the Center for Universal Education at Brookings, in association with PASEC, on 23rd June. 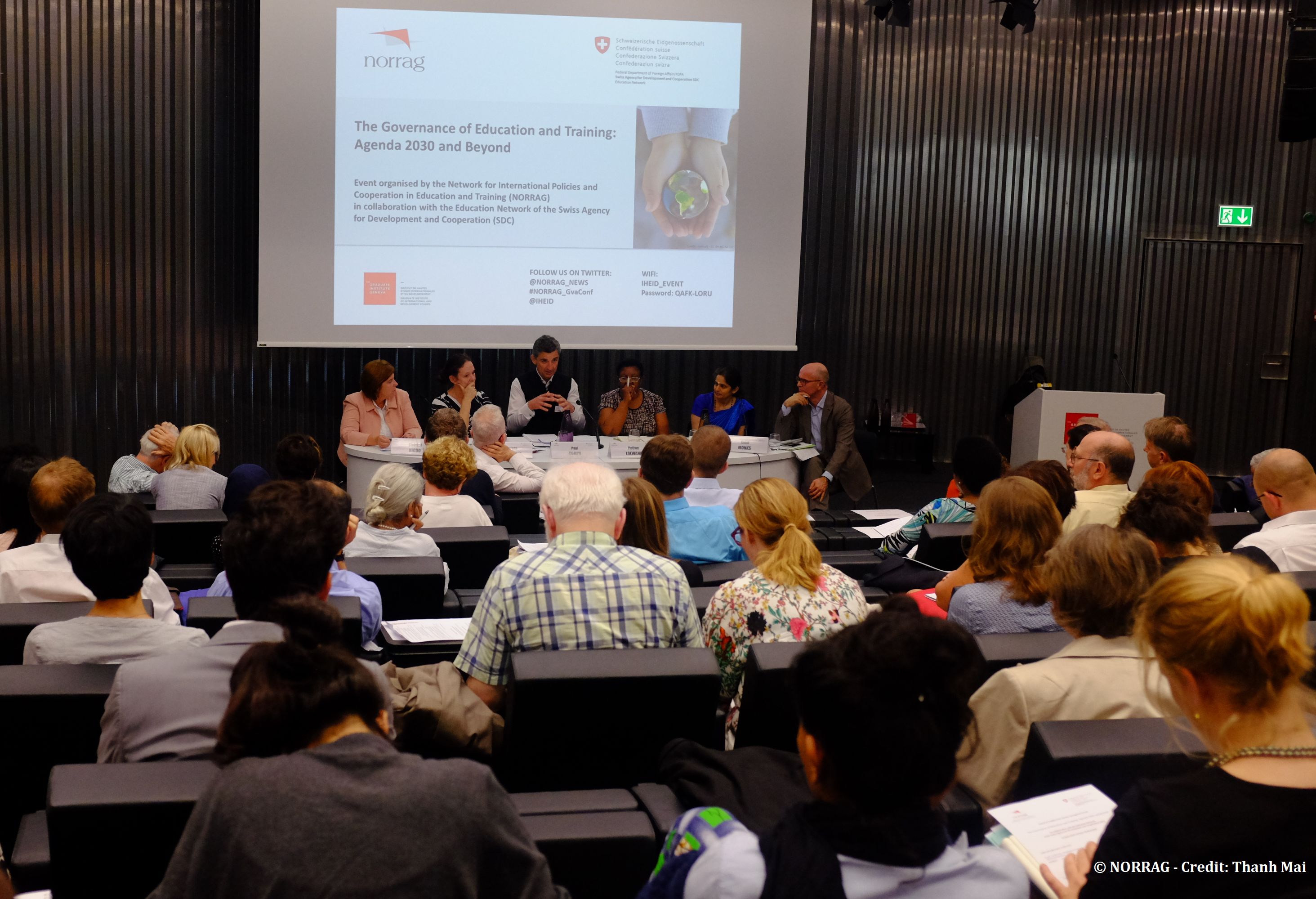 This blog is based on takeaways and reflections from the public conference on the theme of “The Governance of Education and Training: Agenda 2030 and Beyond”, organised by NORRAG, in collaboration with the Education Network of the Swiss Agency for Development and Cooperation (SDC) on 22nd June 2016 at Maison de la Paix in Geneva, Switzerland. This event inaugurated NORRAG’s new Geneva Conference Series on the Global Governance of Education and Training.

The meeting brought together over 70 participants from international organisations (such as the ILO, UNICEF, UNRISD, GEM Report – UNESCO, UNDP), international NGOs, the Swiss Federal Department of Foreign Affairs, academia, think tanks, foundations and education providers, as well as NORRAG’s partners and national government officials from the global South.

Radu Bârză is a Master Student in International Economics at the Graduate Institute of International and Development Studies in Geneva. He also works as a trainee for NORRAG. Email: radu.barza@graduateinstitute.ch

Laetitia Houlmann is working as a consultant in international education and training, in particular in the field of development cooperation. She is currently in charge of the backstopping of the SDC Education Network. She worked as a Communication Officer at NORRAG between 2012 and 2015. Email: laetitia.houlmann@gmail.com

Velibor Jakovleski is a Programme Officer for the Programme for the Study of International Governance at the Graduate Institute in Geneva, Switzerland. He is also a Research & Project Officer for NORRAG. Email: velibor.jakovleski@graduateinstitute.ch

˃˃ The Governance of Education and Training Agenda 2030 and Beyond: Perspectives from Sub-Saharan Africa – By Peliwe Lolwana, University of Witwatersrand, South Africa.