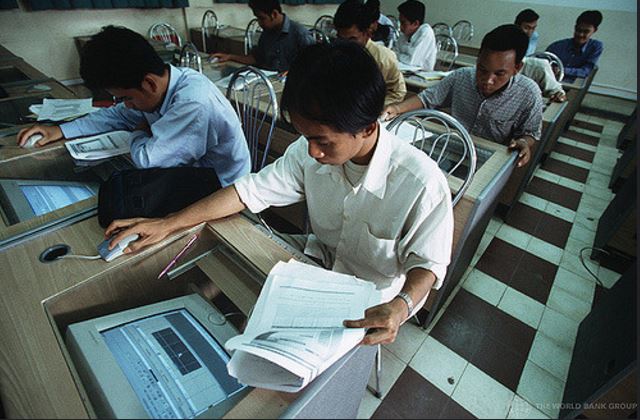 Education privatisation has become an important topic in the global education agenda, particularly in the context of Southern countries, where this phenomenon is increasing rapidly. Among the most emblematic policies promoting the involvement of the private sector are charter schools, voucher schemes, the contracting out of private schools, or the promotion of low fee private schools. These policy solutions advance under different rationales. They are usually presented as a way to expand access to education efficiently, but also as a way to increase the quality of the education system, foster innovation and/or promote education diversification. However a broad range of scholars, civil society groups, teachers’ unions and international organizations are expressing their concern about the possible negative effects on the right to education and inequalities of these kind of policies. In spite of this debate between advocates and critics, the fact is that the enrolment in private schools has experienced a significant and constant growth in the last years, particularly in low and middle-income countries (see figure below). 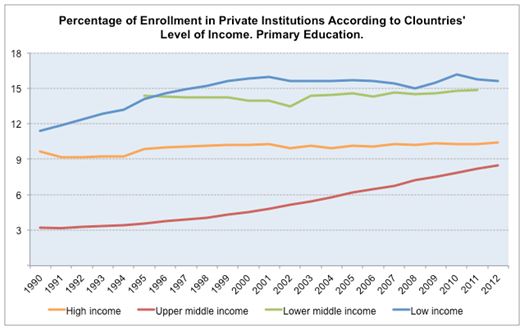 Although there is a common trend towards more involvement of private actors in education worldwide, education privatisation is not a monolithic process. The analysis of the processes of education privatization worldwide shows how national and sub-national governments are engaging with these policies for very different political, economic and/or social reasons, and in very different circumstances. Specifically, following a systematic literature review on the political economy of education privatisation (involving the review and synthesis of 227 studies), which we have published recently with Teachers College Press, we have identified that there are at least six different paths toward education privatisation. These different patterns (or clusters of frequently associated actors, mechanisms, and economic, political and social circumstances) clearly reflect such diversity of processes, and are illustrated with their most paradigmatic cases:

Overall, education privatization is a global phenomenon affecting countries regardless of their income level, but is far from translating into a homogeneous set of policy outcomes and processes. The different paths described above show how education privatization is adopted for different reasons and crystallizes in very different policy arrangements depending on political, economic and social factors. Existing literature on the topic shows how material factors (such as economic crisis, budgetary restrictions, or humanitarian crisis) but also factors of an ideational nature (such as the legitimacy crisis of the welfare state, the hegemony of the neoliberal paradigm in the political sphere, or the “public education in crisis” frame) have an important role in promoting privatization policies and as a drivers of their political adoption. In addition, privatisation processes appear to be the result of a complex interplay of global and local forces. While changes at a global scale (including economic recessions or the spread of the neoliberal doctrine) have a crucial impact in the advance of education privatisation, factors of a more domestic or situated nature are also importantly at play. Elements such as the welfare-state tradition or the ideology of the government in power inevitably condition the scope and nature of the privatisation processes embraced by different countries.

Nowadays, education privatization represents one of the most important challenges for national education systems, and has major implications for the governance, organisation and access to education worldwide. The expansion of market-oriented policies, together with recent changes in contemporary social structures, favour the expansion of consumerist values in education, and the increasing conception of education as a form of social distinction. Ultimately, the commodification of education contributes to increasing the tension between the individual and the social goals of education (with the latter including the acquisition of a common culture and the promotion of social cohesion), and promotes the segmentation and hierarchization of education systems.

Currently, a broader range of political forces and social groups – that go beyond the traditional conservative parties and the middle and upper classes – accept and promote private sector participation in education. This “private education consent” is actively and effectively manufactured by influential international actors and advocacy coalitions. The hegemonic dimension that education privatization is acquiring explains, to some extent, the expansion of private education globally. Furthermore, despite privatisation reforms rarely going unchallenged, responses against privatization reforms have met with uneven success so far. Understanding how and why education privatization happens is a first and necessary step to organize better-articulated and more meaningful responses to this global trend.

[i] Although we use the denomination United Kingdom, the literature analyzed mainly focuses on the cases of England and Wales.

Antoni Verger is senior researcher at the Department of Sociology of the Universitat Autònoma de Barcelona. His main areas of expertise are global governance and education reform. Email: tverger@gmail.com

Clara Fontdevila is a PhD candidate at the Department of Sociology of Universitat Autònoma de Barcelona. Her research focuses on private-sector engagement in education and the global governance of education. Email: clara.fontdevila@gmail.com 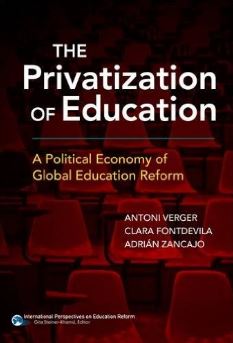 Verger, A., Fontdevila, C. and Zancajo, A. (2016) The Privatization of Education: A Political Economy of Global Education Reform. International Perspectives on Educational Reform. Teachers College Press.