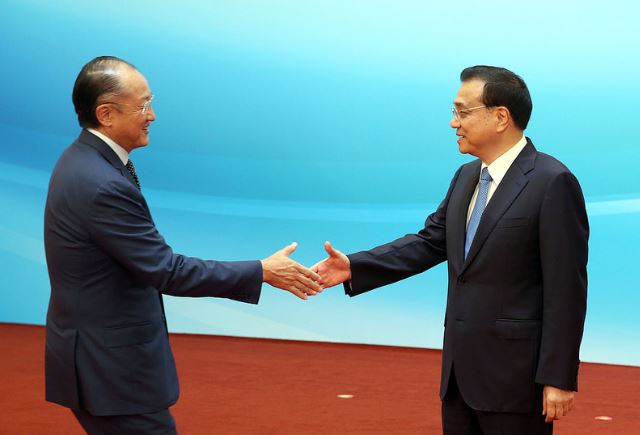 Some reflections on China’s role and positioning:

Representatives from developing countries, including China, are disproportionately under-represented in the process of global agenda making and implementation. For example, only one fourth of the positions of the UN System that China can have according to its membership dues are occupied by Chinese staff.

China is such a populous country that “domestic progress” in China itself has the influence over global processes; in other words, our educational progress itself has great influence on the world. China’s achievement of universal education and rapid growth in the gross enrolment rates of secondary and higher education (87% and 40% in 2015) is a great overall contribution to the global human resource development process. Shanghai’s PISA and TALIS (Teaching and Learning International Survey) rankings have resulted in a wave of discussion about what can be learned from Shanghai.

It is important to see an actor’s influence – like China’s – in the global governance of education and training in a dynamic perspective – looking at trends and progress over time. In NORRAG News 52 I talked about China’s increasing aid to African countries (for example in the 8 years from 2006 to 2014, the Chinese government scholarship quota increased by over 290%). In a similar vein, between 1990-2015, China actively participated in south-south cooperation and assisted more than 120 developing countries to implement their Millennium Development Goals. In a change from the past, all levels of Chinese government and some non-state organizations in China have now begun cooperation with more and more multilateral organizations. Taking the cooperation with UNESCO as a case, Shenzhen Municipal Government has supported UNESCO to establish the centre for higher education innovation in Southern Technical University. The China Academy of Engineering, associated with some famous universities, has supported UNESCO to establish the centre for higher engineering education. All these centres are to serve global aims.

Emerging actors’ increasing participation and competition in global governance offers the opportunity of making global governance more effective overall. For example, emerging countries’ experiences may be more suitable for other developing countries such as African ones as lessons or good practice. For example, some professors and international students from Africa said that they want a centralized government like China to assure effective policy implementation; they point towards having too many policies and plans not successfully implemented, and too many goals not achieved. China can provide a contrasted good practice or offer alternatives to solutions offered by western countries.

There are some barriers that China faces with regard to accessing or influencing the quickly evolving scene of global governance. For example, language is a very serious problem for us; it is difficult for us to express our opinions on the international stage and to teach and manage international students on the domestic stage. Many documents published by international organizations only have an English version, which increases China’s cost to learn and understand. Many international students speak English which increases the cost of teaching and managing. In many respects, China also still lacks the experience and capacity to participate in global education governance.

Xiulan Wan is a Professor and the Deputy Dean of the Institute of International and Comparative Education at Zhejiang Normal University, China. Email: wanxiulan@foxmail.com