After a year of intense work, it is always with great excitement – and trepidation – that the EFA Global Monitoring Report (GMR) team waits for reactions to the latest edition. It would not be an exaggeration to say that we were overwhelmed with the feedback the report received after its launch in Addis Ababa, Ethiopia, on 29 January 2014. Achieving 2,000 media articles in around 100 countries immediately after the launch, and making it on to the headline news on the BBC, we could be pleased that the messages were reaching wide audiences.

Writing this piece for NORRAG gives me the opportunity to reflect on the purposes of the report, and what it can achieve. Written from scratch in a period of less than a year (with other time spent on graphic design, checking proofs, printing and so on), such a Report cannot hope to prepare new research. But it can – and should – present evidence from available, rigorous research in ways that provide a compelling message to policymakers that they urgently need to take action to achieve the education goals they set themselves in 2000. 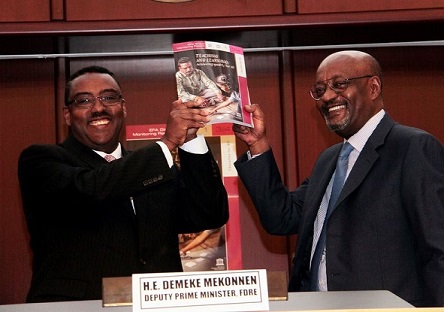 We know that policymakers rarely have time to read research published in academic journals or books (and, let’s be frank, even if they tried, some of this research is rather impenetrable!). So the job of the Report is to make the research accessible to them, in the hope that they will draw on evidence to inform their policymaking. One of the features of the Report is that it should present innovative data analysis to act as a wake-up call and alert policymakers to the need for change – such as that 250 million children are not learning the basics.

As with every edition, this year’s Report on teaching and learning involved extensive reviewing of the literature (far beyond what can be hoped to be referenced even in the 470 pages of the Report), consultations with experts and practitioners – including in this case with teachers and teacher unions. This then gets digested into messages that the Report team hopes policymakers will hear and act upon. Indeed, we have growing experience that policymakers around the world are taking notice of the report’s messages, including in countries with some of the largest numbers of children out of school and which also suffer from poor quality of education, such as Ethiopia, Nigeria and Pakistan.

The 2013/4 Report makes the case that good quality teachers are at the heart at of a good quality education system, but that the most disadvantaged children are most likely to be missing out. To correct this, the Report sets out 10 recommendations – ranging from the need to fill teacher gaps, provide teachers with adequate, relevant training before and throughout their careers, ensure balanced deployment of teachers, adopt competitive career and structures, improve teacher governance, and equip teachers with innovative curricula. These clearly-presented, evidence-based messages should provide those in the education community with ample ammunition on why teachers should be a stronger focus than presented in the High Level Panel’s report on post-2015, for example.

The GMR team is as aware as others of the long history of research on teachers that support these findings, including by contributors to this issue of NORRAG News. How can a Report hope to add to the knowledge of such experienced researchers? One way that this Report has done so is in putting the spotlight on the most disadvantaged learners, which sadly much of the research on teachers fails to do. Another is that there is a tendency of some research, in particular promoted by some of the major development agencies, to blame teachers for the failure in education, for example because they are absent from the classroom. The careful review of available evidence that is presented in the GMR makes clear that it is ultimately the responsibility of policymakers to address the problems in the system, including by setting the right incentives for teachers.

Of course, no report can expect to cover everything – nor should it attempt to do so, as this would merely dilute its messages. The focus of the 2013/4 GMR on the fact that millions of children are not learning the basics, and that these are primarily children from the poorest households, living in rural areas, and likely to include girls and children with disabilities, is a strategic one – these are the children who otherwise would not have a voice. And without the chance to learn the basics, it is extremely unlikely that they are going to benefit from other skills that education systems should offer, such as transferable skills of critical thinking and problem-solving.

Each report is more than its theme alone. At its heart is an assessment of progress towards each of the six Education For All goals. And this year’s report makes sobering reading:  none of the goals are expected to be met by 2015, some by a wide margin. The Report also shows that, if current trends are to continue, the poorest girls in sub-Saharan Africa will all be literate only by 2072.

I hope that collaboration with key partners, including those in the NORRAG network, will lead to a combined strong voice as we promote a global education framework after 2015, drawing on the evidence that each GMR has provided in its monitoring of education progress over the years.

Pauline Rose is a professor of international education at the University of Cambridge and former director of the EFA Global Monitoring Report. Email: pmr43@cam.ac.uk

This blog is based on an article in NORRAG News 50 on ‘The Global Politics of Teaching and Learning: The Real Story of Educational Cultures and Contexts’ – available free at www.norrag.org in June 2014.