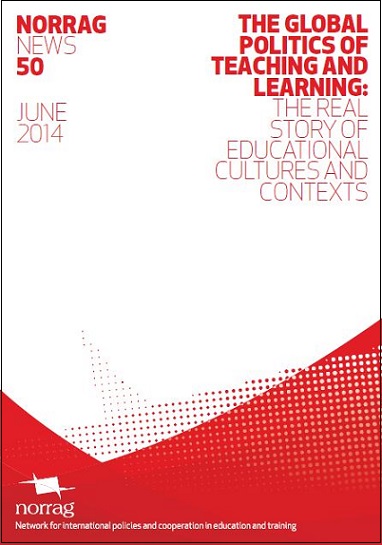 NORRAG News 50 – The Global Politics of Teaching and Learning – is now online!

Teaching children of the poor, edited by Beatrice Avalos, came out in 1986, the same year that the first issue of NORRAG News (NN) was published. This theme of teaching and of teachers is at the core of the 50th edition of NN, which is online today (access after you login/register – for free). The theme was chosen deliberately to coincide with the publication in January 2014 of the Education for All Global Monitoring Report (GMR) 2013/4 on Teaching and Learning. Over a third of the GMR is dedicated to ‘Supporting teachers to end the learning crisis’. And no less than 17 of NN50’s articles are commentaries on aspects of the GMR. But this special issue of NN50 focuses particularly on the many different ‘cultures of teaching’ and ‘cultures of schooling’ around the world.

For example, Naylor (in NN50) describes the ‘conservative culture of teaching and learning’ in Tanzania. An international language of instruction is a particularly visible  challenge in Sub-Saharan Africa where Trudell (in NN50) argues that: ‘hundreds of thousands of these African teachers suffer a serious pedagogical handicap: those whose classroom language practices prevent real communication and real learning on the part of their pupils, because the language of instruction is not understood by the children.’

What several contributors to NN50 appear to have identified are different versions of a teaching reality that is far removed from the participatory methods that teachers may have learnt about at college.

These harsh realities of teaching and learning are laid bare in many NN50 contributions – from Southern Sudan and Uganda to South Africa, and from Malaysia to Central America. Amin and Dhunpath (in NN50) capture the ‘deficit discourse’ against which teachers’ work is analysed’ but they also make the case for mapping the landscape of ‘exceptionality’. Not to romanticize and glorify this but, in a very powerful phrase: ‘to turn the pervasive pedagogy of despair to a pedagogy of possibility.’

The need for good news

The last few years with their global focus on education post-2015 and review of Education for All (EFA) have emphasized the failure of learning. In this regard, the first sentence is one of the most memorable of the GMR 2013/4: ‘…it is clear that, despite advance over the past decade, not a single goal will be achieved globally by 2015’. ‘Learning crisis’, we have noted, is one of its most common refrains. Hawker (in NN50) comments that the GMR ‘paints a rather gloomy picture of the current state of the teaching workforce in many countries …’ This is why it is essential, in Guzman’s words, to have the ‘good news’ as well as the bad. We can celebrate, with Ameen (in NN50) the extraordinary achievements of girl students, and their teachers, in Oman, but worry over the massive underachievement of boys, at all levels.

Of course there are some bad apples in the teacher crate, but Sawamura (in NN50) concludes there are ‘so many teachers who are committed to their vocation in spite of difficult circumstances, supporting their students’ learning regardless of being paid well or not.’ Heyneman (also NN50) tells a parallel story in next-door Uganda after a decade of fiscal famine in the 1970s: ‘Books were gone; copy machines broken; desks had succumbed to weather and insects. What had not disappeared were the teachers. There they were, day after day. What they lacked in materials, they made up with additional time, memory and diligence.’

One of the problems with the GMRs and with many other ‘global’ reports is that the UN’s 2015 time line is assumed to be universally applicable. How many times have we read: ‘With the deadline for the EFA goals less than two years away…’? But this is not the timing of national education reform processes, including for teachers. In Malaysia, what Fernandez-Chung (in NN50) terms ‘race-based meritocracy’ as opposed to true meritocracy goes back more than forty years to 1971 and the New Economic Policy. Li (in NN50) points out that China’s concern with promoting open education is a thirty-five year commitment. Avalos-Bevan takes a twenty-year perspective on this GMR 2013/4; and Hattie’s massive review of learning achievement, Visible learning (see Mason in NN50) itself took fifteen years, and claimed to have identified the key factors (many of them teacher-related) that appeared to enhance learning more effectively. Lastly, McGinn’s review of his fifty years’ experience in ‘planning’ would acknowledge that ‘We ignored the wide cultural and economic differences that exist between countries (and even wider differences between individuals). Our objective was not to learn what would work best in another context–the intent was to transfer knowledge, not to acquire it’ (in NN50).

Hence, the deadline for countries considering the recommendations and strategies from the GMR 2013/4 cannot be only 17 months away in September 2015.

Our last dichotomy relates to the ‘learning crisis’ – a term which we have already noted is used throughout the GMR 2013/4 (almost 120 times!). It is perhaps interesting that ‘teaching crisis’ is not used at all in the whole volume. But this does produce something of dichotomy between the iconic figure (of 250 million) attached to the learning crisis and the acknowledgement that the majority of these non-learners are actually in school, and many others of them have had a few years of school exposure:

Of the world’s 650 million primary school age children, at least 250 million are not learning the basics in reading and mathematics. Of these, almost 120 million have little or no experience of primary school, having not even reached grade 4. The remaining 130 million are in primary school but have not achieved the minimum benchmarks for learning. (UNESCO, 2014: 18).

Many of them are said to be from disadvantaged backgrounds. But we learn very little about their experience of school, or of teaching.  We end up therefore with a very dramatic figure about children not learning, but this is almost entirely disconnected from what we learn about any teaching they may or may not have had. McLean (in NN50) puts his finger on precisely this disconnect or dichotomy in which what we hear about learning (and often about non-learning) is in quite a separate silo from teaching:

So it is strange, 30 years on, to witness a global debate on the post-2015 education goal in which there is a tendency to talk about learning as if it were disconnected from teaching, detached from teachers, different from education and somehow recently discovered. How did we get here and what is going on?

We have only referred briefly in these few pages to less than a quarter of the more than fifty contributors to this special anniversary issue of NORRAG News (NN50).

This is the first issue of NN that will appear in French, Spanish, Arabic and Mandarin, over the next several months.