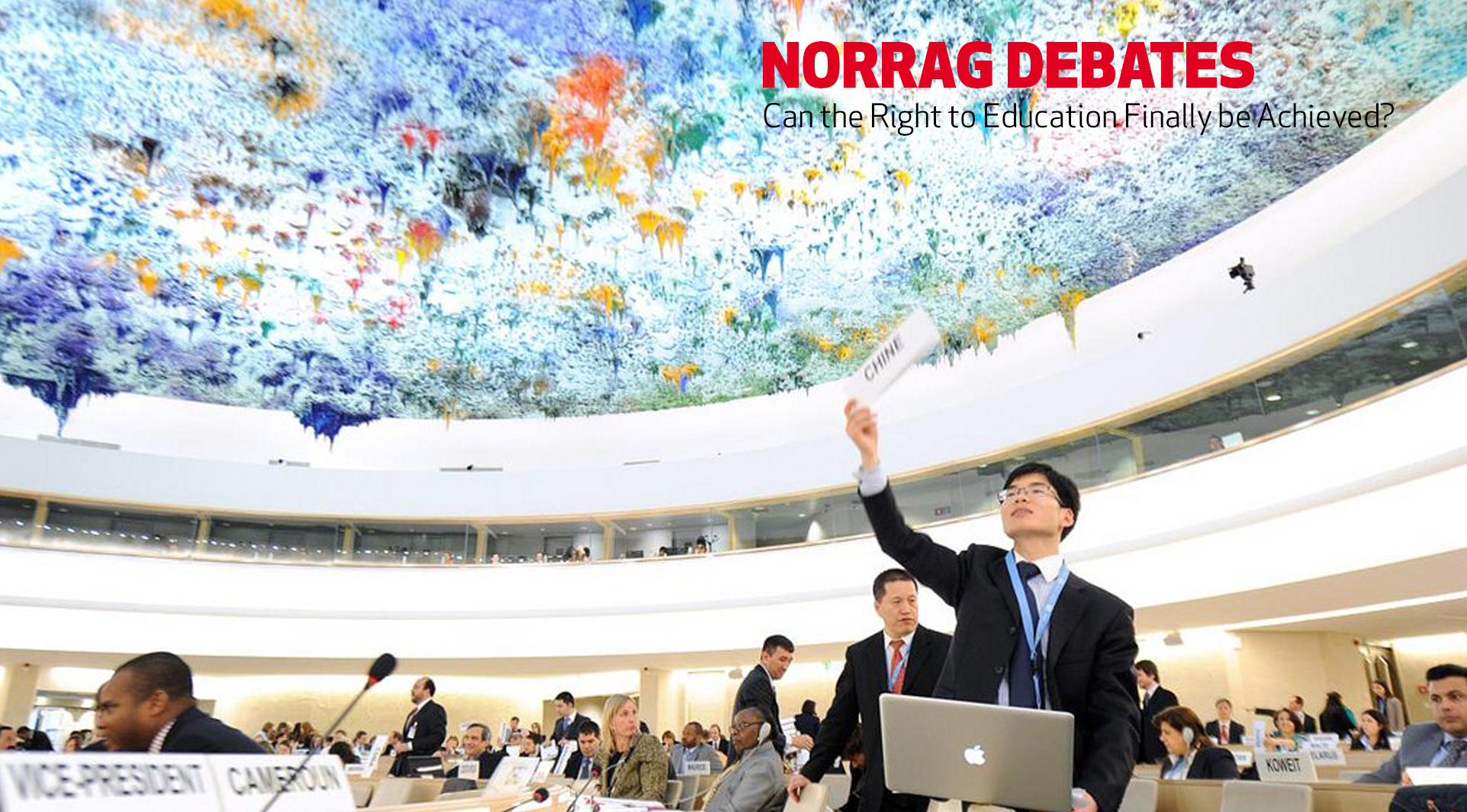 As part of the NORRAG Debates stream, NORRAG is starting a series of blog posts by bringing to the fore questions surrounding the realization of the right to education (RTE). As the global education community makes progress towards the realization of SDG 4 – Education 2030 agenda, questions related to ensuring the RTE of all children are re-emerging. Consequently the tension is building between fast and measurable progress and country-specific and qualitative progress towards the SDG vision. For example – What can be done when governments lack the resources or the political will to focus on the RTE? How do emerging trends potentially affect RTE? Can we measure progress towards fulfilling RTE for all? NORRAG Special Issue 01 will also focus on bringing to light some of these issues, notably by looking in detail at the progress made towards realizing the RTE in India, South Africa and Brazil as well as highlighting the situation for conflict-affected children. These are just some of the questions and issues NORRAG aims to bring to the fore as it opens this latest debate.

RTE – An answer to contemporary challenges?

Human rights and the RTE have gained renewed importance in recent years. Social and economic developments such as growing inequalities, protracted conflict, the refugee crisis, extremism feeding off despair and poverty, poor educational progress for vulnerable groups and aggressive privatization have revived the global call for action to counter political, societal and economic trends that are jeopardizing social progress. Indeed, the vision and values of human rights and the RTE are seen as potent tools for confronting the forces behind inequity and polarization in society. Yet, the RTE is still a loosely defined imperative. Agreeing on a way to harmonize universal moral and legal rights with national and local values, whilst overcoming barriers to policy implementation and simultaneously developing an agenda that is both process and results driven is clearly a considerable challenge.

How do global mechanisms contribute and what are their weaknesses?

Resolutions on the RTE are regularly adopted by the United Nations Human Rights Council (HRC) in Geneva. The HRC is one of several explicit and implicit international mechanisms contributing to the fulfillment of the RTE. It works with numerous institutions and stakeholders to promote specific issues ratified in international treaties and conventions representing the highest formal form of support to the RTE out with the treaties and conventions themselves. Despite this, it is important to note, that their resolutions are not legally binding, but rather reflect the political expression of the HRC’s members, on specific human rights issues.

Since the adoption of the Universal Declaration of Human Rights there have been at least seven international treaties dealing with the RTE. While the vast majority of governments have ratified at least one of these instruments, accelerated global progress towards universal primary education only built up momentum at the start of the current century with the onset of the Education for All and Millennium Development Goals agendas and after a period of sustained economic growth. Therefore, if one considers education progress over time it becomes apparent that dedicated UN bodies acting within an international legal framework might not be the most effective way to achieve the RTE.

The global education agenda, currently framed by Sustainable Development Goal 4, can be seen as another steering mechanism to realize the RTE. Its scope is comprehensive and at times even exceeds legal provisions. It includes early childhood care and lays out a detailed vision of what is understood by education. The agenda also sets target dates for achieving this vision, making it more time-sensitive and concrete in comparison to the unbounded human rights agenda. That being said, there is a danger that continued focus on national performance might steer education process reforms towards national averages and percentages at the expense of individual experience.

Fundamentally, the RTE carries both moral and legal rationales, which can be difficult to untangle. Legally entities can enforce the RTE within a transparent and agreed upon framework and definition while morally the RTE must be aligned with the same ethical precepts as those related to the right to health, freedom, justice and peace. However, as the responsibility of progressively taking steps towards achieving the RTE, falls primarily on national governments, the way international legal and moral frameworks are implemented are interpreted and acted upon according to the national context. The road to realizing the RTE is thus fraught with difficulties and having the RTE enshrined in national law does not necessarily always translate into adequate policies and resources. Indeed, whilst most countries have provisions to protect the RTE at the national level, current evidence suggests there is still a long way to go, with some 264 million children and youth still out of school, making visible a clear policy gap.

However, this figure, also raises the question of whether monitoring progress (or lack thereof) towards realizing the RTE should be as simple as counting children in school. For example, it should also include qualitative monitoring concerning adherence to international instruments, and creation at national level of relevant policy tools. But that makes the task of monitoring RTE an even more complex endeavor. Indeed, when reviewing the indexes currently presented, it is clear that we should be cautious in drawing conclusions that perhaps we need to review their methodologies and data sources. By some indexes, for instance, the U.S. does less to realize the RTE than Ethiopia, Indonesia and Nigeria, and just slightly better than D.R.C. It is clear therefore, that whilst results may be somewhat lacking in certain countries in terms of their legal commitment to get ‘bums on seats’, individual country efforts to realize the RTE cannot necessarily be measured by such a quantitative yardstick.

NORRAG’S Vision – the realization of an undefined imperative through debate

The SDG 4 – Education 2030 agenda emphasizes equity and inclusion. Yet evolving global conceptions of the RTE lead to difficulties in fostering what is at the moral and philosophical root of RTE – namely, a fair and equal chance for each individual to pursue their aspirations throughout life, including and based on educational opportunity.

NORRAG seeks to contribute to advancing the RTE agenda through mobilizing the voices of all stakeholders in an effort to help shape the debate. It provides a space for education researchers, practitioners and other stakeholders to express their views and respond to the difficult questions raised above. International organizations, civil society, researchers and practitioners bring a wide range of perspectives to the table which have the potential to advance the realization of the RTE, explicitly or implicitly, in numerous points of debate and contention which deserve attention.

NORRAG members are thus invited to contribute to the discussion by submitting a blog or highlighting recent work that contributes to a global vision which supports the realization of the RTE.