Violent cities: the ghettoes of our world? 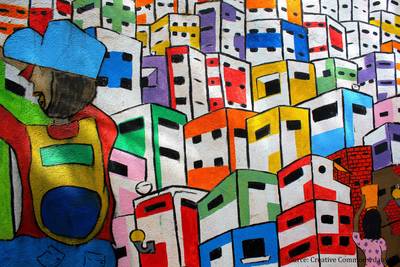 The world is less peaceful today than it was in 2008, is indicated by the results of the 2015 Global Peace Index. Regardless of the global, regional and local investments in humanitarian relief, peacekeeping missions and development aid, the world sees growing numbers of refugees and internally displaced persons (IDPs), increasing numbers of deaths from internal conflicts and devastating impacts of various forms of violence in cities around the globe. The nature of conflict and violence has also changed drastically over the past decades, with conflict becoming more localised and more violent deaths occurring in so-called non-conflict areas.

With the Sustainable Development Goals (SDGs) – and specifically SDG 16 on “peaceful and inclusive societies” – there is a common consideration for an urgent need to address the cycles of conflict and violence by addressing the tools used to commit such acts, and strengthening political institutions aimed at dealing with them. Echoing this sense of urgency, the Dutch Minister for Foreign Trade and Development Cooperation Lilianne Ploumen recently remarked in The Guardian how with the SDGs “the world has turned the mutual importance of peace and development into an agenda for action”. Disputing the idea that such a combined focus would give too much weight to “security” in the context of development work, Ploumen claims that: “bringing a development perspective to issues of conflict prevention and peace will allow us to focus better, and earlier, on emerging conflict and instability. […] Let’s show that we are serious about leaving no one behind. We cannot allow fragile and conflict-affected areas to become the ghettoes of our world.”

But who is living in these so-called “ghettoes of our world”? According to UN Habitat, the majority of the world’s population is currently living in urban centres, while simultaneously the world’s population is becoming younger than at any other point in history. This transition is however skewed: of the estimated 3.1 billion people that are under the age of 25, the majority (nearly 2.7 billion) are living in the rapidly growing cities of Latin America, Africa, and Asia.

At the same time, UNESCO’s 2012 Global Monitoring Report claims how a disproportionate proportion of youth are not found in the better-off neighbourhoods of the emerging metropolises, but live in the impoverished, unplanned, and often highly violent urban settlements (referred to as slums, favelas, or “ghettoes”). Here, disadvantaged (i.e. unemployed and un- or under-educated) urban youth are more likely to be both victims and perpetrators of urban violence.

Some nuance is indispensable here though: rather than simply equating cities with violence, urban violence manifests itself in many forms and needs to be seen as part of a continuum, one that goes from anomic violence (crime and delinquency) to urban warfare or insurgency (see for instance an interview with Dennis Rodgers, 2010, or the recent work of Carapic, 2015).

Youth can be considered as (both passive and active) protagonists in the story of contemporary forms of armed conflict and urban violence. In addition, specifically with regard to conflict-affected contexts, such as Burundi, youth-related issues are moving into the spotlight for policy-makers, practitioners and scholars alike.

They all see a growing recognition and concern for, on the one hand, the challenges of a large, often under-educated and un(der)-employed and potentially ‘frustrated’ youth cohort in a demographic sense in conflict settings (see for instance Muggah in his TED talk of 2014), and, on the other hand, the potential of youth movement and ‘agency’ for peace, as was shown through the recent adoption of the UN Resolution 2250 on Youth, Peace and Security.

However, the presence of a large youth population in cities – and its propensity to form gangs – does not fully explain the complex dynamics of violence in urban settings. Specifically, this observation obscures the effect of socio-economic and political exclusion, the lack of educational and training opportunities, and for the most part the lack of substantial policy efforts to generate an educated and trained young population capable of obtaining employment (if jobs are available at all) and fostering generative civic engagement. All of these are crucial factors for understanding the link between youth and violence and (a lack of) social services and educational opportunities.

What education has got to do with it?

Briefly returning to Minister Ploumen’s call not to “leave no one behind” and let “fragile and conflict-affected areas become the ghettoes of our world”, research conducted as part of UNICEFs PBEA programme points with increasing certainty to the crucial and not-to-be-neglected role of social services – and particularly the role of education – in supporting SDG 16 of peaceful and inclusive societies.

In other words, SDG 16 – on peaceful and inclusive societies for sustainable development – can only be reached in close connection to and in collaboration with other SDGs, including (yet not limited to) those related to good health and well-being (#3), education (#4), gender equality (#5), employment and decent work for all (#8) and inclusive, safe and sustainable cities (#11).

In reflecting on how to overcome fragility and conflict around the globe, the World Bank Group’s president publicly mentioned how business as usual does not seem to deliver: “We now have to admit that the paradigms and frameworks that have guided our perspective on fragility and conflict may be less relevant than we had hoped.” Raising questions about the current approaches to human security and peace building are helpful, considering that dominant ways of thinking have largely been driven by a securitisation and good governance agenda (also called a liberal peace building thesis).

By under-valuing the role of social sectors to rebuild and transform sustainable and inclusive societies, these dominant approaches merely support negative rather than positive peace.

Recent research by The Research Consortium on Education and Peace building argues how in order to work towards positive peace, the root causes of insecurity, inequality and conflict need to be addressed, and that education governance, policy and practices can either make or break sustainable forms of peace building. The quality and availability of education can act as a mechanism for mitigating or sometimes fostering violence and conflict (and vice versa). Education in this sense can be a double-edged sword.

To date, there is little guidance (or evidence) on the kinds of formal and non-formal educational strategies national and metropolitan governments, school boards, youth movements and other civil society organisations and communities can (or should) develop and implement in order to respond to urban violence, by including various forms of education and training as part of a broader urban violence mitigation strategy.

NORRAG has conducted some seminal work in 2014 in the frame of the collaborative project on Educational Strategies for Dealing with Urban Violence that was launched in partnership with the American Institutes for Research (Washington D.C.) and Igarapé Institute (Rio de Janeiro). This project mapped education interventions – both formal and non-formal – to prevent and reduce violence in Brazil and South Africa. Its positive results enabled to put the topic of educational strategies for dealing with urban violence prominently on the international agenda and to contribute to fill a knowledge gap.

What is becoming clear is that education should not simply be about fostering human capital. If education’s role is to be taken seriously within the process of urbanization and societal transformation, we need to move beyond the simplistic view of education as only fostering ‘productive’ citizens and societies. While education carries the potential to break through patterns of class, gender, ethnic and other forms of marginalisation, we should also recognise the possible negative effects of education. Specifically, in combination with uneven urbanization, education – whether available or not – can lead to an increased sense of social exclusion among the urban youth, which, in turn, can foster violence in the city. Hence, while life in cities can increase proximity and access to education, there is a need to better take into consideration the possible negative effects of urbanization as well: the rapid influx of population leads to a shortage of (state-funded) schools and well-trained teachers and other educational staff; the expansion of cities leads to a strain on public institutions, as well as a fragmentation of urban space and ‘educational’ authority; and finally the undermining of more indigenous notions of education, which often involve or are derived from rural or indigenous forms of learning (see for instance the study of Qian and Anlei, 2014; or the work of Rodgers on Nicaragua, 2014).

These insights call for a more nuanced understanding of the complex realities of violence and conflict-affected urban areas, and how future generations can be better served and supported through meaningful, equitable and relevant educational opportunities. We argue how an expansive rather than narrow methodological ‘post-disciplinary’ framing is essential to explore these relationships between formal and non-formal educational processes, various forms of urban violence and the potential of youth agency in relation to peace (for more details and arguments, see the full NORRAG working paper of Carapic and Lopes Cardozo, 2016).

Peace building in the city – starting with youth

Mainstream peace building efforts rarely take into account urban politics and the inclusion of social sectors, and rather focus on establishing stable markets and security systems. Yet in a world where violence and conflict are increasingly taking place in urban centres, peace building efforts need to be rescaled to the city level in order to address the root causes that drive civic conflict. Considering the relative youthful majority of many of the more “violent” cities, there is an urgent need to address one of the root causes of exclusion, marginalisation and frustration: a lack of access to relevant and meaningful forms of education.

In addition, if civic conflict becomes the violent expression of grievances regarding the distribution of power and resources in the urban environment, then the primary aim of peace building in the city is to foster (non-violent) generative civic engagement or what Davies (2004) would call ‘positive (non-violent) conflict’ – i.e. to transform power relations in the urban environment by encouraging the wider socio-economic and political change that is demanded by younger (and older) generations. In other words, the work of Björkdahl (2013) shows how strategies to build peace need to be implemented in the political, social and physical space where civic conflict actually takes place and where the most pressing potential for building peace rests: the city. As argued by the Research Consortium on Education and Peace building (see Novelli, Lopes Cardozo & Smith, 2015), sustainable approaches to peace building need to be inclusive of education and other social sectors in order to better support young people in building more sustainable and peaceful lives. We cannot afford a collective neglect and lack of political support to ensure more equitable, relevant and supportive systems of education for youth – especially in what some have termed the ghettoes of our world – if we are serious about creating more peaceful futures.

>> View all NORRAG Blogs on violence, conflict and Agenda 2030.