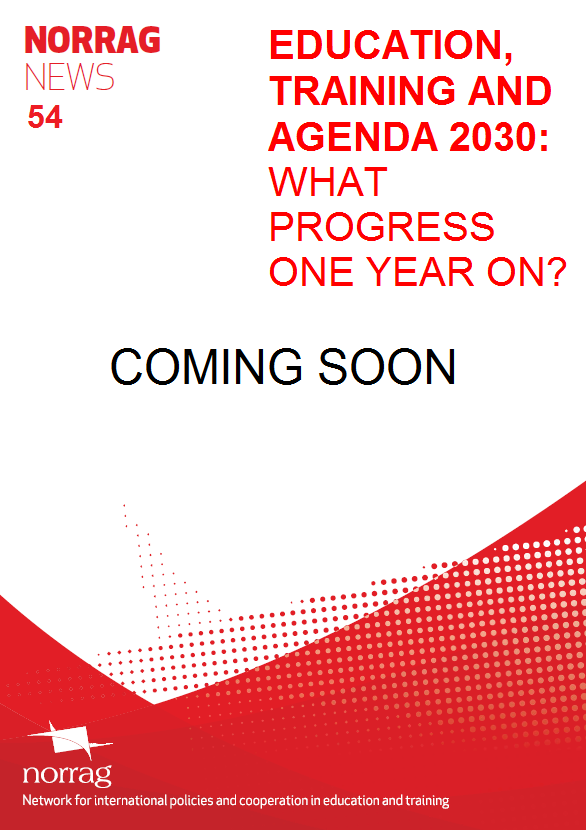 What has actually transpired globally, regionally and nationally since the education and other Sustainable Development Goals (SDGs) were confirmed in the UN General Assembly just over a year ago in September 2015?  Following the goal and target agreement for 2030, the question immediately became: ‘What next?’ How would these new targets be achieved? How would they be measured, and which indicators would be used? How would they be financed? Since the SDGs are aspirational global goals, a key issue became if, and how, they would be translated into national and international policies around the globe over the coming years.

The formal governance and follow-up mechanisms are now in place, including the SDG 4-Education 2030 Steering Committee, and indicator frameworks are being developed and finalized. The UNESCO Institute for Statistics (UIS) is playing a crucial role. Meanwhile, the Global Education Monitoring Report 2016 has already started its annual reporting role on monitoring education in and across the SDGs.

There are a series of very major issues around implementing and monitoring raised by the world’s new development agenda, and particularly its education and training dimensions. Here are some of them, which the forthcoming issue of NORRAG NEWS (NN), NN54, will address:

For the UN family, and especially the bodies concerned with education, training and capacity building: The SDG agenda is absolutely central to the UN’s raison d’être and will be a core concern of many of its specialist agencies, including in education. Is the same true for other multi-lateral agencies and multi-stakeholder bodies?

For more developed, emerging and less developed economies: There is an ongoing discussion about the universality of the world’s SDG agenda. What is the evidence that the world’s largest economies are taking account of the SDG 4 agenda for their own ministries of education which is the intention of the UN’s 2015 document on Transforming our world?

‘These are universal goals and targets which involve the entire world, developed and developing countries alike’ (UN, 2015: 3).

For donor countries themselves as well as their development agencies:  For most of the OECD countries as well as a substantial number of non-DAC donors, there may be two sides to the SDG agenda in education. On the one hand, is the agenda perceived to be applicable to their own development cooperation agencies?  On the other, is it seen to have direct implications for their own national ministries of education?  In some of the earlier consultations about the post-2015 agenda, it was clear that some spokespeople from OECD countries saw the debates as targeted at the South and not at their own countries. (How) has this changed?

For non-state actors, both for profit and non-profit:  Many non-state actors played a crucial role in determining aspects of the SDG agenda. But to what extent has the agenda re-shaped the programmes and policies of this very diverse group?

If SDG 4 Education 2030 covers all of education – are there no more priorities?  Given that SDG 4 on Education covers all levels of education and a great deal more in its ten targets, it may not be too difficult to argue that the education programmes of most agencies, NGOs and education ministries are already engaged with the SDGs in some manner. In the brave new world of the SDG 4 and its targets, is there is no longer a key focus area?

The return of technical and vocational education and training (TVET) to the world’s agenda? TVET was not really captured at all in the EFA Dakar Goals, but is now very clearly present in several of the SDG 4 targets. How will this affect support for TVET nationally and internationally?

From Education for All to Education for all other SDGs? A case has been made that education is not just about SDG 4, but is relevant to all the other 16 SDGs. This massively raises the aspirations, ambitions and challenges for education monitoring.

Will the SDG indicators determine the character and pattern of implementation?  The broad ambitions of the SDGs and their targets may be sharply narrowed by the scope of the indicators. Will it be the lens of the 11 so-called ‘global indicators’ that will shape the monitoring of the 10 education targets rather than the 30+ ‘thematic indicators’?  Especially as it is the data from the global indicators that will be fed into the UN’s SDG Annual Report. Will the indicator tail wag the SDG dog?

The next issue of NORRAG NEWS, NN54, on “Education, Training and Agenda 2030: What Progress One Year On?” is expected to be released in early January 2017.