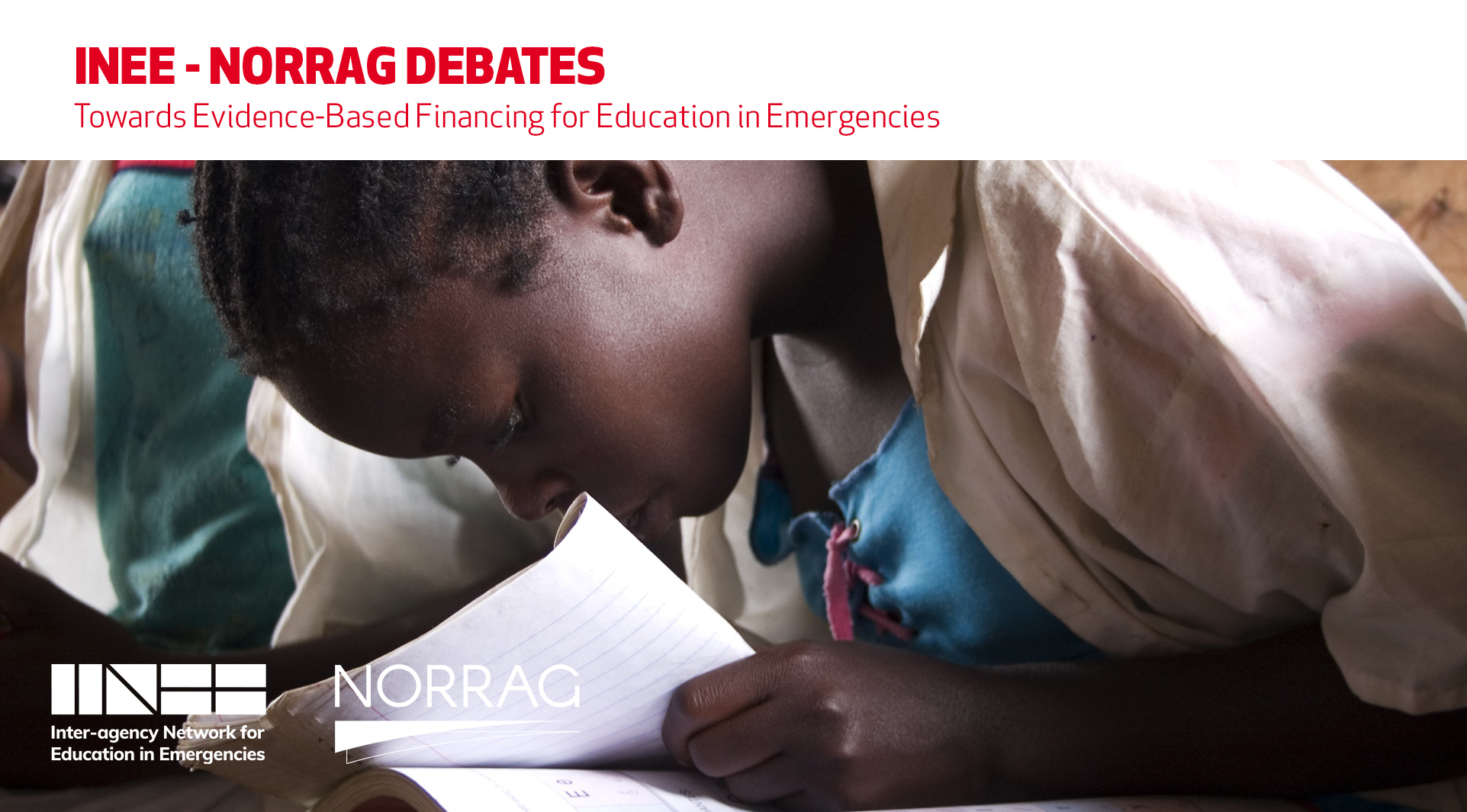 A blog series by NORRAG and INEE

This post introduces a new blog series by NORRAG and INEE to promote discussion of and explore the linkages between financing and evidence for education in emergencies (EiE). The strikingly low share of international humanitarian funding allocated to education is not sufficient to support the unprecedented need of children in crisis contexts. As the average length of displacement increasingly exceeds the duration of a typical basic education cycle, business-as-usual approaches to EiE and funding have shown their limits. How do we ensure sufficient funding for EiE? Can we identify what works in EiE and develop an evidence-based approach to funding it? This blog series will invite EiE experts to engage with relevant questions on intersections between increasing EiE financing and strengthening the EiE evidence base.

Blog posts in the series:

Review and Response to Rich, Timely Data: A Key to Success for The Pakistan Reading Project by Kimberly Smith (27 November 2019)

We Need More and Better Data on Education: 38 Organizations Issue a Collective Call to Fund Education Data that Will Allow the World to Reach Sustainable Development Goal 4 by UNESCO Institute for Statistics (3 July 2019)

Time to act: Calculating & securing the finances to fund education for the world’s refugees by Emma Wagner (19 July 2018)

Staggering needs, yet dearth of funding

According to UNHCR, nearly 20 people are forcibly displaced around the world every minute, as a result of conflict or persecution. A staggering 65.6 million people are forcibly displaced worldwide, including 22.5 million refugees and 10 million stateless people. Nearly half of the refugees are children below 18 years of age. Overall, it is estimated that more than 75 million children are in dire need of educational support in crisis-affected contexts, including hundreds of thousands of children whose education has been disrupted by natural disasters. In 2016, ODI estimated that there is an estimated global finance gap of at least $8.5 billion per year needed to support these 75 million children in crisis affected contexts. This is a mere $113 per child, yet the sector remains chronically underfunded. Current levels and modes of financing education in emergencies are insufficient to meet the needs of these children.

Conflict-affected countries, on average, spend around 3% of their national income on education – below the global average of 4% and well below the recommended target of nearly 6%. These countries are home to 50% of the world’s out-of-school children and adolescents. Investing in education should be a priority for these governments as well as external donors. Yet only about 2% of international humanitarian funding goes to education. By 2030 there will be roughly 1.6 billion young people in the world. Without new ways of working, over half of these youth will be unable to access opportunity through education.

The EiE sector has not been afforded the resources to generate robust evidence, undermining the development of effective and efficient interventions

Education lags behind other sectors in evidence production. However, evidence-based programming and planning is vital in EiE precisely because funding is limited. Practitioners and donors alike must ensure that the little funding available supports interventions that are grounded in an understanding of what works in EiE.

Evidence is also of paramount importance for governments to ensure that education sector plans and transitional education plans are built on robust data. Better data and evidence on the educational needs of children in emergency situations, and informed strategies to address these needs, are a missing building block for all stakeholders and a requirement for effective action, improved accountability, and efficiency gains. Studies have shown that the lack of data and evidence denies millions of children their right to an education. Literature reviews of the EiE evidence base have highlighted the need for a better knowledge mapping of evidences on EiE and critical gaps in identifying “what works” for supporting educational access, quality of learning, and wellbeing of children in EiE situations.

Better data and evidence for better funding to EiE

There is a reciprocal, and vicious, relationship between insufficient funding and limited data and evidence which jeopardizes success in mitigating the devastating effects of conflict and natural disasters on education. Limited data and evidence decrease the chance of funding, and constrained funding in the sector means less money is put toward collecting, analyzing, and utilizing data. The EiE sector has been unable to break this cycle. Innovative approaches need to be developed to accommodate emergency and evidence-based action. This requires increased and flexible education financing in emergencies, specifically targeting the generation and dissemination of evidence. Ultimately, such initiatives will contribute to more efficient use of resources and signal to donors that EiE programming is a dependable investment.

NORRAG and INEE seek to contribute to advancing this agenda by engaging their respective members to think critically about EiE financing and evidence, to bring many voices to the table, and to share their expertise.

This blog series, which will run throughout 2018, hopes to foster dialogue around questions such as:

These are just a few of the questions NORRAG and INEE aim to highlight in this series. We welcome your voices and look forward to engaging in this important dialogue.

NORRAG is a global membership-based network of international policies and cooperation in education, established in 1986. NORRAG’s core mandate and strength is to produce, disseminate and broker critical knowledge and to build capacity among the wide range of stakeholders who constitute its network. NORRAG contributes to enhancing the conditions for participatory, informed, and evidence-based policy decisions that improve equity and quality of education. Learn more at www.norrag.org

Disclaimer: Both NORRAG and INEE offer spaces for dialogue about issues, research, and opinion on education and development. The views and factual claims made in the posts in this joint NORRAG-INEE blog series are the responsibility of their authors and are not necessarily representative of NORRAG’s or INEE’s opinions, policy, or activities.