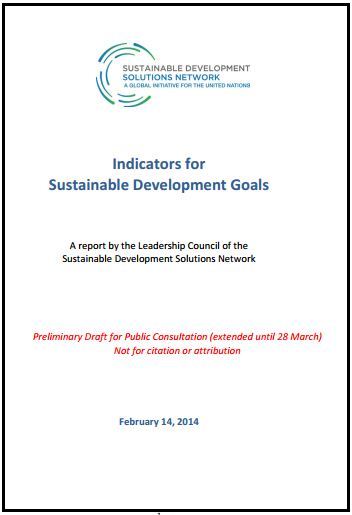 On 14th February the Sustainable Development Solutions Network (SDSN) released a draft report for public consultation on proposed indicators for Sustainable Development Goals (SDGs). We asked several NORRAG members to comment on how livelihoods and skills training were treated in these proposed indicators: here is a summary of what they said (see the embedded links for their full comments).

The NEET indicator isn’t neat, and not a nice fit for the informal economy

One of the potential core indicators proposed by the SDSN was to measure the: ‘Percentage of young people not in education, training, or employment’.

Pieck calls for more clarity on what the NEET indicator is actually referring to. When trying to assess the indicator known as NEET, we are obliged to reflect upon the diversity behind each term (‘education’, ‘training’, ‘employment’). For example, in Mexico women are the majority within NEET, they are often devoted to housework and that does not show in statistics.

de Moura Castro, King and Mehrotra all have a problem with the way the informal economy is treated as part of this indicator. The SDSN comment that the NEET indicator ‘is a measure of the proportion of youth who are either unemployed, work in the informal sector, or have other forms of precarious jobs’.

Mehrotra adds that, since the indicator (and the term ‘informal sector’) will mean different things for different countries, there needs to be a simple and consistent definition for ‘informal’ employment built into the rationale.

It is hard to accept that the NEET indicator is ‘preferable to standard unemployment measures and is better adapted to low-income and lower middle-income countries’, as the SDSN notes. King notes that the 2012 UNESCO Education For All Global Monitoring Report highlights the great difficulties in comparing youth unemployment rates between OECD countries and those in low-income countries. The key difference is that in countries which don’t have any unemployment benefit, there is no option except to work.

Technical and vocational skills needs its own indicator

As de Moura Castro notes, currently the major proposed indicator of training activities (the NEET indicator) appears as something that youth may be doing, instead of being unemployed or in the informal sector. Training should be treated as a stand-alone and legitimate complement to academic education and given more attention. As it stands, it is almost an after-thought, without a life of its own. It is merely something people do, instead of being idle.

Vardigans adds that critical references to ‘skills development’ and ‘adults’ have been omitted. He proposes that a clear technical and vocational skills indicator be included, for example, stating the % of youth having at least notional Level 2-3 education and/or TVET skills certification.

Agricultural education and training gets sidelined in the indicators

If the SDSN proposed Goal 6 (‘Improve Agriculture Systems and Raise Rural Prosperity’) does become reality, Menefee notes that there will be implications for education and skills, both at the higher education and training level, and with regard to farmer education skills training. The SDSN Goal 6, has a proposed indicator to measure the ‘share of farmers covered by agricultural extension or equivalent programs’. It would be useful also to measure the level of R&D in agriculture, as well as the tertiary level enrolment in agriculture-related courses.

One of the ‘additional indicators that countries may consider’ was the ‘proportion of adolescents (15-19 years) with access to school-to-work programs’. However, de Moura Castro questions the usefulness of this indicator:

‘Suppose that the entire country has 10 vacancies for training – in whatever. Suppose all youth are offered a place and all of them refuse to take it. According to the indicator, 100% of youth have been offered school-to-work programs. Perfection!’

Furthermore, he questions how it will be possible to disconnect the school-to-work programs from regular education.

Vardigans wonders why ‘decent work’ appears in the proposed target 02a of SDSN Goal 3 (‘Achieve Development within Planetary Boundaries’), which states that ‘Each country reaches at least the next income level and promotes decent work’. He notes that the term decent work seems to be added as an afterthought and does not seem to fit with the goal statement. ‘Decent Work’ is a very specific and well-defined ILO term which captures some extremely important issues relating to employment/ livelihood. He suggests that the key reference to Decent Work should first appear under Goal 03 (Ensure Effective Learning for All Children and Youth for Life and Livelihood), linked to target 03c (Ensure that all youth transition effectively into the labor market). He notes that there should be a Decent Work indicator, perhaps managed by ILO under the Decent Work Agenda, could then disaggregate those in employment and decent employment.

If we are really serious about Target 3c (‘Ensure that all youth transition effectively into the labour market’), Mehrotra notes, then the fact is that the Labour Force Participation Rate of women, and of young girls especially, must be monitored carefully.

What do you think of the proposed SDSN indicators related to work, education and skills?

The SDSN public consultation period on Indicators for Sustainable Development Goals has just been extended to March 28th, 2014 (from 14th March). Make use of it, send in your comments directly to the SDSN, or if you prefer not to submit an official comment, feel free to add your thoughts below this post.