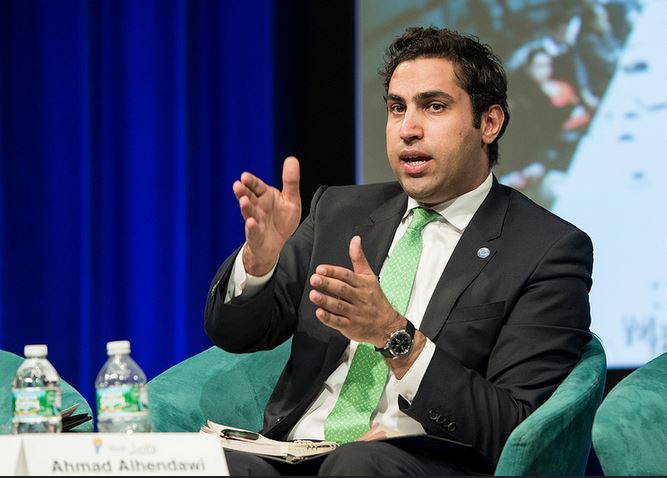 The voice of youth?: Ahmad Alhendawi, the UN Secretary-General’s Envoy on Youth

At sixteen, I attended a National Student Leadership Conference in Washington, D.C. Arriving at the program, I was skeptical. How could anyone teach leadership? Over the course of 10 days, I embarked on what was one of the most challenging journeys of my life. I began with grappling with basic principles of self-awareness and questions centered around: “Who was I?” “What did I have to offer?” “If the world did not use my academic achievements as a criteria for my competence, would I consider myself competent?” “What is self-empowerment?”

As if these questions weren’t maddening enough, I was then tasked to create action plans for my vision of helping communities succeed. To not only think about what I could do to help my community, but to implement my plan strategically. I was charged to act. After eventually organizing student volunteers to help a local farmer meet his annual quota of corn harvest for the year, I left the program invigorated. Years later, after receiving my Masters in International Education Development, I find myself watching debates around the post-2015 agenda and asking again, “What do I have to offer?” (as a self-described member of the youth demographic) and “What can I do?.”

The aim of this post is simply a think piece directed towards policy makers, foundation leaders, civil society members and corporation heads. My question is how can we, with respect to education initiatives, think more broadly about incorporating youth engagement in our policy endeavors in the post-2015 debates? Moreover, can we maximize partnerships with youth, to educate and simultaneously encourage these future economic, social leaders to act towards resolving key development issues?

National and international bodies are taking significant steps to engage as well as understand the scope of youth contribution. The Global Education First Initiative (GEFI), for example, has set a precedent among the international community to refine the commitments made to realize equitable and quality based systems of education for children globally. With reference to youth, GEFI makes notable efforts in partnering with youth advocacy groups internationally to gauge their perspectives on relevant development initiatives. To this end, it was personally interesting when looking at youth (ages 16-30) responses in South Asia, to see that the top two preferred intervention areas seem to be 1) a good education and 2) an honest and responsive government. Mainly because education is vital in developing key temperaments for sustainable development and responsive partnerships with governments (and in general) seem like logical levers for substantial social change. It is encouraging that youth are independently identifying these areas.

In parallel, the United Nations Secretary General, Ban-Ki-Moon, has illustrated his commitment to youth by recently appointing a United Nations Envoy for Youth, Ahmad Alhendawi. Mr. Alhendawi, at 29 years of age is the youngest envoy in the history of the Organization. This move was unprecedented.

On national levels, there are also significant strides being taken to incorporate youth engagement. Taking India as a case study in South Asia, according to the National Consultation Report—Post-2015 Development Framework, according to the 2011 census, an estimated 358 million people (or approximately 30% of the population) are between the ages of 10-24. In February 2014, as part of the Development Framework’s study to understand the population more comprehensively, four NGOs conducted regional consultations with over 100 youth organizations in India. The qualitative findings showed: “The young people want to be an integral part of the process of deciding from planning to execution. Therefore the demand is for an investment with and in young people to ensure that they are able to realize their full human potential as leaders and decision makers/change agents today and tomorrow.” Recommendations from the Framework suggest multiple options from Ministry restructuring to include a more definitive division of Ministry of Youth from Sport, youth commissions, entrepraneurship workshops, media engagement, a focus on youth in fragile states, and legal aid for youth.

Additionally, Ms. Frederika Meijer, UNFPA Representative from India and Bhutan, has developed an interactive Youth of India Portal for various stakeholders in society to check in on vital statistics related to youth demographics. In general, a methodical attempt to track and assess hard data related to Indian youth is at minimum a solid start in researching youth trends.

While this is encouraging, the task of formally recognizing these youth partnerships as more then isolated endeavors or as segments to simply address mechanically remains to be seen. Undoubtedly, the factors are complex and there is genuine interest among noted professionals in thinking critically about these challenges. However, sustaining the momentum seems to be vital to future development success.

Internationally, sharing lessons learned and developing joint initiatives could be beneficial. Specifically, there is scope for foundations to partner with each other to exchange financial and intellectual resources. Partnerships between South Asian foundations and foreign companies, for example, could be productive. In essence, collaboration could generate powerful results. Domestic organizations might have the knowledge on what has worked best for their communities, why not allow those organizations to take the lead on tailoring youth specific plans? Or at a minimum, why not invite South Asian Foundations/ Entrepreneurs to the table when it comes to dialogue about future initiatives?

As noted by the earlier mentioned Indian National Consultation Report, there seems to also be untapped potential in forming partnerships domestically between civil society organizations, corporations and international bodies. Outcomes, for example, could be: entrepreneurship workshops, skills in strategic planning, or even earmarking education funding to understand how to interweave this focii into curriculum development. If agencies in the U.S., with a less numerous youth demographic, started incorporating similar initiatives on a state by state basis, the scope for sustainable development initiatives with youth could be extremely positive. To this end, it seems paramount that especially when considering the next steps of designing the post-2015 agenda, we address the need to psychologically prepare youth for development challenges through our commitments.

Further, governments can tangibly benefit by engaging in an intrinsic shift in their value system. Mainly, towards one that recognizes youth as potential architects of solutions to problems, rather than as passive constituents of society. Correspondingly, it seems logical that the subsequent government action plans should honor these commitments and incorporate youth as leaders in the quest to sustain relevant initiatives.

Nayantara Naik is a recent M.A. Graduate from Teachers College, Columbia University. Her M.A. focused on International Education Development, Human Rights and Public Policy. She is currently working on a research team for the Global Partnerships Forum’s book project and is an independent International Education Consultant currently located in New York. Email: nayantara.naik@gmail.com