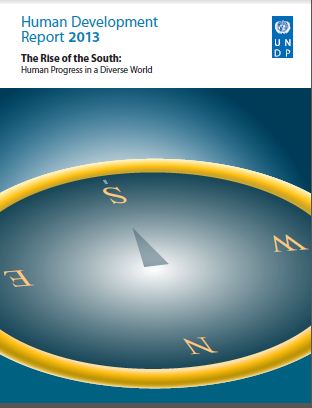 I always read the UNDP Human Development Reports with interest, finding that they combine grand narrative and detailed statistical tables with some innovative theoretical thinking. In the latest report, the grand narrative is one of progress – all countries have improved HDI in the past decade – and a shift in development power to the South. This combines good news and a clear argument about the need to reflect changed global geopolitics.  The theoretical innovation for me lies mainly in one box, derived from a background paper by Frances Stewart, about the need to move human development and capabilities theory away from its strongly individualistic grounding by thinking about “social competences”.  I need to get Stewart’s background paper and examine this more closely, but the notion is insufficiently developed in the main report to really judge whether it amounts to anything.

Unfortunately, this sense of potentially important ideas remaining underdeveloped is my overall impression of this HDR.  It also hints at an evolving view of development that could be quite salient to the post-2015 debate, but without really delivering on a compelling vision.  Thus, we get a notion of the importance of developmental states and new mechanisms for global governance that would complement the basic needs / human rights core of the human development and capabilities approach. But this is little more than an unfinished sketch of what a fully theorised developmental landscape might look like.

Most pertinently for a NORRAG audience, Helen Clark’s foreword indicates a strong view about education, skills and work:

‘Pro-poor policies and significant investments in people’s capabilities—through a focus on education, nutrition and health, and employment skills—can expand access to decent work and provide for sustained progress’. (iv)

Reading the foreword, this is apparently central to the HDR’s vision but as I read the report proper I became increasingly frustrated and finally concluded that the authors lacked any real understanding of the education, skills and work notions contained in the above.  At the heart of this problem is that the report appears to be written by economists who are operating in a largely human capital paradigm, notwithstanding the large-scale attacks that capabilities researchers have made on this position. Education and skills are largely interchangeable terms in the report and exist in a black box.  When claims about education are made, the references are to large-scale international econometric analyses alone.  The phrase “employment skills” never once resurfaces after Clark’s foreword.

The authors do try to open the black box on pages 78-80 in a sub-section entitled “Access to high quality education” but this is simply not fit for purpose.  To pick just three problems with this: it has no idea of what it means by either access or high quality; it contains only one reference – to a minor internal World Bank paper on the “successes of UPE in Uganda”; and it picks examples apparently  at random, with no discernible grasp of what is important in the field.  Thus, Ghana’s curricular reforms of 1987 are offered as an example of good practice in providing access to high quality education. This is counter to what the literature would suggest, and ignores the major further reforms 20 years later.  Nowhere is there a sense of the debates that have taken place in the academic literature about the challenges of both access and quality. When this has been treated so effectively by another UN agency – in UNESCO’s GMRs – this really is inexcusable.

Having worked on a world report, I know that they have long lead in times and that one can be extremely frustrated as another major report appears in the gap between report completion and publishing. Whether this was the case here, it is very striking that the HDR 2013 does not cite any of the reports of late 2012 on the education, skills, work nexus.  This would be less serious if there was any grasp of the debates with which these reports were engaged.  Ultimately, Clark’s foreword appears detached from a report that lacks a meaningful sense of concepts that she identified as key to it: “access to high quality education”, “employment skills”, “decent work”. Her foreword offered the hope of a maturing human development account that could seriously engage with issues about sustainable and just economic development and offer an important pointer to the post-2015 debate.  However, the report fails to do this.

Simon McGrath is Director of Research and Professor of International Education and Development, Faculty of Social Sciences, University of Nottingham. Email: simon.mcgrath@nottingham.ac.uk