This text summarizes some of the ideas presented at the annual CIES conference (10-15 March 2013) during the NORRAG panel devoted to ‘Education Post 2015: Re-invigorating the agenda, or reshuffling the lobbies?’

Since 2000, the international education agenda has been defined by two parallel frameworks. The first, an education-specific agenda defined by the Dakar Framework of Action to reach Education for All (EFA), articulated six goals to meet the ‘basic learning needs’ of all children, youth, and adults through a combination of formal and non-formal provision. Several months later the same year, the UN adopted a comprehensive development framework that outlined eight Millennium Development Goals (MDGs) that aimed to halve world poverty, improve health and education, and regenerate the environment in the world’s poorest countries. The MDG framework included two education goals/targets related to universal primary education and gender equality (narrowly equated with gender parity) which were adopted (and adapted) from the EFA framework.

A progressive narrowing of focus, scope and relevance

As EFA became progressively overshadowed by the more comprehensive MDG framework that became the main reference of the international aid to education community, the focus, scope, and relevance of the global education agenda narrowed. Indeed, while the broader EFA framework articulates six EFA goals around formal and non-formal basic education for all children, youth and adults, the education-related MDGs focus essentially on children and primary schooling. This narrowing of the international education agenda consequently implies a focus on lower-income countries where the challenge of ensuring access to a complete cycle of primary schooling is the greatest. This has also progressively led to a lower perceived relevance of the EFA agenda to middle-income countries, emerging economies, as well as to OECD countries where there is greater concern with the expansion of relevant education and skills development opportunities for youth at secondary and tertiary levels. 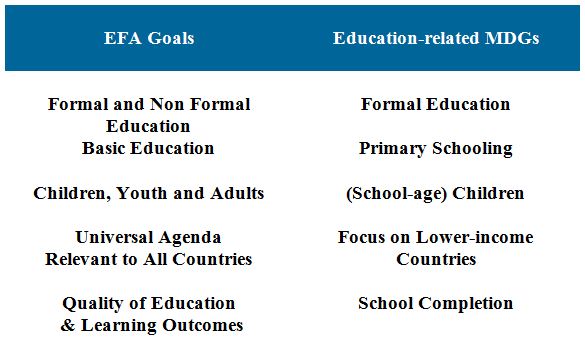 The education-related MDGs also neglected the central dimension of the quality of learning central to the EFA agenda. The concern with improving the quality of education in order to ensure effective and “measurable learning outcomes […] especially in literacy, numeracy and essential life skills” inherent to the EFA 2000 framework, was forsaken for a sole focus on universal access to primary schooling. This EFA preoccupation with the quality of education dates back to the 1990 Jomtien framework where concern was expressed, not only with effective learning and learning achievement, but also with the relevance of learning in terms of ‘behavioural change’ and impact on health, productivity and employment. Furthermore, the Jomtien framework also articulated concern with the relevance of knowledge, skills and values for sustainable development.

In short, between Jomtien 1990 and Dakar 2000, the dimension of relevance of learning appears to have slipped from the EFA framework. Moreover, in the shift of focus from the broader EFA framework to the MDGs in 2000, the dimension of effective learning was also lost in favour of a focus on equitable access (to primary schooling). As a result, there appears to have been a progressive narrowing of international education approaches from one concerned with equitable access to effective and relevant learning for all children, youth and adults, to one focused solely on the completion of primary schooling. It is in this context that the new UN Secretary General’s Global Education First Initiative, launched in 2012, reintroduces a more comprehensive approach to international education, articulating the three dimensions of equitable access (to schooling), effective learning, and relevance of education for wider societal development. These dimensions are reflected in the initiative’s three priorities; (1) Putting every child in school; (2) Improving the quality of learning; and (3) Fostering global citizenship. While the first two priorities correspond to what is now being qualified as the ‘unfinished EFA agenda’ (access and quality of learning), the third priority re-introduces the dimension of relevance initially articulated in Jomtien. 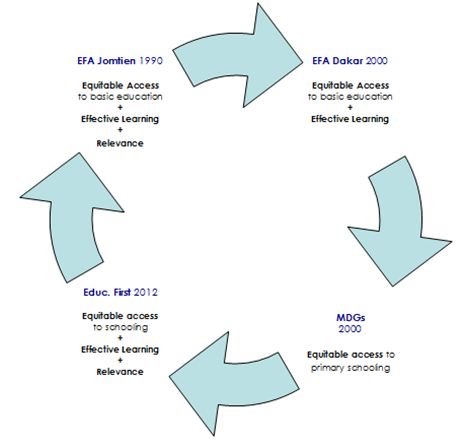 We thus appear to be coming full circle since 1990. With this in mind, it is surprising that current global debates on education post-2015 are ‘rediscovering’ that effective learning is a central issue and that equity and quality are now seen as ‘emerging’ issues. After all, what has the EFA movement been about if not about promoting equitable opportunities for effective and relevant basic learning for all? Why have we come full circle in international education development discourse? What does this tell us about international aid efforts engaged in since 1990 within the framework of international education and development frameworks?

The views expressed are those of the author are not necessarily representative of UNESCO’s own views.