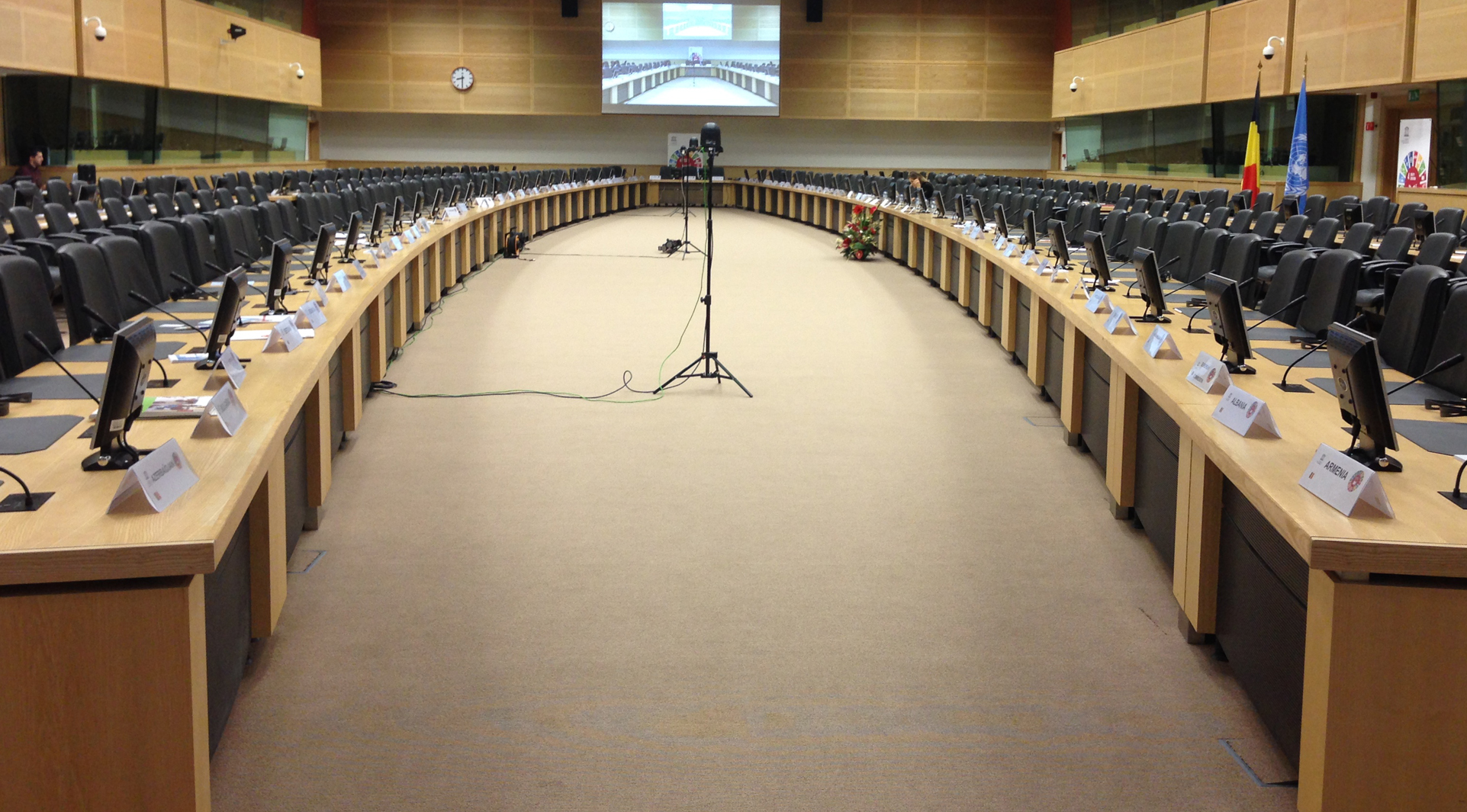 This NORRAG Highlights is published in connection with the first Global Education Meeting which took place on 3-5 December 2018 in Brussels, Belgium. In this post, Will Brehm, Assistant Professor at the Waseda Institute for Advanced Study at Waseda University, Tokyo, Japan and host of FreshEd, a weekly podcast on educational research, gives a personal account of the event and the lessons he learned from it. This post also features recorded interviews of participants at the meeting which was convened by UNESCO in its role as lead agency and coordinator of the Education 2030 Agenda.

The first Global Education Meeting (GEM) since the 2015 promulgation of the United Nation’s Sustainable Development Goals (SDGs) was held in Brussels in early December. The purpose of the meeting was to review “progress towards the global education targets and commitments in the 2030 Agenda for Sustainable Development” (GEM homepage) and subsequently set the international community’s education agenda for the next four years. The meeting resulted in the Brussels Declaration and outlined key messages to be discussed at next year’s United Nations High-Level Political Forum, which will focus on education. Bringing together ministries of education from 60 UNESCO member-states, multinational institutions, civil society organizations, and the private sector, the 350-person meeting celebrated the global commitment to the education SDG, SDG 4, while noting challenges to achieve targets by 2030.

In an effort to record part of the SDGs’ formative history, I reflect on six lessons I learned from the meeting, which I attended as a member of the press. Sitting in a translator’s booth on the conference sidelines, I recorded sessions and interviewed participants, four of which will air as FreshEd podcasts. Through the lessons, photos, Twitter posts, and audio clips presented below, I hope my first-hand account of the GEM offers insights into the minutia of global education governance.

The Brussels Declaration noted that the international community is “not on track to achieve the SDG4 targets by 2030” (p. 1). Despite many reasons why this may be the case, Aaron Benavot, the former director of the Global Education Monitoring report, reminded me that history matters. The very process of creating the SDGs in the early 2010s, he explained, is the primary reason why today global consensus has not been reached on measuring some targets. In my conversation with Aaron, which will air on FreshEd December 24, he suggested that the SDGs were developed by member-state representatives who had little expertise in statistics or education. Unlike the Millennium Development Goals, targets and indicators were designed after – not in conjunction with when – the SDGs were created. For Aaron, this history is important because it has structured (and limited) the very debates about SDG 4 today. Listen to Aaron explain his take on the importance of history:

SDG 4.7 focuses on quality outcomes of education to promote sustainable development. Aaron Benavot claimed this target was “without precedent” since it focused on outcomes rather than inputs. But the target is possibly the most problematic. How will the international community reach consensus on measuring the myriad terms contained in the target, such as “global citizenship education” or “education for sustainable development”? In a presentation by UNESCO Institute of Statistics Director Silvia Montoya, she posited that SDG 4.7 is at risk. Methodological challenges coupled with limited funding make its future uncertain. The key slide was captured in a Tweet by Yona Nestel:

And here is Silvia expressing the risk in her own words:

Astute listeners will realize that Silvia, who joined FreshEd on December 17, did not say what would happen to indicators without adequate funding or global consensus on their measurement. In my conversations with conference-goers, however, I learned that global indicator 4.7.1 may be discarded altogether by the Inter-Agency and Expert Group on SDG Indicators, the group “tasked to develop and implement the global indicator framework for the Goals and targets of the 2030 Agenda” (IAEG-SDGs website). Indeed, an IAEG-SDG meeting on December 13 decided not to upgrade indicator 4.7.1 from Tier III to Tier II. Another review will happen in 2020, which will mark the fifth anniversary of the SDGs.

The importance of process 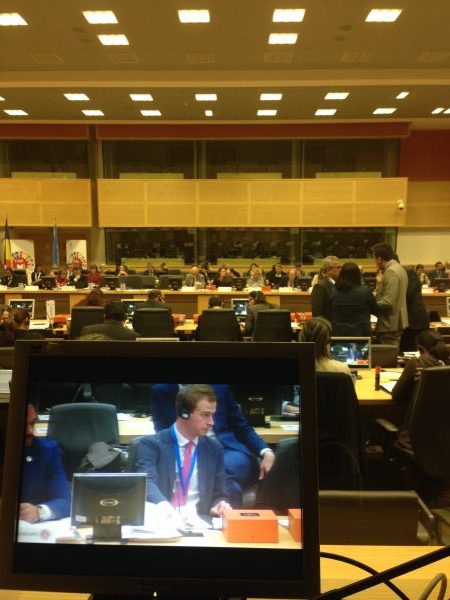 International meetings that produce declarations are filled with public and private negotiations on what should be included or excluded in the final document. Semantics are paramount in global governance. The 2018 GEM was no different. The public session on the draft declaration saw UNESCO member states voice concern on the precise wording of sentences or on absent topics. After each pronouncement by a member-state, private discussions followed on the sidelines. In one example I witnessed, Russia recommended changes to parts of the draft declaration. Listen to an English interpretation of the Russian delegation explaining its objections:

Reading the final declaration with these comments in mind makes clear that Russia’s suggestions were later embraced by the international community. This small moment taught me the importance of process; consensus-building is at the heart of global governance. 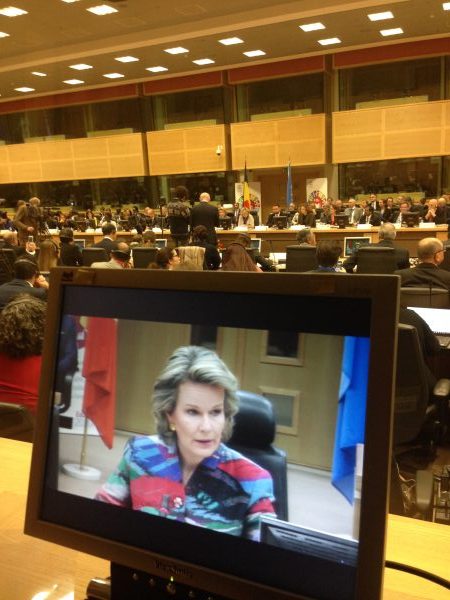 On the second day of the conference, Queen Mathilde of Belgium entered the room and the audience spontaneously stood in deference. There are of course protocols and etiquette for royalty with which I was obviously unversed, as in the sanctity of my translator’s booth I continued to sit. I’m not naïve to the economic machinations behind this respectful display (Belgium hosted the GEM), but at the same time I couldn’t help but think about the contradiction of celebrating royalty at a meeting focused in part on reducing inequality. As I continued to sit, I dwelled on the larger absence hiding in plain sight: the lack of any class analysis.

Parfait’s insight about the false hope of meritocracy leading to social mobility is important. (You can listen to my full conversation with him on January 7.) The SDGs assume meritocracy is universal and that education is, subsequently, a panacea for all social ills. If only more people can receive more and better education, then not only would their lives improve individually but society in general would develop. Yet the belief in the ameliorative potential of meritocratic education is challenged once issues of social class enter the conversation. Thinking about inequality without social class leaves social mobility, as Parfait says, a dream deferred for most people.

Capitalism as a given

The SDGs assume economic growth and environmental sustainability can co-exist. SDG 8 aims to promote economic growth while SDG 13 calls for urgent action against climate change. There is an emerging conversation, however, that finds growth causes climate change. Not only has such a conversation appeared on the NORRAG blog, but also heterodox economists have proposed ways to include energy into the production function, unsettling many neoclassical economic assumptions. Even a background paper for the UN’s Global Sustainable Development Report 2019 finds that the global economy will need to change because of the exploitation of earth’s resources. It is now impossible to miss the damage done to earth from pursuing constant economic growth.

What then of education and SDG 4? The meeting said little. There was neither any critical reflection on education’s role in perpetuating the assumption of constant economic growth nor deliberation over the power of education to inculcate values and beliefs beyond commodification and consumerism in future generations. Only one person even dared challenge the commonplace assumption of capitalism as a given. Here is Arjen Wals, who will join FreshEd on January 14, diplomatically calling for new economic logics:

A recurrent message at the GEM was the funding gap in education. Billions of dollars are needed to meet the targets of SDG 4. Since neither development nor humanitarian aid will cover recurrent educational expenditures, the heart of education financing revolves around domestic funding. Yet, at the GEM it was more common to hear conversations about international aid rather than domestic tax systems. Aid not tax was the unstated assumption. David Archer captured this paradox in a Tweet:

Formal opening of the Ministers’ segment of the #GlobalEducationMeeting – 350 people gathered to review #SDG4 .. so much more to do. It is said 97% of funds must come from domestic resource mobilisation but we still spend 97% of time talking about aid rather than tax justice! pic.twitter.com/xf2BOFyF1z

Until the international community aims to create fiscal states, as Keith Lewin pointed out, its aid to poor nations will have the unintended consequence of creating dependency, not development.

The 2018 GEM was a valuable experience where I witnessed global education governance firsthand. From my little glass box, global governance was neither black nor white. It was not one thing over another. It was a political arena governed by diplomatic social norms, where compromises were made, competing value systems clashed, and collective action hammered out. Some ideas were left unsaid while others maintained undue importance. Understanding this minutia will hopefully help the NORRAG community follow future developments of the SDGs, at least until the next Global Education Meeting.

Will Brehm is an Assistant Professor at the Waseda Institute for Advanced Study at Waseda University and host of FreshEd. He attended the 2018 Global Education Meeting through the support of the Graduate School of Education at the University of Tokyo and Education International. willbrehm@aoni.waseda.jp