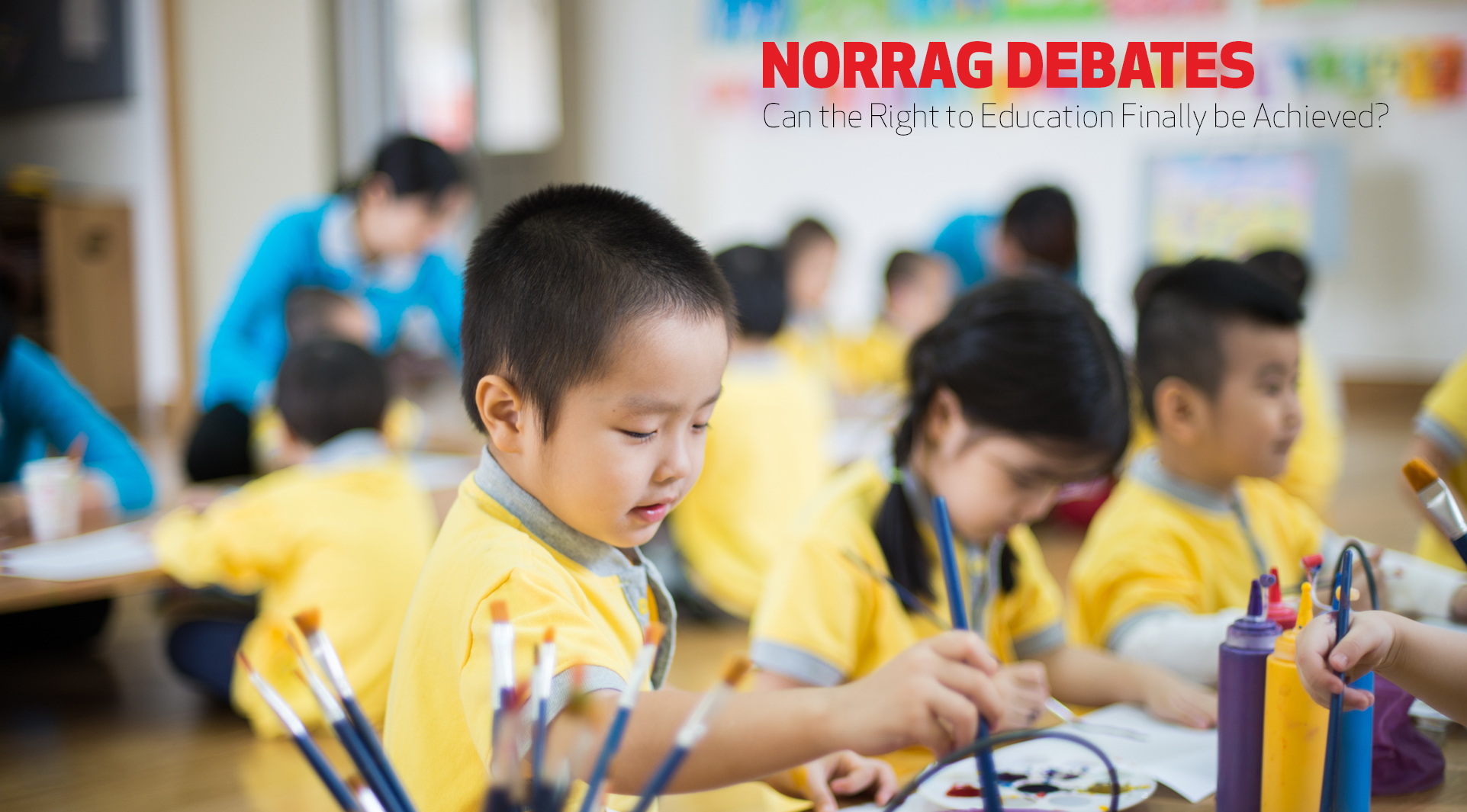 As part of the NORRAG Debates stream, NORRAG is starting a series of blog posts by bringing to the fore questions surrounding the realisation of the right to education (RTE). As the global education community makes progress towards the realisation of the ‘SDG 4 – Education 2030 Agenda’, questions related to ensuring the RTE of all children are re-emerging. Consequently the tension is building between fast and measurable progress and country-specific and qualitative progress towards the SDG vision. One question within this debate concerns the Global Education Reform Movement (GERM) and its impact on Early Childhood Education and Care (ECEC) in the context of the RTE. Indeed, what impact are GERM policies having on ECEC? Are GERM policies fundamentally flawed, and if so, how? Do GERM policies really result in better ECEC for all? How can we mitigate the negative effects of GERM on achieving the RTE? Drs. Helge Wasmuth and Elena Nitecki, Associate Professors in the Department of Early Childhood and Childhood Education at Mercy College, respond by giving their thoughts on the GERM and the challenges it poses to realizing the right to ECEC.

The Global Education Reform Movement – better policies for who?

While the international community is making progress toward the realization of the SDG4 – Education 2030 agenda, ECEC is being reshaped by a variety of policies, many of which are rooted in troubling assumptions. These policies, which aim to ‘reform’ and ‘improve’ education, have been summarized by Pasi Sahlberg as the “Global Education Reform Movement” (GERM). It is not one specific policy, but rather an unofficial educational agenda that shares certain assumptions which are deeply rooted in neoliberal thinking and Human Capital Theory (HCT). Variations of GERM policy have been adopted in predominantly Anglo-Saxon countries, however elements of this reform logic have spread worldwide. They are promoted globally by transnational actors such as the World Bank, philanthropists, education consultancy firms, private corporations engaged in education policy change, corporate lobbyists, corporations, or the OECD, which is currently planning and implementing the International Early Learning and Child Well-being study (IELS) in secrecy, to name but a few. Key features include increased standardization, test-based high-stakes accountability, pre-determined learning outcomes, control over teachers, business-based management models, and privatization. These broadly unpopular policies are opposed by educational scholars, as they have little or no evidentiary basis, and are viewed as damaging to ECEC. Still, such thinking, accompanied by the globalizing notion of universal best practices in ECEC which ignores local traditions and contexts, has become the dominant discourse in education. Contrary academic voices meanwhile, are regularly ignored or belittled.

SDG 4, Right to Education, and GERM – the need to avoid hijacking

So how does SDG4, with its goal to ensure that all children have access to quality ECEC by 2030, and the Right to Education (RTE) fit into the current landscape that GERM has created since the 1980’s? While the RTE is accurately perceived as a powerful means to combat persistent social and economic problems, it also needs to be examined critically to mitigate unintended consequences. Indeed, these are lofty goals, but as with most large-scale multi-faceted endeavors, there is a real danger of further damaging ECEC. If the details are conceived and implemented on a grand scale, while ignoring local traditions and contexts, RTE will become just another part of the GERM trend. Thus, the first step in avoiding this danger is to comprehend the GERM context that currently exists. This includes not only understanding GERM policies, but also how they affect local communities. Arrogant universal claims and careless policy implementation are two major reasons why GERM policies fail to improve education – a one-size-fits-all approach is simply not sufficient. Everyone working on the implementation of RTE and SDG-4 should therefore be asking – how can RTE avoid becoming part of GERM?

Early Childhood Care and Education is not about economic returns

First and foremost, we must untangle the troubling policies of GERM, which have recently trickled down into ECEC. These policies are flawed in several ways. They are based on inconclusive and suggestive research, whereby high-quality ECEC programs are perceived as an investment in human capital, which through a more productive workforce and reduced social services and remedial education costs, will allegedly lead to a multitude of societal gains and strong economic returns. Although this logic seems reasonable, two major flaws are clear. First, while attractive to policymakers, this view is far too narrow. An investment in ECEC will not solve the vast problems of poverty, poor prenatal care, unemployment, and numerous other social ills, many of which are rooted in inequality. Indeed, HCT oversimplifies complex problems and ignores children’s rights altogether. In this sense, ECEC is used as a means to absolve society’s conscience when confronted with these issues. If policymakers are serious about improving education, it is vital that poverty itself is recognized as the primary roadblock. Secondly, education reform needs to achieve more, beyond the defined academic and economic outcomes, especially if the priority is achieving the RTE. Educational reforms should extend beyond economic gains to “contribute to the development of personal integrity, social democracy, and human decency… the advancement of the human spirit” (Hargreaves, 2009, 89). These important aspects of education are currently being lost through the implementation HCT-based GERM policies.

GERM policies do not reduce inequalities

The assumption that GERM will diminish inequality is deeply flawed. In the eyes of GERM, ECEC is seen as another commodity, which is why we see a trend of privatization. Proponents of privatization argue that competition, parental choice, and a free market, ensure that all children receive an equal education. However, there is little evidence to support this assumption. For example, since the implementation of GERM policies in Sweden, inequality has increased. Sweden, previously at the top of UNICEF’s overall league table of inequality in child well-being in rich countries, is now positioned marginally above the bottom third. Moreover, in the United States, access to high quality ECEC still depends on the parents’ ability to spend thousands of dollars on private preschools or on their capacity to navigate the complex system of options. This leaves most low-income children in programs that are affordable, yet too often of poor quality.

Additionally, in the Global South, privatization of primary education is clearly exacerbating the effects of inequality, a dismal outcome if ECEC follows suit. So-called ‘low-cost private schools’, that target relatively poor households by offering an allegedly affordable education, are expanding poor quality worldwide. Most families cannot afford these ‘low-cost’ fees and must therefore forego basic needs or else withhold their other children (usually girls) from school. In Liberia for example, the outsourcing of educational systems to private providers, known as a Public-Private Partnership (PPP), is not only opposed by the majority of local communities and organizations, but also viewed by many human rights and child advocates as a threat to the RTE. Moreover, courts in Uganda and Kenya have ordered the closure of schools run by Bridge International Academies, a global chain of low-cost schools supported by illustrious names, such as Bill Gates, Mark Zuckerberg, Pearson, and the Word Bank, because they violated the educational norms and standards in these countries. It is only a matter of time before the same trends occur in ECEC.

It speaks volumes that the Human Rights Council recently adopted a resolution that urges all states to “address any negative impacts of the commercialization of education” (HRC/32/L.33). Indeed, privatization does not fight inequality, rather it increases it, only under the rouse of choice. The push for privatization therefore looks more like a modern form of colonization and exploitation than a sincere investment in children or in the development of sustainable educational systems. Indeed, ECEC is a public good and should be treated as such. It is already recognized as a human right by many countries in their implementation of the RTE. Yet, privatization creates a situation in which there are winners and losers, the losers further victimized by the growing effects of poverty and inequality. Education is a public good, an important aspect of a functioning democracy and governments must provide excellent education for all children. Privatization therefore needs to be revealed for what it is: an attempt to undermine every child’s right to a decent education provided by the government.

Avoiding the integration of RTE in the GERM is a must

Given these flaws, the question must be asked: why do GERM policies persist and continue to gain influence? These policies are clearly not benefitting children, and are certainly not eradicating inequality. Rather, they are fostering divided education systems, with high quality education for those with money and power and low quality for the vast majority. The impact on ECEC settings worldwide is disastrous and has led to an increase in direct-teaching, standardized learning, school-readiness and test-preparation, and a narrow curriculum with less space for creativity and play.

So who is benefiting from the implementation of these misguided policies? Why are corporate lobbyists, private companies, hedge-fund managers, and philanthropists investing in what should be a public good? Education has become a billion dollar market for those with access. It is becoming a pay-to-play system in which those with money and power are manipulating education to satisfy their own ends. They are motivated to keep a system in place that will continue to generate profits and ensure privilege by making a public good simply another commodity.

What does this mean for those who want to achieve the RTE? There is a real danger that the RTE could become part of the GERM. To avoid that, the willingness to look critically at one’s own work, and to discuss unintended consequences openly, is a necessity. Local voices and practices must also be considered. Close examination of GERM policies and the related trends of privatization reveal that the RTE cannot thrive in a climate of GERM infestation. The RTE will become a reality only if we are willing to take into account local perspectives and contexts, and also consider the variety of ECEC research that exists outside of the mainstream – and if we are willing to confront GERM policies and the accompanying inequality.