By Desmond Bermingham, Save the Children.

Global ‘mega-trends’ are having an impact on education: Slowing population growth and an ageing population; the continuing and growing threats resulting from climate change; the eastwards shift in the economic centre of gravity; and the exponential growth in access to mobile communications technology are changing the world we live in. We need a much deeper reflection on the implications of these trends for the post-2015 agenda in education.

At the December 2012 UKFIET-DFID Dialogue Day on Education and Development to 2015 and Beyond, I described how the global environment for the post-2015 frameworks is significantly different from 2000 when commitments were made to the MDGs and EFA goals. Global ‘mega-trends’ are shaping the social, political, economic and physical landscapes in important ways which will have profound implications for the future of education.  Save the Children have just published a paper on the critical steps needed to ensure that the poorest and most marginalised children are not left behind.  Below, I have selected four of what I consider to be the most important trends and their possible implications for future education.

1. The world’s population profiles are changing.  Population growth is continuing but at a slower rate in most regions of the world with the notable exception of sub Saharan Africa.  Demographers estimate that global population will peak between eight and ten billion in 2050 (UN DESA, 2013).  Older populations (50+) will increase from 1.6 billion to 3.1 billion by 2050 and will make up 25% of Asia’s population and nearly 30% of Europe’s by 2025.  The youth bulge (14 – 24) is flattening in most parts of the world:  after rising from 700 million in 1970 to 1.2 billion in 2010, the projected total for 2050 is 1.25 billion.   More people now live in cities and towns – and this trend will accelerate to reach 6.3 billion by 2050.  These trends provide both opportunities and challenges for future education.   Providing secondary education to girls is the single most effective intervention to reduce population growth (Cohen & Malin, 2009).  Slowing growth in child and youth populations will allow education systems in low income countries to consolidate access gains and focus more on improving quality.   Providing good quality education to denser populations in towns and cities should be less costly and more efficient. However, the decline in working populations and the increasing dependency ratios in many middle income and high income countries will place additional burdens on government finances.

2. Global warming continues to grow and the impacts of climate change are intensifying. Falling crop yields, rising sea levels, loss of eco-diversity, and extreme weather events are increasingly disruptive of secure and stable lives and livelihoods (IPCC).  This will place increased pressure on already scarce natural resources, especially fresh water.  It will also lead to increased migration both within and across countries as well as larger numbers of people affected by flooding and other natural disasters.   Education has a critical role to play in teaching young people about the science of climate change; changing behaviour to secure a more sustainable future; and providing the skills and knowledge young people will need to survive in an increasingly fragile world (UNESCO, 2010).

3. The global economic centre of gravity has shifted.   Growth rates of over 5% per annum are now characteristic of China, India, Sub-Saharan Africa and Indonesia.   Official foreign exchange reserves in emerging economies are almost double those of the “rich world”.   It is projected that China will pass the US to become the largest economy in the world by 2020, if not before.  If current growth rates continue, five out of the top ten economies will be countries that are currently considered to be ‘emerging’.  This is a reversion to patterns of the pre-colonial period (See table below). 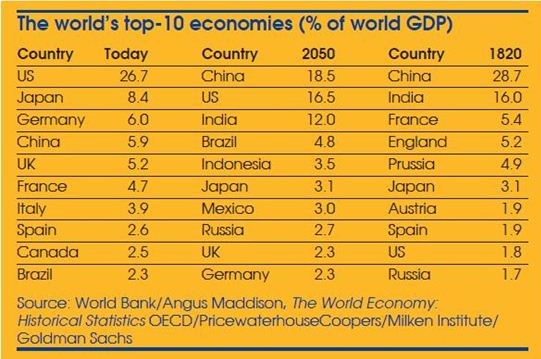 Many of these countries have built their economic growth on education.  China and India have been responsible for the majority of the decline of out of school children over the past two decades. Countries like Indonesia, South Korea and Singapore have led the world in education innovation.  Mexico has implemented wide-scale financing programmes to reduce education inequities and raise achievement among the poor.  There will be many lessons to share across these new economies.

4.  Technology is transforming our lives – and making learning possible in new ways and new places.  In 2002, only 2 countries had 100% mobile penetration – in 2010 this had risen to 92 countries (ITU, 2012).  Total mobile‐cellular subscriptions reached almost 6 billion by end 2011, corresponding to a global penetration of 86%.   Growth was driven by developing countries, which accounted for more than 80% of the 660 million new mobile‐cellular subscriptions added in 2011.   By end 2011, there were more than 1 billion mobile ‐broadband subscriptions worldwide although developing countries are lagging behind with less than 5 subscriptions per 100 inhabitants.   We are just beginning to see the transformative effect on education systems of this increased access to technology and information.  The recent emergence of massive open online courses (MOOCs) has led to hundreds of thousands of students accessing courses from elite universities for free.  Open schooling has also led to the creation of mega-schools.  New technologies and access to open education resources could provide learning opportunities for millions of young people in developing countries over the next decade.

This is just a selection of the trends and possible implications for future education.  It is likely that other trends will emerge that we cannot predict.  What is clear is that we must take account of the massive global shifts in our thinking about the post 2015 education agenda if we are going to create an education system which is able to meet the needs of future generations of young people.

Desmond Bermingham is the Director of the Save the Children Education Global Initiative. Email: desmond.bermingham@savethechildren.org

An earlier version of this blog post appeared in NORRAG NEWS 48, 2012: The Year of Global Reports on TVET, Skills & Jobs Consensus or diversity? (April 2013), available free online at www.norrag.org