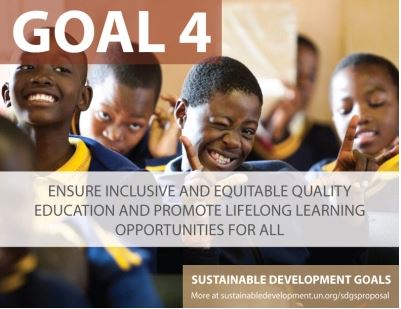 Almost exactly a year ago, we told readers of the NORRAG Blog: ‘We [in NORRAG] are looking critically across this whole extraordinary process [of post-2015], and trying to capture and summarise some of the key directions – for the benefit of the many readers who just can’t keep up with the tsunami of activity around Post-2015.’ We have tried to do this through NORRAG News 52 which focused on Reflections on the World Education Forum and on Financing for Development. The hundred-year history of the move towards the global targeting of education and skills is also captured in NORRAG Working Paper 9.

At the start of the calendar year 2016, we can also bury the phrase ‘post-2015’.  It only came into fashion around 2012, and it lasted till the UN General Assembly adopted the 2030 Agenda for Sustainable Development in September 2015. But I wonder if the phrase, ‘post-2030’, will emerge around 2027, as future policy-makers debate what might be the world’s next goals after 2030. Or will the grand ambitions by 2030 ‘to end poverty and hunger everywhere’ and to ensure that ‘all human beings can enjoy prosperous and fulfilling lives’ have actually come to pass, as proposed in the 2030 Agenda of this year?

Milestones in the 2015 safari towards the sustainable development goals

There have been a few key staging posts towards the SDGs:

Arguably, this Forum came much too late in the whole Sustainable Development Goal (SDG) process to be really influential. There was of course an agreed Incheon Declaration. But no formally agreed Framework for Action, and therefore no final Goal or Targets as there were in Dakar 15 years earlier. These were being debated in the United Nations at the very same time as Incheon; so, wisely, the World Education Forum decided to wait for the outcome of the UN process, rather than have two sets of education-related goals as we saw for the 2000-2015 period. When, finally, UNESCO’s General Conference debated and agreed the Education Goal and Targets in November 2015, they were no longer the same as the draft framework for action that was available in Incheon. Rather, they were identical to what the UN General Assembly approved in September 2015. This might suggest that, unlike Jomtien (1990) and Dakar (2000), when education constituencies decided on their own goals and suggested targets, Incheon had no such leverage, but had to wait for the UN General Assembly to decide about the education side of the SDGs.

Very strategically, the Financing for Development summit steered clear of any discussions on goals or targets; its concerns were with resource mobilization to fund the world’s new development agenda, and especially domestic mobilization. When it did mention education, it was strongly implied that this could be a critical element in official development assistance (see NN52. p.50). There was a strong emphasis, however, on the role of science, technology, innovation and capacity building.

The UN General Assembly brought to an end the apparently innumerable debates about the goals and targets post-2015. Its key document, Transforming our World, followed very closely the Targets and Goals of the Open Working Group which reported a year earlier. The only major change was removing entirely the percentages attached to some of the Targets, which had suggested national determination. So instead of national percentages or universal coverage being set for the Targets, we get the vague phrase, ‘substantially increase’ or ‘a substantial proportion’ instead of a national or a universal target. Most disappointing of all these was the adult literacy target. Almost 65 years after UNESCO had declared that fundamental education (at basic and adult levels) would be a universal global goal, now in 2015, it was only to a ‘substantial proportion of adults’ that we would offer literacy and numeracy. This is hardly believable. It was the same with teachers; instead of going for qualified teachers universally, the SDGs only offered ‘substantially to increase the number of qualified teachers’. Another opportunity missed?

By contrast, the SDG 4 on Education also targeted universal access to so many other things, from quality early childhood education, to primary and secondary and to quality TVET and tertiary, not to mention global citizenship education and education for sustainable development, that it would be hard to say there were any priorities any more.

What about the world of work?

The same contradictions between universal access to so much versus restricted access on other dimensions was evident in the world of work.

So, on the one hand SDG 8 promised to ‘By 2030, achieve full and productive employment and decent work for all women and men, including for young people and persons with disabilities, and equal pay for work of equal value.’

On the other hand, it diminished the value of this universal aspiration and ambition by declaring in the very next sentence that by 2020 it would only ‘substantially reduce the proportion of youth not in employment, education or training’.

Similarly, the ‘worst forms of child labour’ were to be eradicated immediately, but ‘child labour in all its forms’ could continue till 2025.

Equally, the encouraged ‘formalization’ of the informal sector (micro, small and medium-sized industries) appeared to be more gradualist than the promise of decent jobs for all.

Universal or partial goals and targets: the case of migration

This trade-off between universal goals and targets versus restricted access runs through much of the SDG agenda.

For instance, in respect of the refugee crisis which has affected so many millions of people in 2015, the mention of migration in the SDGs is very bland:

‘Facilitate orderly, safe, regular and responsible migration and mobility of people, including through the implementation of planned and well-managed migration policies’.

This is a world away from the situation in 2015 with the migration of millions of people within the Middle East alone – especially to Jordan, Lebanon and Turkey – as well as the smaller number of about a million people that have migrated into the European Union, most of them to Germany. The words ‘orderly, safe, regular and responsible’ are not the terms that come to mind when thinking about the experience of 2015. The same terminology is used of refugees in Transforming our world, but it is surprising that the encouragement ‘to strengthen the resilience of communities hosting refugees’ is particularly stressed for developing countries.

There is apparently little coherence between the SDG 4 on education and skills and the SDG 10 which covers a much wider set of concerns about inequality.

We are going to try in NORRAG News 53 to draw together the SDG implications for education, skills and migration against this background of what is promised in the SDGs. We look forward to receiving ideas for contributions from the NORRAG membership.