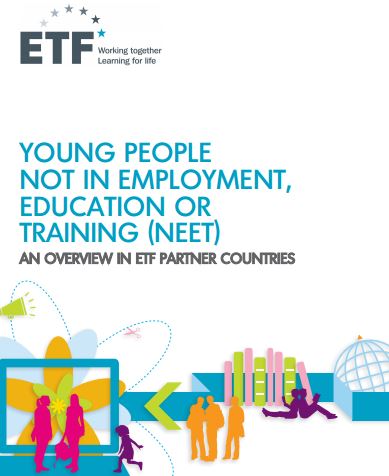 ‘Unemployed youth’ has typically been the focus of youth-related discussions, in both developing and transition countries (and indeed in the so-called developed countries). Looking at the whole picture, however, there are many more young people who are ‘at risk’ than only the unemployed; e.g. youth who lack access to learning opportunities and/or are not participating in the labour force. Young people not in employment, education or training (so-called NEET) in the European Neighbourhood was the topic of a recent study published by the European Training Foundation (ETF).

As anywhere in the world, individual and family characteristics (sex, education, socio-economic background, etc) seem to be first usual suspects affecting youth vulnerability in the developing and transition countries. What is surprising – or rather disturbing – is the sheer size of the NEET population, mainly due to the large failures of education and training systems and the poor functioning of labour markets; both not playing their expected roles. Rather than containing and counteracting the challenge, these (state-funded) education systems tend to reinforce the existing inequalities in societies and amplify the negative effects of individual vulnerabilities.

Indeed, very high numbers of young people are neither in education or training nor in employment. In thirteen out of 18 countries[1] covered in the study, more than one in every four young people between 15 and 29 years old are not in education or in employment. The ETF study shows that the risk of becoming NEET increases with age: it is lowest for the 15-19 age group, higher for 20-24 year olds and the highest for 25-29 year olds (Graph 1).

Yet, the high NEET rate of the 15-19 age group (on average 20%) is a sign of missed opportunities as these young girls and boys should normally be in education or training. An education system that pushes out 20% of its students at the age of 15 as ‘early school leavers’ without providing any credible alternative (e.g. vocational training) marks them for the rest of their lives. It is disturbing to see the very high percentages of early school leavers in Albania and Turkey which are the EU candidate countries.

NEET is a female condition. In most of these countries, an average of one in every three young women are likely to be NEET, compared to about one in five young men (Graph 2). Again, there is a wide variation based on gender norms and individuals’ role in society, the structure of education and vocational education and training (VET) systems, and the functioning of local labour markets. Most females who are not in education and employment are inactive and thus not looking for a job – they are mainly taking care of the family – while males are looking for a job. As an extreme case, 40% of young girls in Turkey are NEET (as against 18% of boys), out of which 93% are economically inactive, possibly with family care responsibilities.

Graph 2. NEET rate (15-29 years) by gender, and the percentage of NEET females and NEET males who are inactive 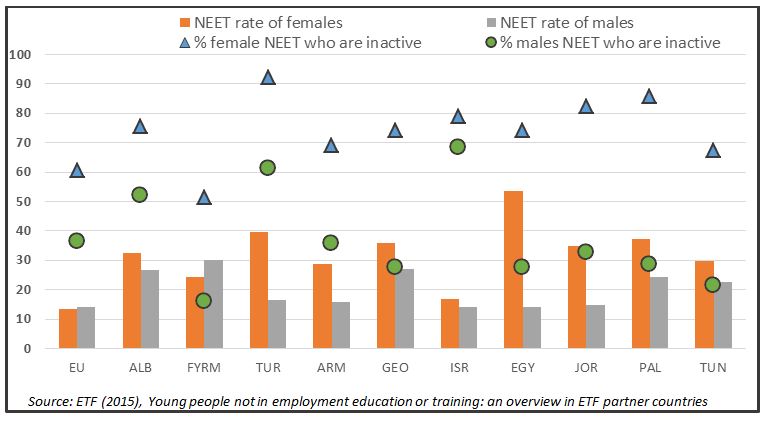 One might expect that education can help young people to find jobs, but this is not always the case. More education clearly decreases the risk of being NEET in some countries, while in others, graduates of upper secondary/post-secondary education perform poorly in entering the labour market compared to early entry of those with lower education (Graph 3). Young people from households with economic difficulties (for example, low income, unemployed parents), those from an immigrant background, or from groups that are at risk of being marginalised (for example, by language, as cultural minorities, such as Roma) have higher prospects of becoming NEET.

The NEET indicator visualises the existence of a very large number of ‘inactive youth’ who are not normally included in education and labour market statistics for various reasons (e.g. early school leavers, teenage mothers, those suffering from sickness, people with disabilities, and the discouraged)[3] – a situation which is exacerbated by a lack of suitable jobs for young people, and particularly young females. The vulnerability of these inactive groups is not simply a consequence of individual characteristics, but also the result of education, training and employment systems that fail to provide opportunities.

Higher number of NEET and wide variations across countries can be interpreted as signs of failing policies in education, training and employment. Through policies and support structures or the lack thereof, countries contribute to or counteract the negative impact of individual and family characteristics. For example, gender is a personal/ neutral characteristic, but government policies seem to reinforce the gender gap instead of addressing it. In summary, delivering effective public policies and social support structures in relevant fields is crucial to influence social outcomes; e.g. in areas such as childcare, primary and secondary education, vocational training, employment, healthcare, housing, and transport.

In many countries, secondary education makes little difference in preventing young people from becoming NEET, especially young girls. Therefore, we may assume the shortcomings with respect to the size, scope and quality of the education programmes provided at this level.[4] Significant efforts are needed to modernise the secondary education offer (upper secondary in particular) and to enhance the role of VET systems in providing second-chance opportunities for young adults. VET can be helpful as a credible alternative to higher education for many young people and assist in adapting the skills of the post-secondary graduates to the needs of the labour market.

‘Prevention’ is key to avoiding an uncontrolled increase in the number of young people becoming NEET and in breaking the cycle of social exclusion. Among many different policy options, countries need to prioritise the prevention of early school leaving, the modernisation of secondary education and VET provision, and the integration of young women into the labour force.

Ummuhan Bardak is a Senior Specialist in Labour Market and Migration at the European Training Foundation (ETF), which is a specialised EU Agency based in Turin (Italy). Email: uba@etf.europa.eu

[3] The discouraged or disengaged are those young people who are unemployed but not looking for job, mainly because they have lost hope of finding one.

[4] It should be noted that many university graduates can afford to “wait” for better jobs and so have late entry into the labour market. Indeed their waiting period is longer, but they tend to find good ‘career jobs’ at the end, while the low-educated cannot wait longer and have to accept any low-quality jobs. This is discussed in the report, but it is not the only reason of high number of graduate unemployment. There are also other reasons such as poor functioning of labour market, labour market saturation for high number of graduates, lack of right skills of graduates despite the existence of their diplomas, and other factors.