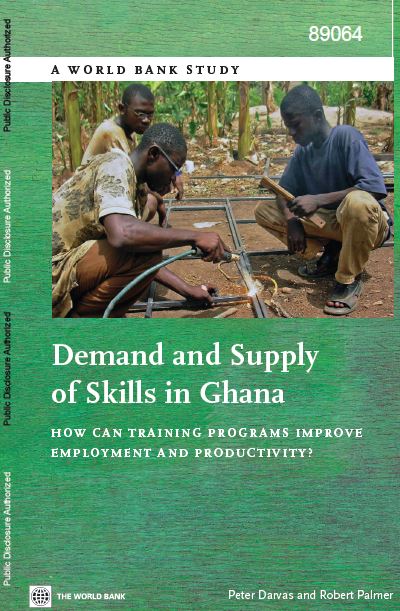 Ghana’s impressive gains in economic growth and in poverty reduction over the last two decades are built on weak foundations.  Several more decades of sustained growth are required for most of its citizens to sustainably break out of poverty. For this to happen, Ghana needs to: (1) increase productivity in the strategic economic sectors, (2) diversify the economy, and (3) expand employment. Raising the level and range of skills in the country provides a key contribution to these core drivers of sustained growth.

Skills development in Ghana encompasses foundational skills (literacy, numeracy), transferable and soft skills, and technical and vocational skills. These skills are acquired throughout life through formal education, training, and higher education; on the job through work experience and professional training; through family and community; and via the media. A new World Bank report focuses on one segment of Ghana’s skills development system: formal and informal technical and vocational education and training (TVET) at the pre-tertiary level. Although TVET alone does not guarantee productivity gains or job creation, it is generally agreed that a blend of cognitive, non-cognitive, intermediate, and higher technical skills is crucial to enhance the country’s competitiveness and contribute to social inclusion, acceptable employment, and the alleviation of poverty.

In Ghana, social demand for TVET is driven by a rapid increase in enrollment at the basic education level; in the last decade, enrollment in lower secondary school (Junior High School – JHS) increased by almost 50%. But post-basic opportunities remain limited; of those that complete the 3 years of JHS, half (over 200,000 students) do not make it to further formal education and training. About eight out of every ten youth 15-17 years of age are not enrolled in senior high schools, and only 5-7% of JHS graduates can except to find a place in either public or private TVET institutes. Despite such social pressures, enrollment in virtually all public TVET institutes has been either static or in decline over the last few years. It appears that social demand for private TVET is also declining. The bulk of all post-basic education and training opportunities, therefore, continue to be provided by academic senior secondary schools and by the private informal apprenticeship system. Social demand for TVET is influenced by a range of factors, chief among them its low prestige value. TVET remains less popular than general education, regarded by many as a better preparation for the available formal employment opportunities.

The economic demand for TVET by the private sector appears to be low. The overwhelming majority of Ghanaian firms covered by the World Bank Enterprise Survey, regardless of their size, do not perceive the skill level of the workforce as a major constraint. This is likely a result of the low-skills equilibrium that the economy and its private sector – from MSEs to larger companies – find itself in. However, it is not clear what types or levels of skills enterprise respondents were referring to when responding to the surveys. Neither is it clear which skills are rewarded by the private sector and which ones are not. For instance, the World Bank Enterprise Survey aimed to assess the workforce’s skill levels, but only asked enterprise managers if their workforce was “inadequately educated.” To complicate matters further, other surveys have produced opposite results.

The Ghanaian government still acts as a large provider of skills in the country and there are approximately 200 public TVET institutes, with about 40,000 students; the Ministry of Education’s technical training institutes account for over 70% of this enrolment.

Quality deficits in public and private training providers hinder training delivery, and the labor market relevance of TVET is generally poor. Almost all data on formal TVET provision relate to supply-side issues, and there are little or no data on quality, efficiency, financing, outcomes or impact.

Industry training is offered in Ghana’s small formal sector. Firms of all sizes offer formal training, although medium and especially large firms are more likely to do so than small firms.

One of the most serious failures regarding TVET in Ghana has traditionally been that of coordination of providers, qualifications, strategies, polices, legislation, and development partner support. Unsuccessful attempts have been made since the 1970s to rectify this failure. In 2006, a new TVET council was established, the Council for TVET (or COTVET). While COTVET faces several challenges related to financing, capacity and image (being perceived as a Ministry of Education entity), it has made some initial steps towards better coordination of TVET supply side with the set-up of committees related to qualifications and quality assurance, as well as towards coordination of TVET demand, with the set-up of committees concerned with industry and a skills development fund (SDF).

There is still insufficient coordination with government strategies and plans – both between different TVET-delivering MDAs, and wider development strategies. This has led to the development of parallel agendas, plans, programs and committees. Very significant resources are still being spent by the government on TVET activities that are not coordinated with COTVET, and largely operate independently of the main TVET-delivering MDAs. Ghana’s forthcoming national skills strategy should aim to complement, and be complemented by, reforms that are underway in related sectors (for example, private sector development and employment, the informal economy, information and communication technologies, and agriculture).

At the system level, the identification of diversified sustainable sources of funding for TVET requires urgent attention; over ten years have passed since this was first identified as a pressing issue and no real progress has been made. In 2010, one piece of a future financing framework was set up – a Skills Development Fund (SDF) – with World Bank and Danida support containing four competitive funding windows. The establishment of the SDF represents one of the more innovative elements of the ongoing reform. Channeling the majority of TVET resources through a SDF will make it easier for funds to be allocated in line with general national socioeconomic priorities and specific priorities identified by COTVET.

The public financing approach and general lack of incentives to improve TVET in Ghana help to perpetuate a supply-driven, low-quality skills system that responds very poorly to the needs of the economy, and especially its growth sectors. Public financing incentives are lacking for training providers to deliver better services, for employees to improve their skills and employability, and for employers to train more. Where public funding has been used to support private informal apprenticeships it often does so in a way that risks substituting for private financing, and where it has been used to support short duration skills training, it is often done so in an inefficient way. Much public spending on TVET is not targeted at the poor but is captured by those who are less in need, thus widening inequalities. For example, it is estimated that only 19% of the public spending for MOE vocational education reaches the poor. Another example of inefficient use of public subsidies is inherent in the financing of the National Apprenticeship Program (NAP).

>>>This blog is based on the recent book: Darvas, P. and Palmer, R. (2014) Demand and Supply of Skills in Ghana: How Can Training Programs Improve Employment?. Washington, DC: World Bank

Peter Darvas is a World Bank Senior Education Economist at the Human Development Department of the Africa Region and is based in Washington, DC. Email: pdarvas@worldbank.org