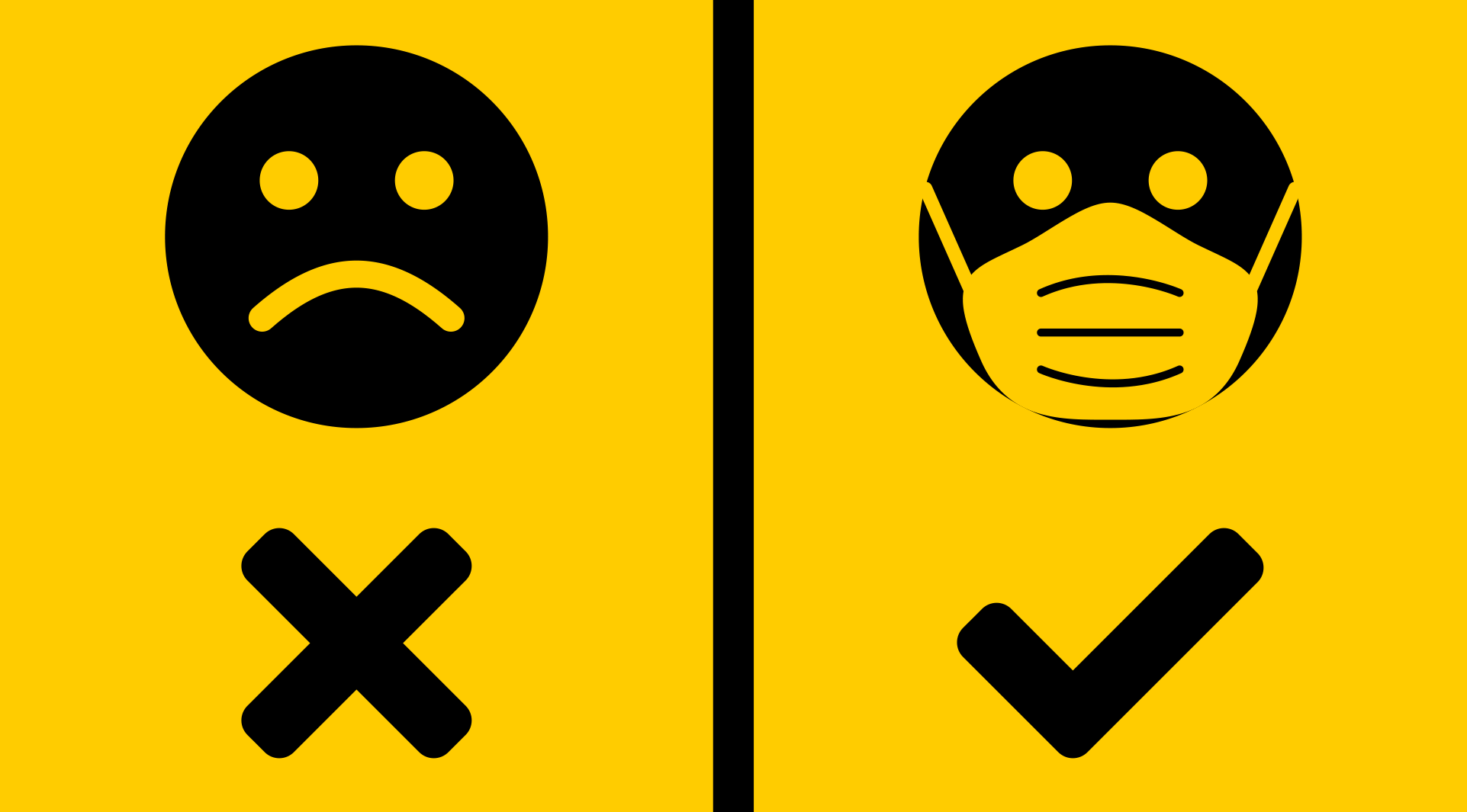 The parallels between the coronavirus pandemic and the climate crisis are at once stark, striking, and unsettling. Both crises have been long predicted and well documented, yet remain largely ignored; both are global in nature, unfolding irrespective of the national borders and hitting the most vulnerable populations the hardest; both require intensive international cooperation in implementing mitigation policies in the context of a highly competitive global economies; both call for immediate action and warn that the impact of inaction would be catastrophic. Unravelling at a much greater speed and affecting everyone everywhere, the coronavirus is just a glimpse into the future of rapidly intensifying pandemics and climate catastrophes that loom on the horizon. As these parallels converge, they lay bare a powerful fact that the world’s fate – and future – are intricately interconnected with everyone else in the world.

The coronavirus pandemic has already demonstrated the tragedy of dismissing our interconnectedness in favor of global competitiveness, economic growth, and overconfidence in (neo)liberal individualism. For example, countries that insisted on prioritizing individual freedoms suffered tragically high infection rates and death tolls from the coronavirus pandemic (e.g., the US and the UK). Individuals in these countries often downplayed and sometimes downright rejected basic public health measures such as wearing facemasks. In the US, the mask itself became a highly politicized symbol of individual rights. By contrast, the pandemic was managed more effectively in countries that prioritized collective action over individual freedoms by not delaying economic shutdowns, mobility restrictions, and social distancing mandates (e.g., Taiwan, Vietnam, South Korea, and China). In these countries, citizens seem to have acted with fuller awareness of others, responding to the pandemic in more collective, interdependent ways.

What has produced such drastically different outcomes? And what can we learn from the current health pandemic experience as we prepare to face the climate crisis? Fully recognizing the complex and multidimensional nature of the problem, we argue that culture must be considered as an integral part of the equation. We suggest and empirically illustrate the possibility that societies operating within a generally interdependent cultural framework are better prepared to respond effectively not only to the current coronavirus pandemic, but also to the looming climate crisis. This perspective allows us to see that our survival – both in the short- and long-term – depends not only on life-saving technoscience solutions, but also on our capacity to make a cultural shift.

Culture, Self, and Survivability

We define culture not as a stable set of beliefs or values stored inside people, but rather as something materialized in patterns of practices and institutions (Adams & Markus, 2004). For example, an individual born in a society develops one’s self through practices in a given society. In this process, the self reproduces and reshapes practices and institutions within that society. This means that culture and self interact with each other in a system of ‘mutual constitution’ or a ‘culture cycle’ (Markus & Kitayama, 2010). Although there are degrees of diversity and difference (and overlap), dominant forms of self-construal generally differ from one culture and/or society to another. In particular, independent self-construal is dominant in individualistic societies (e.g., US, UK, and Australia), whereas interdependent self-construal tends to be dominant in societies without a strong Protestant legacy (e.g., most countries outside Europe and North America).

These different ways of conceptualizing ‘self’ and ‘culture’ have important implications for understanding how societies function and how they respond to different crises. In particular, studies in cultural and environmental psychology suggest that the interdependent self tends to be more concerned about others (Morris & Peng, 1994; Nisbett & Masuda, 2003) and more effective in controlling one’s own desire and behavior for the sake of collective social benefit (Arnocky et al., 2007; Chuang et al., 2016).  In contrast, the independent self is based on the assumption that “the individual is prior to society” and therefore valorizes autonomy and self-reliance. Independent self is therefore more likely to exhibit values and attitudes that undermine collective efforts to address issues of public concern.  Presumably readers will recognize that the Protestant Ethic is – as theorized by Max Weber – the central worldview underpinning Anglo-American-turned-neoliberal capitalism, producing both an economic system and a faith in technical ‘truths’ (e.g., the myth of green tech solutions), which now stand as the biggest obstacles to degrowth and environmental survivability (Hickel, 2020).

Importantly, our recent analyses reveal that cultural dimensions strongly relate not only with people’s environmental attitudes but also with their actual environmental impacts (see Komatsu, Rappleye, and Silova, 2019, 2020). We found that those in countries with strong individualism tended not to accept anthropogenic cause of climate change (Figure 1a) and tended to have great environmental impacts on Earth (Figure 1b). 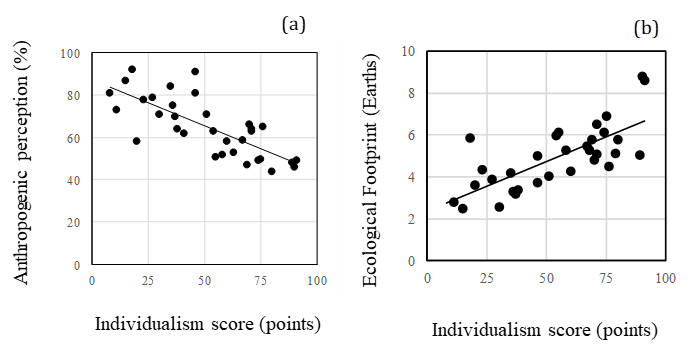 Impact of Culture on the Coronavirus Response

Although our work focused on the impact of culture on environmental impacts, it is plausible to predict a similar impact on the coronavirus pandemic. Our new analysis of the data for Covid-19 cases and deaths suggests that countries with weaker individualism have been more successful in handling the Covid-19 crisis. We primarily focused on the ratio of positive cases to all tested cases, because the number of positive cases per unit population does not always capture the actual significance of the crisis. Our analysis used data for affluent countries with Gross Domestic Production (GDP) per capita more than 40,000 international dollars. Low-income countries often recorded very high percentages of positive cases relative to tested cases possibly due to the lack of resources. Among affluent countries, high percentages (>5%) were observed only for countries with moderate/strong individualism, including the US whose individualism score is 91 (Figure 2a). Much lower percentages were observed for countries with weak individualism (e.g., 0.17% for Hong Kong whose individualism score is 25). 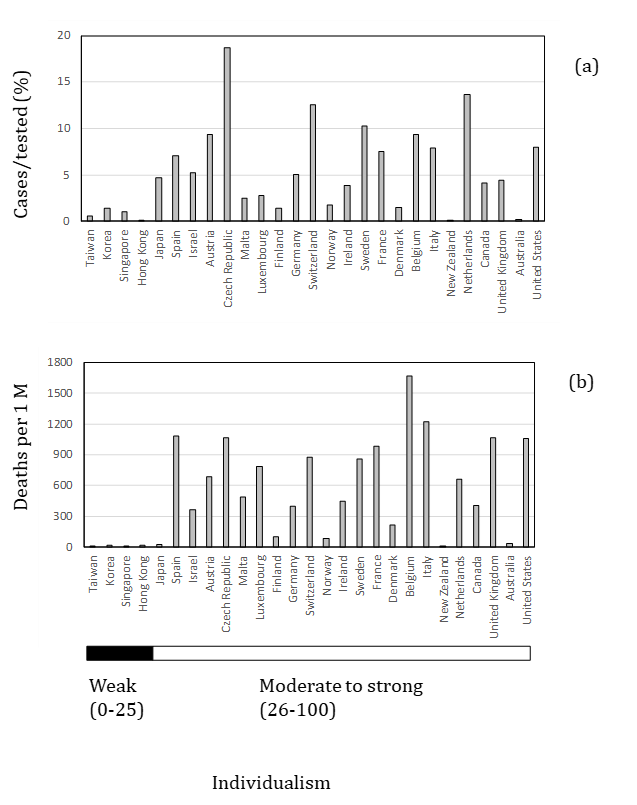 Figure 2. (a) The percentage of positive cases relative to tested cases and (b) the total death per 1 million population for different countries. Data derived from Worldometer (accessed on December 31, 2020).

The Role of Culture for Future Survivability

Although the importance of culture has been long emphasized by thinkers around the world, the empirical elaborations help us to initiate a much-needed discussion among the contemporary academic community, policymakers, and the wider public. We propose to structure this discussion around three major points:

First, there are striking parallels in how different societies respond to the coronavirus pandemic and the climate crisis. The key is an analytical lens that not only includes culture, but differences in culture. These cultural differences could be partially explained by how individual members view themselves in relation to other members, as well as the extent in which they are willing to control their own desires and behaviors for the sake of collective social benefit.  Inevitably the debate is twisted to emphasize independence and freedom, but the antipathy towards, say, wearing masks in the US underscores the absence of a collective outlook.

Second, although the independent self has traditionally been a major cornerstone of Western civilization and proselyted as a key to achieving modernity (Taylor, 1989; see also Komatsu, Rappleye, and Silova, 2019; Rappleye & Komatsu, 2020), the current crises once again call it into question. In fact, both the coronavirus pandemic and the climate catastrophe clearly signal that the most immediate crisis we face is the crisis of (neo)liberal individualism, which not only prioritizes personal freedoms and individual gains above all else, but also undermines support for collective action and coordinated policy intervention. Our survival may well depend on our capacity to make a cultural shift by rearticulating Western modernity’s dominant concept of self (i.e., independent self). This necessarily entails reconfiguring our way of being towards more interdependent, relational approaches. Ultimately, these interdependent relationships extend beyond humans and include the Earth’s broader ecological community. Even if this cultural shift does not reverse or even mitigate the effects of the climate crisis, it will increase the chances of survival for those who remain.

Finally, education is central to making this cultural shift by rearticulating both culture and self. However, to do so “education” itself – as it is currently understood as modern schooling – must undergo a cultural shift. To accomplish this, it is necessary to consider alternatives beyond the familiar Western education paradigm (Silova, Rappleye, & Auld, 2020; see also Common Worlds Research Collective, 2020). Often denigrated, discarded, deficit-ized or simply forgotten in the rush to modernize along Western lines, these alternatives can help us reconfigure our thinking – and being – in new ways.  At least in our view, the ever-growing gap in coronavirus deaths between individualistic and interdependent contexts appears as portent for the cataclysm of climate change.

About the authors:  Iveta Silova is Professor and Director of the Center for Advanced Studies in Global Education at Arizona State University. Her recent research examines the intersections of education, childhood memories, ecofeminism, and environmental sustainability. Hikaru Komatsu is an Associate Professor at National Taiwan University, International Degree Program in Climate Change and Sustainable Development. His recent work has focused on the relationship between culture, education, and sustainability. Jeremy Rappleye is an Associate Professor at Kyoto University, Graduate School of Education. His recent work has focused on building the basis for a transcultural and transdisciplinary conversation on education, social science, and philosophy. Recent papers include Towards (Comparative) Education for a Finite Future(with Hikaru Komatsu) and Beyond the Western Horizon (with Iveta Silova and Euan Auld).