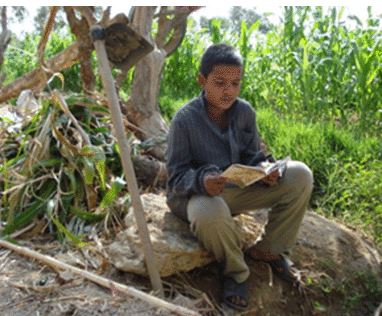 As a researcher in literacy, gender and development, I was excited to have the opportunity to collaborate on a project that aimed to bring together policy makers, practitioners and researchers working on adult basic education, technical and vocational education and training (TVET) and agricultural development. These sectors are so obviously inter-connected in people’s lives and livelihoods, and yet researchers and policy makers in these fields often work in isolation from each other. Within the education sector alone, gaps in understanding, communication and conflicting policy priorities have developed between schooling and other forms of education; between adult literacy and other kinds of adult education (particularly vocational skill development); and between programmes for children and adults.

The IFAD-UNESCO project, ‘Learning knowledge and skills for agriculture and rural livelihoods’, set out to develop a more holistic analysis by researching how young people learn different kinds of knowledge, skills and strategies to enhance their livelihoods in rural areas. Rather than using training programmes and educational institutions as an entry point, the study adopted a ‘bottom-up’ approach to researching how informal, non-formal and formal learning is taking place in the everyday lives of young people. Research teams in Cambodia, Egypt and Ethiopia conducted ethnographic observation, focus group discussions and life history interviews in two contrasting rural communities. They explored how young people viewed their learning experiences (education in the widest sense – not just schooling), agricultural livelihoods and their aspirations for the future. They analysed this data in relation to case studies of skill providers in these communities and interviews with older women and men – to gain insights into intergenerational learning and understanding of changing social values and livelihood strategies. As Global Research Co-ordinator on the project, my role included supporting the country research teams through a review of the international literature and training in qualitative methods, and developing a comparative analysis across the three country contexts.

Having worked for several years in rural communities in Western Nepal, I have seen how young people dreamed of a future beyond the family land and subsistence farming. As roads, mobile phones and the internet have reached even remote mountain villages, I have witnessed the growing numbers of young women and men leaving for education and work in Kathmandu and the Gulf countries. So I guessed that the situation in our research sites in Cambodia, Egypt and Ethiopia would be similar. As much previous research has pointed out, young people often see farming as an occupation of ‘last resort’. In a sense, challenging our own assumptions as researchers was the first step on this project – how to suspend beliefs (particularly since many of the country research teams were originally from subsistence farming backgrounds) that young people would be better off in occupations away from agriculture and their rural communities. At our first workshop with stakeholders in Ethiopia, there was heated debate about whether the IFAD-UNESCO project was trying to ‘brainwash’ young people into staying in family farming.

As the field research progressed, the young people’s views and experiences from these very different contexts made us realise the complexity of the relationship between learning, agriculture and social change. Young people not only talked about their livelihoods in terms of ‘farming’ or ‘other’ in their accounts of their lives. Rather, they emphasised that farming was a ‘given’ within many different livelihood activities and roles over the course of their lives and that there were strong inter-connections between off-farm and on-farm work. For instance, a college student in Fayoum (Egypt) related how he returned to help the family with farming during holidays in order to support his studies. There were striking differences between the different country contexts in terms of how young people viewed agricultural work. In Siem Reap (Cambodia), some young women talked about the appeal of working in a factory rather than the farm as it offered a social space and chance to meet their future spouses, as well as gaining confidence through this interaction. In Gemi (Egypt), young women expressed great affection for the land and yearned to own their own piece of land for growing food for the family. In Basona (Ethiopia), the team interviewed several divorced young women who had moved to the town to make and sell alcohol. Although now independent of their families, they were dependent on traders and employment agencies that made them susceptible to abuse and exploitation.

So where did learning fit into this complex picture of rapidly changing and multiple rural livelihoods? As a young man in the Ethiopian study commented, ‘learning agricultural knowledge and skills is not a question of choice, we learned it because it is a way of life, where we are born from’. The findings revealed much about informal learning in these communities, such as how young people learned agricultural practices from their families. An older pastoralist woman in Yabello (Ethiopia) explained how young children would learn to look after one or two small calves at the age of 7, then move onto a larger herd at age 8, and she explained what they would learn – where water and fodder is available in which season, alertness, physical endurance to travel to distant places and fight with wild animals. New skills and technologies were also learned informally. Young people related how they had learned to use mobile phones through help from friends – even those who could not read and write had developed visual strategies to recognise incoming and outgoing calls.

Formal schooling is now a possibility for many young people in these communities – in contrast to their parents’ generation, some of whom saw schooling as a threat to traditional agricultural livelihoods, not least in terms of the financial burden and loss of labour within the family. Although young people did not expect to learn useful knowledge and skills directly relevant to agriculture in school, they emphasised the symbolic status of schooling, the confidence gained through being literate and an educated person. Young farmers commented that they had been excluded from agricultural extension programmes or training institutes due to the entry criteria: whether due to lacking educational qualifications or literacy skills or needing to own their own land. In Siem Reap (Cambodia), young women farmers explained how they turned to fertiliser traders to help them with technical advice on their crops. There were also instances of farmers learning informally from neighbours who had been included in training programmes, or by watching extension workers demonstrate new inputs to other farmers. In all the contrasting field sites, insights emerged into the ways in which informal learning supports and complements formal learning, particularly in terms of the wide range of ‘soft’ skills learned.

The project points to the need for researchers and policy makers to give greater attention to the extent and value of informal learning. The findings also provide strong evidence of young people’s diverse experiences and aspirations – challenging the one-size-fits-all approach in many educational programmes (whether adult literacy or agricultural skills development) and targeting youth as a homogeneous group.  Above all, as a team of educational and agricultural specialists, we learned the importance of moving outside our research and policy ‘silos’ to share assumptions and understandings of learning in these different sectors.

Anna Robinson-Pant is a Professor of Education and the Director of the Centre for Applied Research in Education (CARE) at the University of East Anglia. She is also the Global Research Co-ordinator on the IFAD-UNESCO project ‘Learning knowledge and skills for agriculture to improve rural livelihoods’.