NORRAG is finally taking the plunge into the brave new world of the blog-pool. We hope it will help to fill the six months’ gaps between our regular special issues of NORRAG News, and engage our 4000 members with some more of the rapidly changing debates in international education and training. 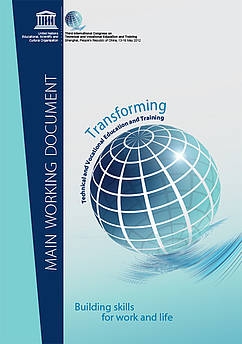 And what better occasion than the shadow of the 3rd Congress on TVET to launch a NORRAG blog since NORRAG was quite visible there (see below). But what can we expect from a world congress these days, and especially one on TVET?

Here, first, are this one’s vital statistics. Hosted by the Ministry of Education of the People’s Republic of China. Almost 1000 participants, with 200 from China and 800 from outside. The great majority of the almost 120 national delegations were drawn from Ministries of Education, – unsurprisingly, as this conference was convened by UNESCO Paris. TVET is located, however, not just in schools, but in training centres (public and private), in services (health, administration) industries (formal and informal), as well as in agriculture; but there were only some twenty-five participants from Ministries of Labour, and only four from industry (including from Microsoft), and just two from trade unions. So the Shanghai lens on TVET was primarily via schools and formal education.

Even so, what were the key messages and the key words from Shanghai? Above all, it was TRANSFORMATION of TVET!

Readers can check out the Main working document for the conference, just twenty pages long, to see what the red threads of TVET’s transformation are. Appropriately perhaps, it is not a naïve vision, but one of considerable complexity.

Sadly, there is no typology or matrix offered that would help to map these multiple uses of the English word “skills” against the multiple locations (formal, nonformal and informal) where skills are acquired, perhaps utilised, and even transformed. It gets even more difficult when some other languages are used. How are policy makers to know what skills should be prioritised?

Intriguingly, though “skills development” is increasingly being used to cover skills acquisition in and beyond schools, the term is scarcely used in the Main working document, while TVET is used 351 times in twenty pages! It would have been useful in a sentence to say why!

Another thing that is in critically short supply is research on TVET according to the document.

in many countries and internationally there is limited availability of TVET data and research, and management information systems for TVET are not always in place. Even getting basic TVET data and ensuring their accuracy is beyond the capacity of some systems, and the abilities to disaggregate for target groups, to compare public and private TVET provision or to do any forecasting are beyond the horizon for several countries. (Main Working Document, 2012: 22-23)

This is one of the reasons that NORRAG organised a round table at the Shanghai Congress on Bridging Research and Policy Development in TVET, with inputs from East Asia, Europe and Africa. It is clear that the scarcity of academic and policy research on TVET is directly related to the low status of TVET. Thus there will only be a transformation of the TVET research environment where there are high status TVET systems, as in Germany, Austria, Switzerland, Brazil, China etc. etc.

NORRAG also organised at the Shanghai Congress a three hour brainstorming session which looked critically at: Beyond 2015: Perspectives for the role of TVET and skills development in the future international development agenda. With the mass of debates about the construction of the post-2015 agenda, it is vital that a case is made for carrying forward the new-found role of TVET in such an agenda, perhaps in relation to work and youth employment policies. Readers should note that the final Shanghai Consensus document argues strongly for VET to be considered in the post-2015 international agenda.

NORRAG blog readers who wish to have different views of the Main working document may wish to read what  two other NORRAG members with deep experience of TVET, Claudio de Moura Castro (Brazil) and Santosh Mehrotra (India), have to say about it (along with my own views).

But readers should also know that behind the Shanghai Congress and the Main working document there is a much longer (300 page) draft of the World TVET Report which has not yet been released but the most recent draft is conceptually very challenging. Arguably, its core message about transformation is the need for the re-conceptualisation and re-theorisation of TVET. Hopefully, it will appear around October 2012.

October 2012, therefore, will have rich pickings for NORRAG’s TVET watchers. The Global Monitoring Report on Skills will be published on 16th October 2012. Together with the World TVET Report, they will be analysed along with other approaches to skills world-wide (e.g. World Bank, EU, ADB, ILO etc) in a special issue of NORRAG News in November 2012.