By Velibor Jakovleski, NORRAG and the Graduate Institute, Geneva. 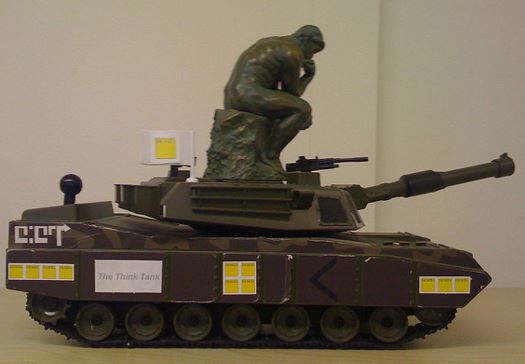 Gone are the days when the main sites of knowledge production were universities and specialized government agencies. Technological advances, together with the increasing reliance on data to inform policy-making, have resulted in an almost industrial production of research. Since the 1960s and 1970s in particular, the think tank has proliferated and become a more important aspect of that industry.[1]

Think tanks have been defined as “non-governmental institutions; intellectually, organizationally and financially autonomous from government, political parties or organized interests; and set up with the aim of influencing policy.”[2] The definition sets a relatively high threshold for autonomy, but in reality the dividing lines between think tanks on the one hand and government, business, or academia on the other, is not always so clear.

Think tanks like Brookings might be labeled as “independent” based on their financial autonomy and ability to set their own research agenda. Others like the African Leadership Centre – a joint initiative of King’s College London and the University of Nairobi – are organisations that can be classified as university-affiliated. USA-based Mathematica Policy Research, on the other hand, is a for-profit corporation that undertakes education research and provides data collection services to clients. Others conduct research with obvious ties to the state, as is the case with the National Institute for Educational Policy Research in Japan. All are set up with the aim to influence policy, but they differ in organisational form.

While there might not be consensus on what a think tank is, they can all be described as organisations which combine policy research and advocacy with the objective of informing policy. They can be relatively autonomous, or they might have ties to – or explicitly serve the interests of – a government, a political party, business, or university.

The field of education has not been impervious to the proliferation of think tanks, their various organisational forms and their sometimes uncertain influence on the policy process. Declining public expenditure on education has led to the outsourcing of policy-orientated research on education. And the increasing focus on demonstrating and evaluating education outcomes has also resulted in an expansion of research on education-related matters.

In an attempt to make sense of this relatively recent trend in education, NORRAG has conducted a preliminary mapping of think tanks in the field, finding 133 organisations around the world that undertake research and advocacy with the objective to somehow shape education policy.[3] Based on information provided on their websites, education think tanks were classified according to geographic region and organizational type (independent, associated with a government, university-affiliated, or for profit businesses).[4] 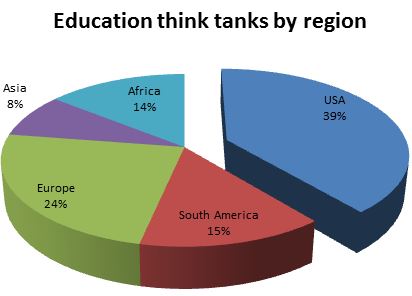 The modern education think tank is rather concentrated geographically – a notable 39% of all education-related think tank work is being done in one country: the United States. The finding is consistent with the view that think tanks are essentially a post-1945 American phenomenon.[5]

Moreover, 71% are self-reported as “independent” organisations, with 16% operating as research institutes at universities, and only 9% associated with a national government. Again we see parallels with the general trend: the majority of policy research and advocacy conducted by think tanks is done by private and independent organisations. 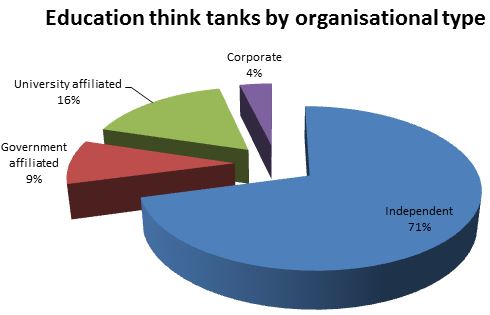 While organisational autonomy is good for producing good research, it does not guarantee it. In fact, quite the opposite can also be true, as a lack of oversight and peer scrutiny can result in biased work that might advocate for special interests. Some have even directly critiqued the “scientific” basis of the research produced by education-orientated think tanks as nothing more than work that is “slickly produced yet ideologically driven”.[6]

Hence the emerging problem: an increasing reliance on think tanks to inform education policies without assurances that their work is sound and unbiased. With the global spread of think tanks likely to continue, the question then becomes how to keep think tanks accountable?

Out of that concern, the aptly named Think Twice Think Tank Review Project – based out of the National Education Policy Center at the University of Colorado – has been providing expert third-party reviews of selected think tank publications since 2006. This year alone the project has conducted seven reviews of education-based reports by major think tanks like the Manhattan Institute, RAND, and Centre for American Progress.[7] In each case, reviewers found either methodological issues or unfounded conclusions based on the evidence presented.

As sources of some of our fundamental public policies, think tanks play a growing role in today’s market for ideas. In that context, it’s all the more important to be aware from where our policy ideas come before we consume them. We like knowing where our fruits and vegetables come from, and whether they’ve been sprayed with chemicals. Why should we be less interested if our education policies are “Made at the Cato Institute” or if they’ve been sprayed over by a slick advocacy campaign?

It’s important to place think tanks on the education scene and recognize their potential to impact policy. The next step is a more difficult one, determining to what extent their work is actually related to specific education policy outcomes.

[3] NORRAG is not claiming that this is a definitive list, and some think-tanks will have been missed (if that’s your organisation, please get in touch !). As a point of reference, one of the most referenced projects on think tanks lists only 65 education think tanks in their latest report.

[4] The next phase of NORRAG’s review of international education think tanks will explore the ideological slant of think tanks and attempt to measure their influence on policy outcomes.

[7] The Project’s reviews can be found at: http://nepc.colorado.edu/think-tank-reviews

Velibor Jakovleski is a Programme Officer for the Programme for the Study of International Governance at the Graduate Institute in Geneva, Switzerland. He is also a Research & Project Officer for NORRAG. Email: velibor.jakovleski@graduateinstitute.ch

>> View all NORRAG Blogs on related topics: data and governance