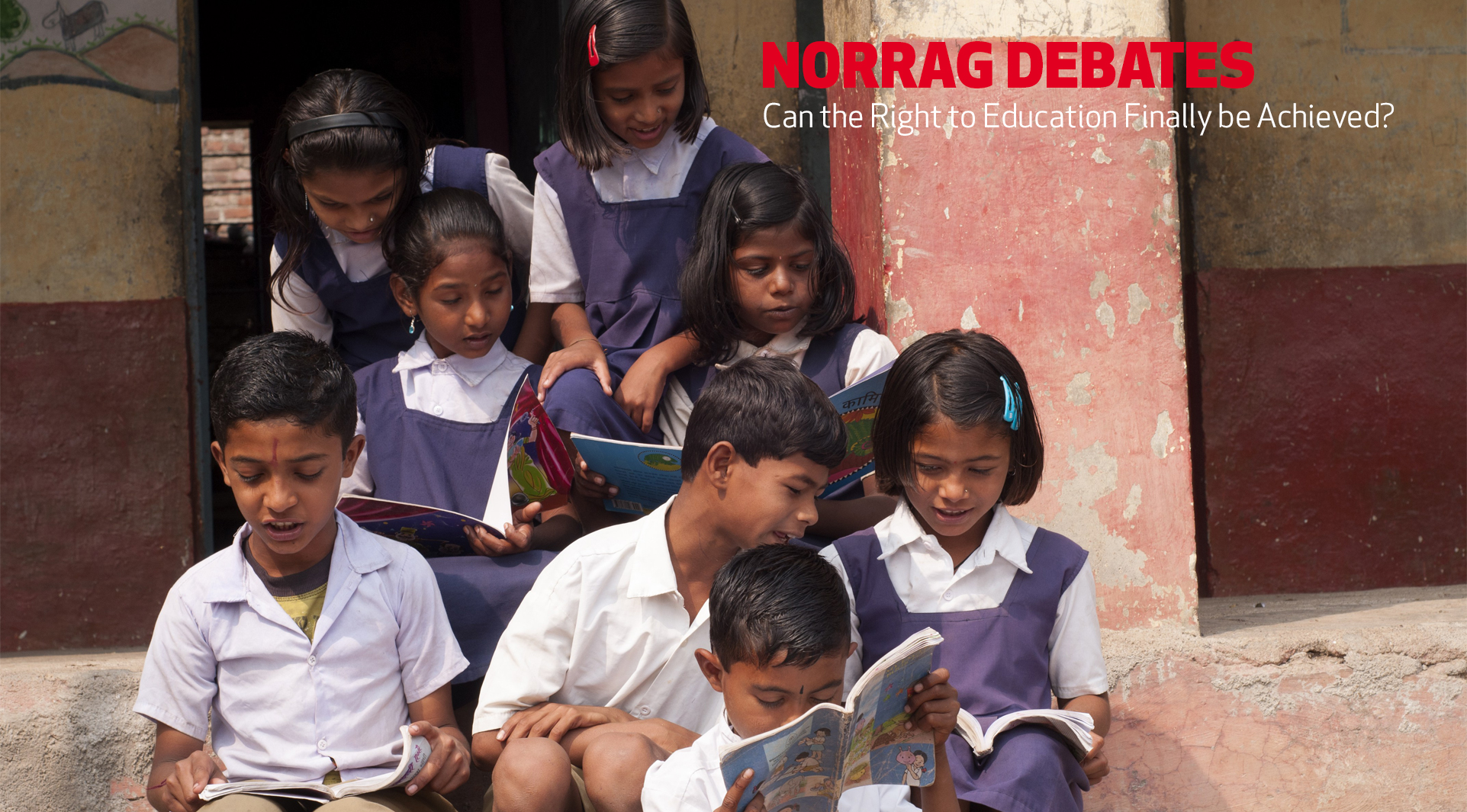 This blog is part of the NORRAG Debates stream on the Right to Education, and follows on from the recent publication of NORRAG Special Issue 01, “The Right to Education Movements and Policies: Promises and Realities,” of which Archana Mehendale and Rahul Mukhopadhyay were guest editors. Archana Mehendale is a Professor at the Centre for Education, Innovation and Action Research at the Tata Institute of Social Sciences in Mumbai, India, and a Programme Lecturer, MASCR, at the University of Geneva. Rahul Mukhopadhyay is a visiting faculty member with the School of Education, Azim Premji University of Bengaluru, India.

The NORRAG Special Issue 01 (NSI 01) is devoted to the Right to Education (RTE) movement and brings together a rich and insightful collection of articles from researchers, practitioners and policy experts across the world. The Special Issue opens with a set of four introductory articles that present the landscape of normative and legal frameworks on the right to education, highlighting key opportunities and challenges before the international community. The UN Special Rapporteur on the Right to Education, Koumbou Boly Barry, underlines the significant progress made by the international community towards education for all since the Universal Declaration of Human Rights in 1948, now reinforced in the Sustainable Development Goals (SDGs). She also emphasises the need to address the entire spectrum of human rights, given that equitable and quality education is still not accessible to a large section of the world’s population. This section also includes a contribution from Anjela Taneja, who draws attention to the slow progress made on SDG 4 and suggests the need to address inadequate financing, weak and diffused accountability and lack of formal linkages between SDG review processes and treaty bodies; an article by Jordan Naidoo and Delphine Santini which shares rich findings from an 11-country study which analysed the extent to which national legal provisions were aligned with and helped achieve SDG 4 and  targets 4.1, 4.2 and 4.5; and one by Delphine Dorsi and Erica Murphy which is based primarily on case law and shows how courts have progressively interpreted the right to education and held states accountable for delivering on their duties.

NSI 01 then delves into five important themes related to the right to education: history and perspectives; tangible implementation and progress; the role of institutional actors such as the government, non-government and community; private actors and privatisation; and specific interest groups in fragile contexts. The first of the eight contributions on history and perspectives, by Borhene Chakroun and Katrien Daelman, reminds us that the right to education is not limited to the right to schooling but also extends to the right to life-long learning. Former Special Rapporteur Kishore Singh then talks about the values crisis in education and the need to preserve the humanist mission of education by reinforcing human values. The next two, by Nalini Juneja and Krishna Kumar respectively, walk us through a brief history of the making of the RTE movement in India and the departure from its colonial avatar, and then the current challenges faced in the form of the quasi-federal nature of the Indian state and its contradictory impulses, the complex recent history of large-scale educational programmes and the emergence of strong neo-financial concerns in educational policy making. Both Salim Vally and Vikas Maniar underscore the need for educational options suitable for the local social–economic–cultural milieu with case studies from South Africa, and point out the tension inherent in market-based solutions intended to remedy the challenges in realizing the RTE and persisting structural inequalities. Jun Li focuses on China’s historical experience with the RTE and the benefits reaped through the pragmatic Zhong-Yong model for educational development. Monisha Bajaj stresses the importance of moving the human rights education agenda from that of only ensuring a conducive and non-discriminatory learning environment to one of transformative human rights in order to address larger questions of power and structural inequalities.

Building on this historical perspective, five contributions engage with the challenges encountered in implementation and the role of judicial and legal systems in overcoming these challenges. Two articles from Brazil, one by Michelle Morais de Sa e Silva, and the other by Lucélia Bassalo, Wivian Weller and Sinara Zardo, highlight the widespread reductions of poverty and improvements in educational opportunities through conditional cash transfers, and the progress made in addressing issues of disability and ethnic and gender diversity through earlier educational policies. Recent conservative trends and counter-movements to these achievements are also underlined. Both Nina Ranieri and Faranaaz Veriava elaborate on the role that autonomous public institutions and civil society organisations have been able to play to influence jurisprudence towards a more substantive approach to RTE through legal and extrajudicial mechanisms, in Brazil and South Africa respectively. The section culminates with two contributions from India, by Praveen Jha and Annie Namala, discussing how inadequate resources, both financial and institutional, could affect the implementation of broader RTE commitments and equity goals.

Experiences of collaboration and participation of different institutional actors—government, non-government and community—that have propelled the RTE movement across diverse contexts are brought together in a separate section which contains seven contributions mainly from Brazil, India and South Africa.  Articles describe the works of diverse actors, including the Brazilian Government Agency for Law Enforcement and advocacy organisations such as All for Education in Brazil written by Priscila Cruz and Olavo Nogueira Filho, the National Commission for Protection of Child Rights in India by Shantha Sinha, the state-level federations of school-level community structures in India by V.P. Niranjanaradhya, Shruthi Raman and B.S. Krithika, and the work of Equal Education in South Africa written by Crain Soudien and Andrea Juan. The need for collaboration among multiple stakeholders—development agencies, national governments, and public and private donors—in the international arena is aptly exemplified in the contribution from Education Cannot Wait. A cautionary note to such arrangements is emphasised by Arathi Sriprakash and R. Maithreyi, who describe how problematic conceptualisations of parental participation in the context of the RTE Act in India could lead to ignoring structural inequalities and local power hierarchies.

Six more contributors engage with another category of key institutional player—private actors. The normative implications and implementation challenges raised by involvement of private actors, to serve contesting rights such as parental choice and equitable education, is discussed by Sylvain Aubry through the efforts of Global Initiative for Economic Social and Cultural Rights. The specific nature of these conflicting claims are then amply illustrated in a set of 5 contributions from India. A much debated provision of the RTE Act in India that requires private schools to admit students from marginalised populations is discussed both by Sudhir Krishnaswamy and Prateeti Prasad and by Ankur Sarin and Ashish Ranjan, though the authors highlight different sets of concerns. The former discusses the tensions that emerge between the inclusionary potential of this provision and the concerns arising from an expanded role of the private sector in school education, while the latter point to the failure of the state to inform the rights-holders of their entitlements and the role played by other actors in its stead. Two more articles, by Carol Anne Spreen and Sangeeta Kamat and by Geetha Nambissan, look at the expansion of low-fee private schools, edu-businesses, affordable learning models and public-private partnerships in education in the Indian school education. The contributions emphasise how these options accentuate unequal outcomes for privileged and marginalised groups in a segregated school system and also lead to the de-professionalisation of the work of teachers. Regulatory concerns around these issues, such as the lack of state capacity to regulate and monitor private schools and the ability of private schools to circumvent policy provisions, are discussed by Shruti Ambast.

The final thematic section of NSI 01 brings together six contributions covering right to education in fragile contexts and efforts that are needed for the realization of the RTE in these social geographies. Contributions in this section include street children in Brazil, by Irene Rizzini and Tamo Chattopadhay; refugee groups, discussed both by Sarah Dryden-Peterson and by collaboration from Mary Mendenhall, Garnett Russell and Elizabeth Buckner; Roma in Europe, by Tünde Kovács Cerović; mobile pastoralists in India, by Caroline Dyer; and the Inuit in Canada, by Tatiana Garakani. This set of contributions highlights the importance of integrative strategies—political, economic and developmental, and the need to align these strategies to context-specific educational and developmental requirements of different minority groups.

The rich set of contributions to NSI 01, on the one hand, highlights broad concerns such as inadequate funding within nation-states and from the international community, persistence of both historical and new forms of inequalities, and inadequate efforts to provide for a more integrated system of education for all at both national and international levels that affects the progress towards realising right to education. These have implications for education quality, beyond mere basic infrastructural provisioning, to student learning and well-being. On the other hand, the issue also brings forward far-reaching changes to the progressive realisation of the RTE through judicial interventions, autonomous public institutions and civil society organisations, which often work in collaboration with each other.