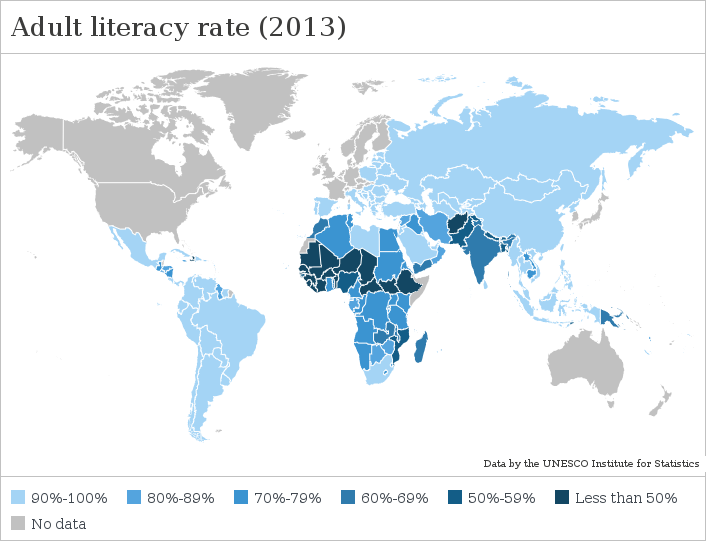 International Literacy Day is an occasion to celebrate the commitment of individuals and organizations striving to ensure that everyone has the skills needed to engage with the world. It is also a day of reckoning, with new data from the UNESCO Institute for Statistics (UIS) showing that 757 million adults, including 115 million young people between the ages of 15 and 24, still cannot even read or write a simple sentence.

These new estimates underscore the challenges ahead as the international community pledges to “ensure that all youth and a substantial proportion of adults, both men and women, achieve literacy and numeracy” by 2030 as part of the Sustainable Development Goals (SDGs). Activists fought hard for this ambitious target, which we fully support. But the battle has just begun to bring about a paradigm shift in policymaking and measurement.

As a first step, we can set a baseline for action based on existing data while charting a course towards the next generation of statistics. The UNESCO eAtlas of Literacy presents a series of interactive maps and charts to help evaluate the progress made since 2000, when the world first set an international literacy target for 2015, and the challenges of reaching the new SDG target by 2030.

How far have we come and how far to go?

2015 is the deadline by which the international community pledged to reduce adult illiteracy rates by 50% compared to 2000 levels as part of the Education for All goals. Yet according to UIS projections, most countries have missed the deadline.

Despite a general rise in literacy rates between 2000 and 2015, only 39 countries will probably reach the target and another 24 countries are within one percentage point of the target. Most countries projected to reach the target are from the Arab States, Central and Eastern Europe, Central Asia, as well as East Asia and the Pacific. However, all of these regions also include countries that are likely to miss the target.

The data show that nearly all countries that reached or are within reach of the target had adult literacy rates greater than 80% in 2000. 33 countries with data, nearly all from sub-Saharan Africa, are likely to miss the EFA target by 10 percentage points or more.

Slightly more than one-half of the global illiterate population lives in South and West Asia, which is followed by 25% in sub-Saharan Africa, 12% in East Asia and the Pacific, 7% in the Arab States and 4% in Latin America and the Caribbean. It is estimated that less than 1% of the global illiterate population live in the remaining regions combined.

In general, youth literacy rates (for the population aged 15 to 24 years) are higher than adult literacy rates, reflecting increased access to schooling among younger generations. While the global youth literacy rate has risen steadily to reach 90%, the regional rates remain low in sub-Saharan Africa (70%) and South and West Asia (84%).

Two out three illiterate people are women – one generation after another

Women account for two-thirds of all illiterate adults (63%), and the gap is nearly as wide among youth. Young women make up 59% of the 115 million illiterate youth. So despite steady improvements in literacy rates, women are still the first to be deprived of these core learning skills from one generation to the next.

The gender gap is widest in South and West Asia and sub-Saharan Africa, where women aged 15 years and older are 24% less likely to be literate than men in the same age group. Barriers against women also persist in the Arab States, with the female adult literacy rate at 70% compared to 86% for males.

The next generation of literacy data

The new literacy target demands a new global measurement approach not just to monitor progress but, even more importantly, to support policymaking at the country level. The international community is working to develop the tools and data needed by countries to accurately assess literacy skills and use this information to better target initiatives and resources to those with the greatest needs.

The International Adult Literacy Survey (IALS) and the Adult Literacy and Lifeskills survey (ALL) were first attempts to this end in the 1990s. The Program for International Assessment of Adult Competency (PIAAC) and the Skills Toward Employment and Productivity (STEP) provide the latest generation of assessment tools and PIAAC now allows anyone to test their own skills. These programs, which are technically rigorous and respected,  are designed to measure high level skills commonly associated with enriched environments as opposed to the basic literacy skills of adults and youth in many countries, especially the least developed, where access to quality education remains limited.

The Literacy Assessment and Monitoring Program (LAMP), developed by the UIS focuses on more basic levels of literacy skills. However, field tests have shown limitations, especially in the measurement of the lowest end of the literacy scale and the need to critically address cultural differences.

We can learn from current and past experiences to develop simpler adult literacy assessments that can be linked to existing international initiatives and address both the demand for and supply of skills specific to each country. By providing a comprehensive perspective on the full range of skill levels within a national population, the data can then be used to ensure that different groups (by geographic region, socio-economic status, ethnicity, etc.), can access the support and training they need while fostering partnerships between the public and private sectors and a sense of collective responsibility to improve the skills and employment opportunities of individuals.

This new approach will require considerable investment, but those will be tiny compared with their returns in the form of better and more targeted policies.

This blog first appeared on the Global Partnership for Education Blog on 8th September 2015 (4:30 EST) and is re-posted with agreement.

Silvia Montoya (@montoya_sil) is the Director of the UNESCO Institute for Statistics. Andreas Schleicher is Director for the Directorate of Education and Skills at the OECD. Email: Andreas.Schleicher@oecd.org