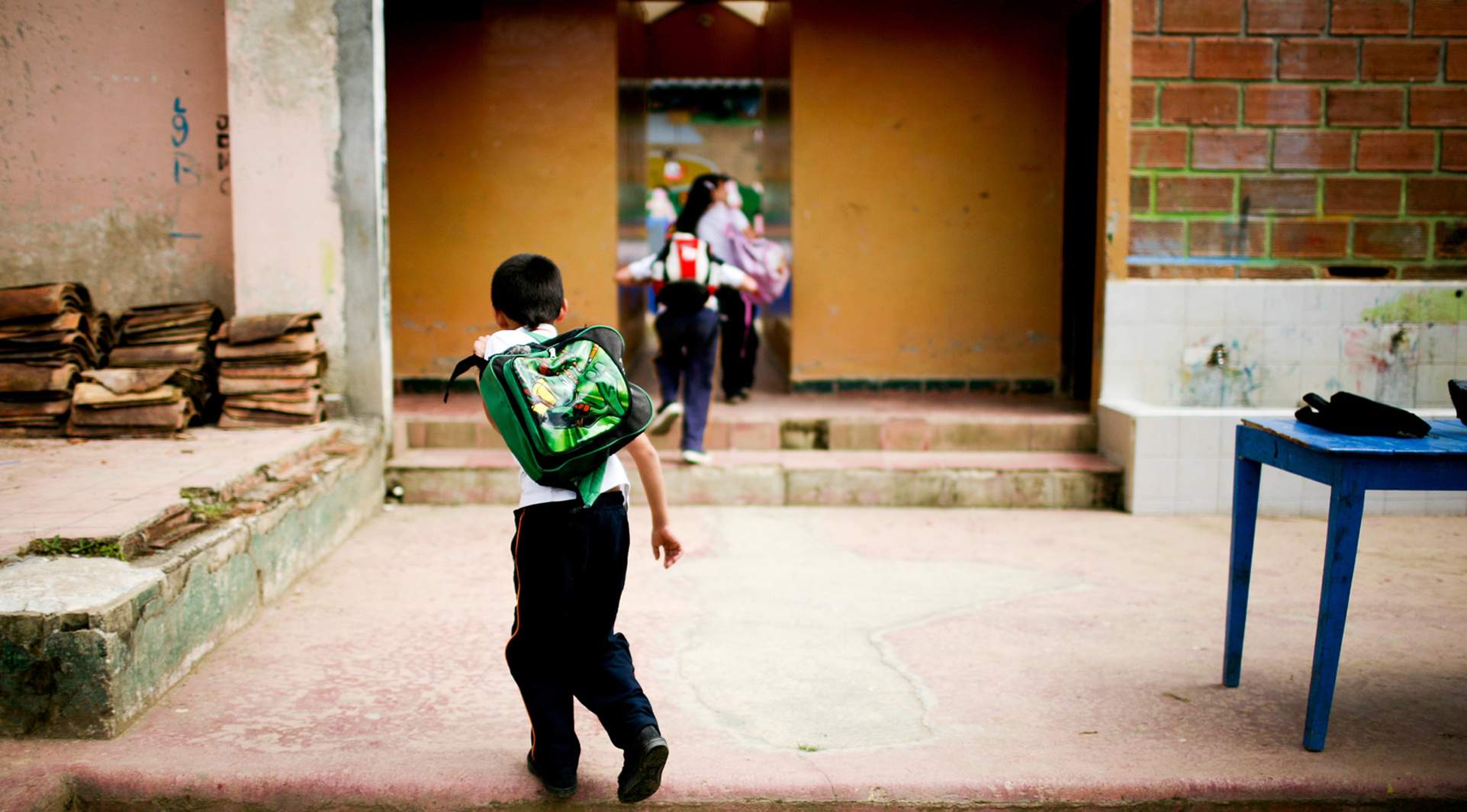 In this blog post, part of the NORRAG Blog Series on the Role of Quality Education in Building Just and Sustainable Peace, Dr Yesid Paez, Lecturer in Education at Bath Spa University, reflects on the role of the school and education in the context of war and conflict. Drawing from examples of rural areas in Putumayo, Colombia, where schoolteachers, tired of the war on drugs, have devised strategies to reflect and address the conflict together with the community and the wider society, Dr Paez highlights that quality education has the potential to contribute to building societies free from violence and conflict.

In contexts of war, the school becomes a place where the conflict unfolds in the everyday, where children and young people often bring their experiences of violence, isolation, and fear. Their language and interactions are deeply influenced by the outside socio-political and economic issues, which makes the school a micro-cosmos, a representation of what happens beyond the walls of the institution. Children’s way of navigating the social world is mediated by the war. In these contexts, the school – and other forms of education – face an enormous challenge: to build up possibilities of transformation through pedagogies that counteract the logics of the war. It is in this social landscape where there exists potential for social change. The potential of quality education that is culturally responsive, connecting the experience and context of the community (and wider society) with contextually relevant content and pedagogy that can contribute to building just and sustainable peace, has the potential to create such social change.

The starting point in quality education in the context of war is observation and dialogue (Gill, 2014; Freire, 2017). Through observing the reality of pupils, their languages, manners, their family and community experience, and views of the world, educators also observe their own reality and challenges in the face of conflict. Then, they can establish a powerful connection with their learners, which constitutes a pedagogical act, where human fellows – teachers/education agents and learners – encounter and reflect on their experiences and interrogate reality in a co-constructed task. To do so, schools need to create spaces for dialogue in the face of adversity. This has been the experience of rural areas in Putumayo, Colombia where schools, libraries, and social movements have come together as communities tired of the war and have struggled for new meanings, which involves the return to and affirmation of humanity (Freire, 2017). In the tiredness and sense of hopelessness new options emerge. This has the potential to reduce conflict as it acquires new languages and forms of being dealt with. The experience in some communities in Colombia highlights this. For instance, local libraries in conflict zones have come up with initiatives such as magazines, intergenerational activities in different spaces, e, g., reading, crafting, and games. There is also an integration with other institutions and individuals that contribute to enrich visions of society and peace, e. g., schools, universities, writers, local NGOs, and volunteers. Women’s association have worked together with state institutions and NGOs to run workshops, work on audio-visual material (e.g., memory), and reduce gender violence as well as created entrepreneurial initiatives that counteract gender imbalances within the communities.

Schools should be a place where educators make sense of the circumstances together, which implies that differences are welcome, and some common ground is found. When educators share their practices and exchange ideas, there are opportunities to work together towards the dismantling of logics of violence aiming at futures where dialogue is an instrument to construct social possibilities. The search for meaning is materialised in concrete strategies where people – including children and young people – have a voice. This is the first radical change because war imposes silence, fear, and inaction. Storytelling, drawing, sports, theatre, radio, environmental initiatives, and others become a many-voice tool. The recognition of the other as a person – be it armed actors, adults, children, and therefore fully capable of expression and action is what allows for creative and collective initiatives that restore the sense of individual dignity and that of others. For example, a radio programme – whether at school or outside of it – is a tool where people express their concerns about the wellbeing of the community, weave networks of solidarity and synergy while having entertainment, which aligns with an emancipatory agenda –i.e., it proposes entertainment to subvert violence. Likewise, in Putumayo, Colombia, schoolteachers have come up with initiatives to reflect on the conflict and its environmental implications. Creative writing is another tool that can be a powerful and healing way of dealing with the anxieties of the conflict inside and outside schools, allowing for diverse forms of expression (e.g., a magazine). What is more, once people start to use their voice, new ‘forms of existing’ come to life.

Another radical aspect of contextually relevant, quality education is the formation of modalities of non-discrimination. Education sites like the school and local libraries have the potential to be places of inclusion, where no one is rejected. Children and young people, and adults, have the right to be listened to, talked to, and respected, which contradicts the exclusion and silence imposed by war. For example, female students expressing their dissatisfaction at teachers treating male students differently in a radio programme during a school break is a way of positioning themselves openly and creatively (Zuleta, 2021). Here, diversity in all its forms – religion, sexual orientation, gender, political views, ethnicity      and so on – become valued and embraced. The combination of respect for diversity and new forms of expression provides new ways of being in the social world and, at the same time, to think of possible new worlds, free from violence and conflict.

This type of exchange contributes to new versions of these communities where the precarities of war – silence, fear, mistrust, environmental degradation – are replaced by expression, acceptance of the other(s), social trust, and initiatives that protect the environment. For example, in Putumayo, Colombia, some schoolteachers and students have created theatre companies and travelled to other regions; through theatre they have created new narratives about themselves and the experience of conflict (Santacruz, 2014). Others have come up with environmental initiatives that engage with parents and the wider school community or think of eco-friendly touristic projects in which students promote forms of enjoying the environment while protecting and learning about natural resources. Thus, this dynamic exchange and constant learning become the new normal in which people continuously rehearse their capacity to think of new possible worlds informed by the everyday challenges at a socio-political and economic level (Escobar, 2020;  McGinty, 2019; Tierra Fertil, 2022).

Such interrogation opens up possibilities for existing and re-existing amidst and despite the conflict (Walsh, 2010). This should be also a long-term goal for education as new generations will opt for better forms to deal with conflict and contribute to the consolidation of societies that embrace diversity and collaboration.  In this way, quality education has the potential to contribute to just and sustainable peace in which different members of the community are involved.

Yesid Paez is a Lecturer in Education at Bath Spa University. His research is concerned with peace building education and international development.