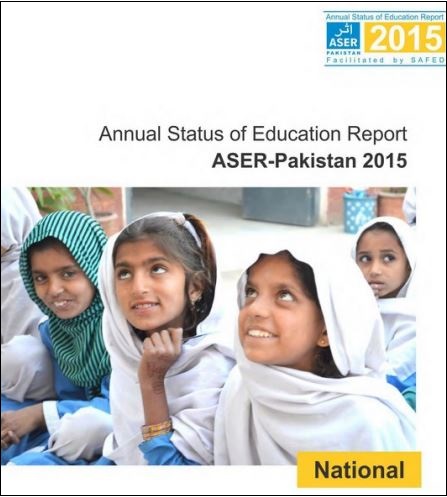 The recently launched ASER Report 2015 is a testament to civil society evidence-based activism that has drawn irreversible attention to the crisis of learning, both locally and globally. As we move forward towards the recently adopted Sustainable Development Goals (SDGs), we are reminded that the ‘learning plus access’ agenda for the education SDG (SDG ) would not have happened without the firm backing of the citizen-led nationwide assessments in Pakistan, South Asia and Africa. ASER Pakistan, ASER India, Uwezo in Kenya, Uganda, and Tanzania, Beekunko in Mali, Jàngandoo in Senegal, Medición Independiente de Aprendizajes (MIA) in Mexico, and LEARNigeria in Nigeria have emerged powerfully as the People’s Action for Learning Network (PAL Network) which believes in the power of involving citizens for creating learning accountability.

The education SDG carries a sector wide, ambitious and aspirational approach for ensuring all children and young people, regardless of their background, acquire relevant learning outcomes by 2030. Within SDG 4 target in particular, a lower-primary assessment goal has now been added for tracking proficiency in literacy and numeracy. The data provided by the ASER Report thus serves as an invaluable resource for setting the ground and understanding the extent of the learning crisis in order to meet the planned targets. The ASER 2015 survey was conducted in 146 rural districts of Pakistan, covering 83,755 households in 4,217 villages throughout the country. Detailed information was collected on 258,021 children (59% males, 41% females) aged 3-16 years. Out of these 219,609 children aged 5-16 years were tested for language and arithmetic competencies.

National rural findings revealed that 45% enrolled in class 5 still were not able to read a class two level story in their local language i.e. Urdu/Sindhi/Pashto. The situation is even more dire for English and Math. 51% of class 5 children could not read sentences in English (class 2 level) while 50% could not solve two digit division sums. Moreover, children enrolled in private schools were found to be performing better than those who were going to their government counterparts. But students studying in private schools were also observed to be taking more tuition when compared to government schools students.

The ASER 2015 data set also highlights the appalling access and gender disparities created in terms of enrollment and learning levels because of differences in wealth status. The indicators captured through household questionnaire measures the economic potential and achieved levels of income /wealth of a household. 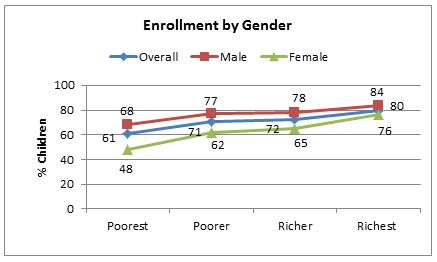 The analysis illustrates the long way to go to ensure all children even achieve one of the most modest of the sustainable development targets. In particular, it puts the spotlight on the need for reforms to start in the early years of pre-primary and primary schooling when learning gaps begin to form. It also highlights the importance of focusing attention on the poorest who have the furthest distance to travel if they are all to be able to achieve even the most basic skills by 2030.

The SDG agenda calls for an explicit focus on equity, including equity-specific goals and the ASER participatory model captures not just national averages but also the variation across different population subgroups defined by group and individual characteristics, such as sex, wealth, and location. It has a unique role to play in informing the general public, inspiring national discourse and demand for policy and action leading to transformation from the bottom-up.