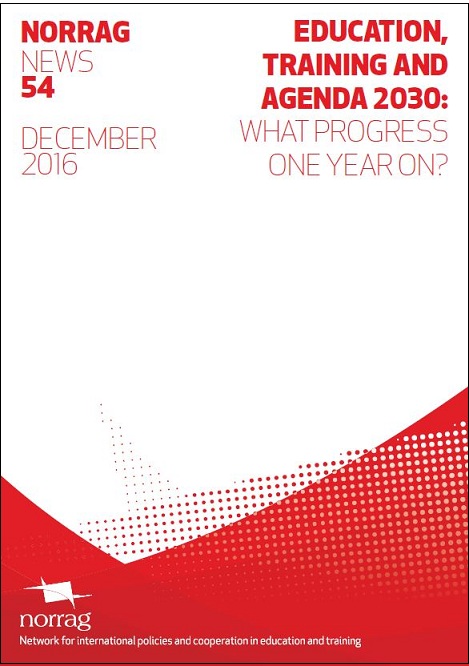 NORRAG NEWS 54 on “Education, Training and Agenda 2030: What Progress One Year On?” in now online.

It is just over a year ago on September 25, 2015 when global leaders adopted Transforming our world: the 2030 Agenda for Sustainable Development, in the 70th Session of the United Nations General Assembly.  Some may argue that little has changed in the global landscape since then, as war and conflict have intensified and the means to address the refugee situation continues to elude policy makers.  Yet there have been a number of significant developments, not least on October 4th 2016, the historic Paris Agreement on climate change came into force — years sooner than expected. With regard to  Education and SDG 4 – many of the 22 countries provided some reflection on progress in education during the High-level Political Forum (HLPF) in July 2016; the Education Cannot Wait (ECW) Initiative was launched; the cross-cutting SDG era Global Education Monitoring (GEM) Report was released and positively received, the International Commission on Financing Global Education Opportunity presented its Learning Generation report to the out-going Secretary General; and the former Executive Director of UNHCR, Antonio Guterres, was acclaimed as the new Secretary General of the UN, raising hopes that education generally and that of refugees will receive increased dedicated attention in the new agenda.

Over the course of the year the challenges of delivering on the expanded ambition SDG4/education were fully recognized, with many critics continuing to emphasize that the targets are unrealistic and unlikely to be achieved.  However, many stakeholders particularly among civil society emphasised the need to remain committed to an expanded universal vision focused on leaving nobody behind. At the same time there have been some significant developments at national, regional and global levels in attempts to come to terms with how to manage implementation that is not only greater in scope but also universal.  First it has been fully recognized that such a comprehensive and ambitious agenda, requires country-level action linked to existing national or (only if necessary) new contextually defined plans based on an assessment of the current situation.  This has been the clear message arising from the series of regional and sub-regional SDG 4 consultations held in Bangkok, Cairo, Dakar, Kathmandu, Nairobi, Lusaka, Sharjah, Paris etc. since September 2015.

This was also echoed in many national consultations most of which invariably and positively were not sector specific, but approached the SDG implementation from a cross-sectoral integrated perspective.  In this first year many countries have devoted some effort, time and resources to analyse the implications of the Agenda 2030 and establish links between the SDGs and national priorities of the respective countries. Countries as diverse as Belize, Germany, Ghana and Vietnam among many others have undertaken reviews to align national development plans with the SDGs. With regard to SDG4 specifically, a host of countries have had consultations and aligned or started the process to align national education plans with SDG 4 including: Afghanistan, Bangladesh, Bhutan, Cambodia, China, Cook Islands, Côte d’Ivoire, Djibouti, Egypt, Fiji, Federated States of Micronesia Islands, Gambia, India, Kenya, Lesotho, Lao People’s Democratic Republic, Maldives, Malaysia, Mauritius, Morocco, Myanmar, Namibia, Nepal, Nigeria, Oman, Pakistan, Palau, Palestine, Qatar, Saudi Arabia, South Sudan, Sudan, Swaziland, Syria, Tanzania, Thailand, Tonga, Uganda, United Arab Emirates, Uzbekistan, Zambia and  Zimbabwe.[1]

SDG consultations thus far have improved understanding of the SDG agenda, but have been inadequate. There has not been enough communication and understanding among policy makers, education officers and other stakeholders from senior levels down to rank and file staff responsible for policy implementation on what it actually means for their day to day work. For example, many SDG targets may mean curricular changes – what these changes are and how they may be enacted at different levels of the system and especially at classroom level is not clear for most actors in country. This is also the case for other requisite adjustments related to expanded early childhood education provision, learning assessment, skills development, TVET and higher education opportunities and the complexities of target 4.7. While most discussions have noted teachers as central to the SDG4 agenda, the challenge of addressing teacher shortages or quality has not been fully comprehended.

Many of the consultations at global, regional or national level have also surfaced tensions around prioritization, and between the interests of sub-sector stakeholders and constituencies. While there appears to be some commitment to lifelong learning, most consultations and plans are still dominated by an emphasis on basic formal education with some discussion of the need to expand TVET access with higher education receiving little attention. In terms of Target 4.7 the discussion and prioritization appears to focus primarily on global citizenship and how to measure it or its role as an antidote to extreme violence, with other aspects of 4.7 being downplayed or ignored.

While civil society actors have been quite active at global level in demanding greater civil society participation in the implementation of SDG4, and have been involved in the HLP review process and other global consultations, their participation in most countries appears to be quite minimal. There is no doubt that governance is a critical factor for successful implementation of the SDGs, and that ensuring transparency and good governance requires continuous monitoring from citizens. So it remains to be seen, given the current levels of engagement of civil society on the SDGs at national level, whether the role of civil society in accountability which is critical for the success of the new agenda is being adequately served. Hopefully, the 2017 GEM Report, which will focus on accountability, will shed some light on this issue.

Monitoring and reporting mechanisms for tracking progress toward SDG provide an enormous opportunity for learning and building on existing efforts, but this too has been a challenge given the delay in finalizing the indicators for monitoring progress. The recommendations of the Interagency and Expert Group on SDG Indicators (IAEG-SDGs), created to finalize a global indicator framework (and associated global indicators) were to be considered by the Statistical Commission at its forty-seventh session in March 2016, and endorsed by ECOSOC and adopted by the UNGA in September 2016. However, its remit and work was extended and it is yet to finalize the global framework, which is now projected for completion and adoption in March 2017.  Accepting that delay was necessary to ensure necessary clarity in the indicators and to address issues related to methodology and data gaps, it has nevertheless resulted in a fair degree of confusion.

The readjusted IAEG timeline has in turn affected the work of the Technical Cooperation Group on Indicators co-chaired by the UNESCO Institute for Statistics (UIS) and UNESCO Education Sector’s Division of Education 2030 Support and Coordination (UNESCO ED/ESC), comprising experts from governments, multilateral agencies and civil society. It works to produce comparable education data required to track progress and monitor Sustainable Development Goal 4. Part of this task is to finalize the thematic indicators for SDG 4 (of which global indicators to be finalized by the IAEG is a sub-set) as outlined in the SDG4-Education 2030 Framework for Action. Despite concerted efforts including two face to face meetings and several on-line consultations it has not been able to finalize the indicators for endorsement by the SDG-Education 2030 Steering Committee. The latest status is that it will present 18 Thematic Indicators and the 11 Global Indicators (or any additional that may be proposed by the IAEG) to the Steering Committee in December for tracking progress in 2017. Fourteen (14) indicators will require much more substantive work by the TCG before they can be endorsed.  As a result, tracking progress across all targets of SDG 4 in a comprehensive way will not be possible in the immediate instance.

Another key area of concern in this first year are unanswered questions on the issue of the increased finances needed from domestic and external sources for supporting the expanded agenda amid further evidence from the 2016 GEM Report and the Learning Generation on the widening gap in funding. There is no clear indication at this point on increased commitments from either source. In this scenario, the role of the private sector while increasingly in the spotlight, is not clear both in terms of increased funding but also its impact on the right to education. The issue of funding is further complicated by some of the proposals from the Commission for Financing Education Opportunities, in particular that of a multi-lateral Bank for Education Financing. It is not clear where additional funding will come from or how it will cohere with exiting mechanisms such as the Global Partnership for Education (GPE) or the newly created Education Cannot Wait (EWC) fund.

Despite these and other challenges, in particular related to   moving beyond slogans such as ‘leaving no-one behind’ and ‘not business as usual’, the general commitment expressed for SDG 4 and its fundamental importance for the overall SDG agenda give hope that action will be speeded up at all levels to ensure the promise of inclusive quality education and lifelong learning for all. The overall commitment and enthusiasm at different levels are promising and must be capitalized to support effective action going forward.

This blog reproduces an article in the new issue of NORRAG NEWS, NN54, on “Education, Training and Agenda 2030: What Progress One Year On?”.