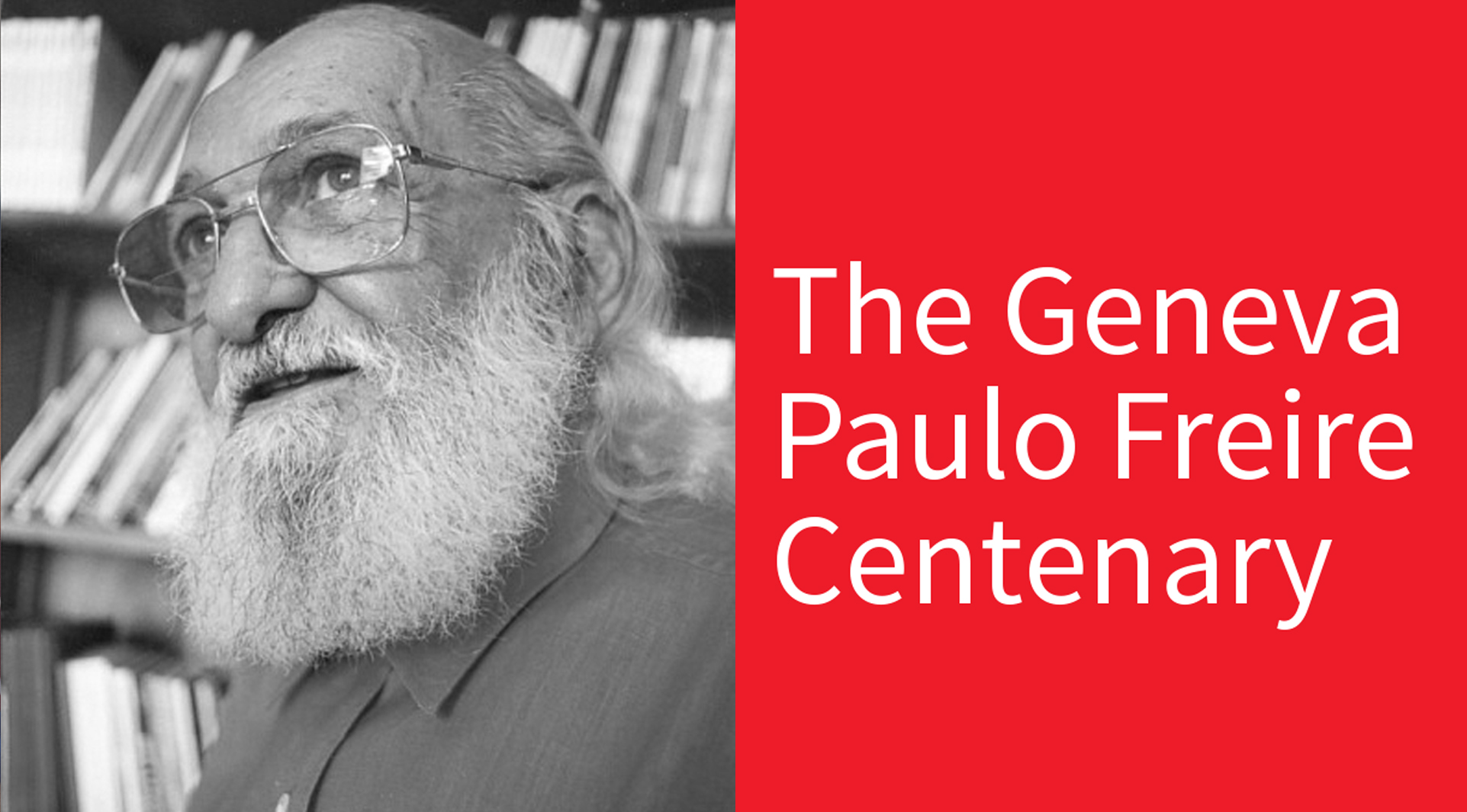 On 18 November 2021, NORRAG and Teachers College, Columbia University hosted “The Geneva Paulo Freire Centenary”, a webinar celebrating the Brazilian philosopher and educator and attended by 183 participants. The event was part of NORRAG’s and Teachers College’s celebrations for the Centenary of one of the greatest educationalists of the 20th century.

Watch the video in FR I PT

Gita Steiner-Khamsi, Professor at the Graduate Institute, Geneva and Teachers College, Columbia University and Director of NORRAG began by reminding participants that early members of NORRAG were “Freireans” and believed in relevance, local participation, local voice, and the central role of experts and researchers, notably from the Global South. These building blocks for education policy and practice are still dear to NORRAG members today.

Moira V. Faul, NORRAG Executive Director, reflecting on the legacy of Freire for practitioners in the field of education, highlighted for participants a panel discussion from 1988 with NORRAG Director Gita Steiner-Khamsi and Paolo Freire at the University of Zurich. She emphasized that, even a century on, Freire’s work continues to be innovative and disruptive in ways that can improve access, quality and equity in education.

Leon P. Tikly, UNESCO Chair in Inclusive, Good Quality Education and Global Chair in Education at the University of Bristol, UK offered a decolonizing take on Freire in his presentation “Freire in Africa.”

Freire had an intimate connection with liberation struggles in Africa. In this presentation, discussion focused on how Freire’s work including Pedagogy of the Oppressed was profoundly influenced by African intellectuals including Franz Fanon and Amilcar Cabral. The talk critically considered the contribution that Freire’s work made to national liberation struggles in South Africa and elsewhere on the continent as well as to the development of mass literacy programmes. The presentation concluded with a consideration of the relevance of Freire’s ideas today and in the context of regional agendas such as the African Union’s Agenda 2063.

“Can technology be an agent for Freirean emancipation? Case studies from Brazil and Thailand”

Paulo Blikstein, Associate Professor and Director of the Transformative Learning Technologies Lab at Teachers College, Columbia University, emphasized that digital technologies are often (and rightfully) associated with surveillance, exploitation, compliance, and control, and used in education to strengthen oppressive approaches to schooling. Such uses are even more present now with artificial intelligence, the ubiquity of smartphones and social media, and the partnerships being established between large technology companies and public school systems. In this talk, Blikstein presented experiences that tell a different story: how technologies can be used in subversive ways to challenge current classroom practices and public policy, à la Paulo Freire. Instead of being controlled by technology, children are given control; instead of using technologies for curriculum compliance, they use it to create projects connected to their lives and communities. Blikstein drew on analyses of data from different communities in Brazil and Thailand, both in public schools and in informal education.

“Repositioning Freire in a society that rejects critical rationality in Mozambique”

In his presentation, Joao Abilio Lazaro, Research Director at ISCED Open University (UnISCED) in Mozambique talked about how, as a politically and economically dependent element of our human existence, education has mainly been confined to a utilitarian perspective for people to be trained in view of meeting the demands of the labour market to promote economic productivity within society. This type of education, however, ignores the need for people to develop the Freirean understanding of critical rationality to promote a democratic consciousness, the values of human dignity and the moral and intellectual advancement of the human person. In fact, it is not through resorting to a utilitarian education approach that, for instance, social conflicts, social injustices and social inequalities can be resolved. As a matter of fact, those who benefit from such social structures will never want to witness the improvement of the living conditions for the oppressed. Arguing for Freire’s approach for education that empowers the human person, Joao Abilio Lazaro challenged African political leaderships to embrace a critical consciousness-based education for the growth of their countries and citizens, as Freire would have defended it, particularly for the growth of the Mozambican people.

A lively round table discussion enabled exchange between participants and speakers. Read the agenda here

Leon P. Tikly is the UNESCO Chair in Inclusive, Good Quality Education and Global Chair in Education at the University of Bristol. He also co-directs the Centre for International and Comparative Education (CIRE) in the School of Education. A key focus of his work is education in low-income countries and in particular countries of sub-Saharan Africa. He is currently PI on a Global Challenges Research Fund (GCRF) Network Plus entitled Transforming Education for Sustainable Futures (TESF) (ESRC £4.75 million; 2019-22). This includes partners in Rwanda, South Africa, India and Somalia/Somaliland as well as in the UK and the Netherlands. The purpose of the Network Plus is to mobilise capacity to undertake Southern-led research into the role of education systems in supporting sustainable livelihoods, sustainable cities and communities and climate action. He is pleased to be collaborating on these interdisciplinary projects with colleagues from the School of Sociology, Politics and International Studies (SPAIS) and Geography. He has also recently directed projects on language supportive textbooks and pedagogy in Rwanda, and he previously led a DfID funded Research Programme Consortium (RPC) on Implementing Education Quality in Low Income Countries (EdQual) (DfID, £2.5 million; 2005-11). His presentation “Freire in Africa”’ was given during the event.

Paulo Blikstein is an associate professor at Teachers College, Columbia University, where he directs the Transformative Learning Technologies Lab. Blikstein’s research focuses on how new technologies can deeply transform the learning of science, engineering, and mathematics. He creates and researches cutting-edge educational technologies, such as computer modeling, robotics, digital fabrication, and rapid prototyping, creating hands-on learning environments in which children learn science and mathematics by building sophisticated projects and devices. He also focuses on the application of data mining and machine learning for the assessment of hands-on, project-based learning. Blikstein has spearheaded the FabLearn project, building advanced digital fabrication labs in middle and high schools in four continents. Paulo was also the Founder and Principal Investigator of the Lemann Center for Brazilian Education at Stanford, a 10-year initiative to transform public education in Brazil. In the event, Bilkstein presented “Can technology be an agent for Freirean emancipation? Case studies from Brazil and Thailand.”

Joao Abilio Lazaro (lavumoabilio@gmail.com) is an official translator (PT, EN and FR), Proof-reader, Lecturer and Researcher. He is currently working for ISCED Open University (UnISCED) in Mozambique. His areas of interest range from Political Science, Education, Political Theory, Philosophy and Humanities, among others. During the event, Lazaro presented on “Repositioning Freire in a society that rejects critical rationality in Mozambique, Keywords: critical consciousness, rationality, education, society.”

Presentation
Leon P. Tikly, UNESCO Chair in Inclusive, Good Quality Education and Global Chair in Education at the University of Bristol
Q&A with the audience

If you missed it:

Released on 19 September on the Centenary of Paulo Freire, is an archival video from 1988 of a panel discussion at the University of Zurich. At the panel, Freire speaks, among others, about education of migrants, the situation in Brazil, women liberation movements and develops some of the ideas from his landmark book Pedagogy of the Oppressed. Panelists included Paulo Freire and Professor Gita Steiner-Khamsi, NORRAG Director. Watch the video below.