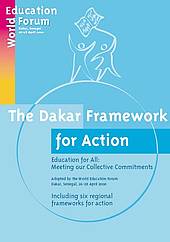 There is much excitement in South Korea about its offer of a Global Conference on Education in May 2015.

This is seen to be in the tradition of the iconic Jomtien conferences of March 1990 in Thailand, and the Dakar World Education Forum in April 2000 in Senegal. The return of a Global or World Conference to one of the nations that has invested in education more than most in the last 50 years is seen as highly significant and appropriate.

But what might be the agenda of such a meeting, and how might that agenda be constructed?

If this conference is a direct successor to the World Conferences on EFA of 1990 and 2000, then surely it will reflect back 15 years on EFA since 1990, and look forward to a new set of meanings for EFA toward 2030.

A series of questions suggest themselves:

Most generally, what will happen to EFA post-2015, and what will be the relationship if any with the post-MDG agenda – and with the SDGs? And how will any EFA post-2015 agenda relate to whatever the Open Working Group comes out with for a proposed education goal by Sept 2014?

The EFA agenda has been known since 2000.  But it has been the EFA Global Monitoring Report (EFA GMR) that has been largely responsible for keeping the eyes of the global international education community on EFA, as it has routinely, since 2002, reviewed progress against the Six Dakar Goals set in April 2000. In other words the GMR has sustained the EFA agenda.

How can the ongoing EFA consultation exercise help new EFA Goals to be developed, and existing Goals to be sharpened? Already, a single overarching goal has been proposed in the Dakar thematic consultation, March 2013, and the High Level Panel (HLP) has confirmed and developed a version of this ‘Universal Goal’ – ‘provide quality education and lifelong learning’, but has broken this illustrative education goal into four targets. These cover most dimensions of the original Dakar 2000 EFA goals except adult literacy. So what can be the focus of the new EFA Goals? Surely not just the same as the four HLP ones + literacy?

How should any new EFA post-2015 goals be constructed? In Jomtien 1990 and Dakar 2000, Thailand and Senegal respectively played almost no part in the substantive architecture of EFA; it was developed by the multi-lateral sponsors of the two conferences. Will that be the same in South Korea in April 2015? Or will a nation that has supported the recent G20 and the HLF4 not want to have some say on who wields the pen?

If major Korean institutions such as KEDI, KRIVET, KDI and KAIDEC[1] are to play a role, might they not suggest that the success of Korea’s dramatic development was not dependent on education alone, but on many other factors? Should the answer to this question not in part determine how the achievement of EFA can be assessed in the last 13 years since 2000?

Should Korea’s success in marrying education, skills and economic development not be seen as a relevant approach to EFA in the post-2015 period? If so, might not this suggest that EFA should encompass what has accompanied the success of East and South East Asian economies: strong traditions of vocational education and wide access to both public and private colleges beyond secondary school?

But if countries really pay attention to what lessons may be learnt from their host country (South Korea) in 2015, might they not end up seeing that education as a public good has been critical to the inclusiveness of Korea’s version of education for all? Yet the role of the private sector has also been critical, whether thru the private tutoring of public school students or thru the sheer range and scale of private college and university education. Might they not also see that the quality of vocational secondary education has been vital, including the more specialized ‘Meister’ schools?

In a word, might this not suggest that ‘Education beyond 2015’ could be more appropriate than ‘Education for All (EFA) Post-2015’, since the latter term has unfortunately become too entangled with attempts (and failures) to provide universal primary education and gender equality just in the developing world?

Surely in the Global or World Conference on Education in South Korea in 2015, we shall also want to learn about how they have been so successful in PISA, an issue of very considerable interest to all education ministries in the world. But equally victory cannot be declared on the EFA Goals; there is a massive unfinished EFA business as the GMR of 2012 has shown very forcefully.

We shall watch with great anticipation, therefore, the construction of the agenda for South Korea, May 2015. A major milestone towards that will be the Education Commission at the UNESCO General Conference of November 2013 which will debate Education Beyond 2015, and doubtless its relation to the existing EFA Goals.