On 24th September, one day before the UN General Assembly confirmed the Sustainable Development Goals (SDGs), including SDGs 4 and 8 relating to Education and Employment respectively, NORRAG co-organized a panel with Teachers College, Columbia University and the Graduate Institute of International and Development Studies (Geneva) on “Research and Teaching in International Education and Development: New Paradigms and Perspectives in the post-2015 Era”. The event was co-sponsored by NYU’s Steinhardt School of Education and the Open Society Foundations. More than 160 participants attended this event at Teachers College in New York.

NORRAG’s agenda with its partners challenged colleagues to explore what promise the new Education SDG holds for education and training, what interactions can be expected with other sectors, what implementation issues emerge and what will change in teaching, learning and research as a result of the world’s new development agenda.   We pick out here just a handful of highlights from the rich fare of issues raised by the panel (the full video of the event can be seen here).

First, Michael Gerber, ambassador and special envoy for sustainable development of the Swiss Ministry of Foreign Affairs, insisted on the universal nature of the new Goals, as a difference with the Millennium Development Goals (MDGs), and reminded the audience that the education agenda had dramatically widened beyond the school education as emphasized in the MDGs. Critically, it now addresses both technical and vocational education and training and basic education as well as their interrelation. This broadening of the agenda implies that partnership with the private sector has to be widened – not only in the field of TVET, as it is already the case in Switzerland – but also for covering a larger part of the education development costs.

This resonated powerfully with Peliwe Lolwana, Centre for Researching Education and Labour, Wits, South Africa. She too argued that the SDGs were dramatically enlarging the agenda beyond the MDGs and the Education for All (EFA) goals from Dakar to include technical and vocational education and training. She noted that this meant that a great deal more resources than for the schooling targets would be required. Equally, skills development was not something that could just be handed out; it meant that we had to consider the relation with labour market, jobs and employment for young people with skills.

Gita Steiner-Khamsi of Teachers College and Dana Burde from NYU were both concerned with the bridge between ‘policy talk’ and ‘policy action’, and between policy-makers and practitioners. This is critical for the SDGs, since at one level they are just policy talk, but at another level they are meaningless unless there are coherent strategies for implementation at the national, regional and global levels. It is also vital to realize that the Education Goal and its Targets have trans-sectorial implications for the other 16 Goals.

Noah Sobe, vice-president of CIES, and Loyola University of Chicago, analysed the crucial meanings of sustainability and freedom in relation to the SDGs. In a telling quotation from Chakrabarty, he argued the tension between the ambitions for freedom and the realities of the world’s unsustainability: “This mansion of… freedom stands on an ever-expanding base of fossil-fuel use.” Even a quick skim of the SDGs and the MDGs before them clearly reveals the host of resource and material supports that are necessary for the progress, empowerment and liberation being proposed.

[Interestingly, the word ‘freedom’ occurs just once in the 29 pages of Transforming our World while ‘sustainable’ occurs 155 times!]

Aleesha Taylor, Open Society Foundations, New York, reminded the audience of the enormous funding gaps for just three of the six former EFA Goals, and of how global education funding performed relatively poorly compared to global health. However she argued that there was significant scope for more innovative funding, and particularly for capacity building for innovative funding. 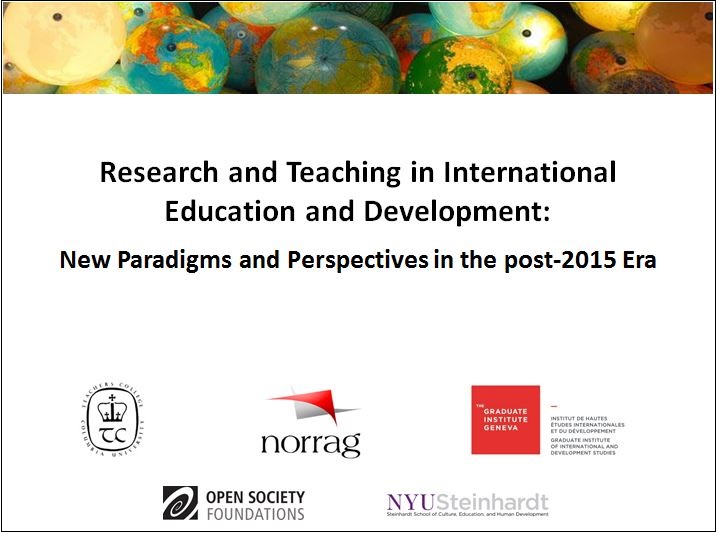 As far as the implications for teaching, learning and research in international education are concerned, there were several issues that the panel and the audience raised: the broadening of the research agenda to include the full spectrum of education covered in the SDGs and their interrelations; the new aid architecture and actors, including the private sector; the bridge between academia and practice; and, the call for a stronger involvement of partner institutions in the Global South.

As far as education and its relation with other SDGs were concerned, it was noticeable that over 250 economists had taken a full page in the New York Times on the same day as our event one day before the UN General Assembly to claim that ‘Investing in health makes economic sense’.  There was no such claim from education, but there could easily have been. This confirmed the comment from Gilles Carbonnier, from the Graduate Institute in Geneva that the global funding for education could learn from the global funding for health.

The event provided for stimulating and complementary views amongst the panellists and echoed the promise of the new SDG, despite its numerous shortcomings, for a holistic view on education and training in the frame of development, while maintaining a sound sense of realism in what can be achieved. It also reiterated the interrelation between the different education and training sectors, stretching from primary to vocational training in a lifelong learning perspective, as well as the importance of the Education goal as a vector for sustainable development running across the SDGs, themes that will be prominent on the research agenda of our field.

Joost Monks is the Managing Director of NORRAG, Geneva. Email:joost.monks@graduateinstitute.ch