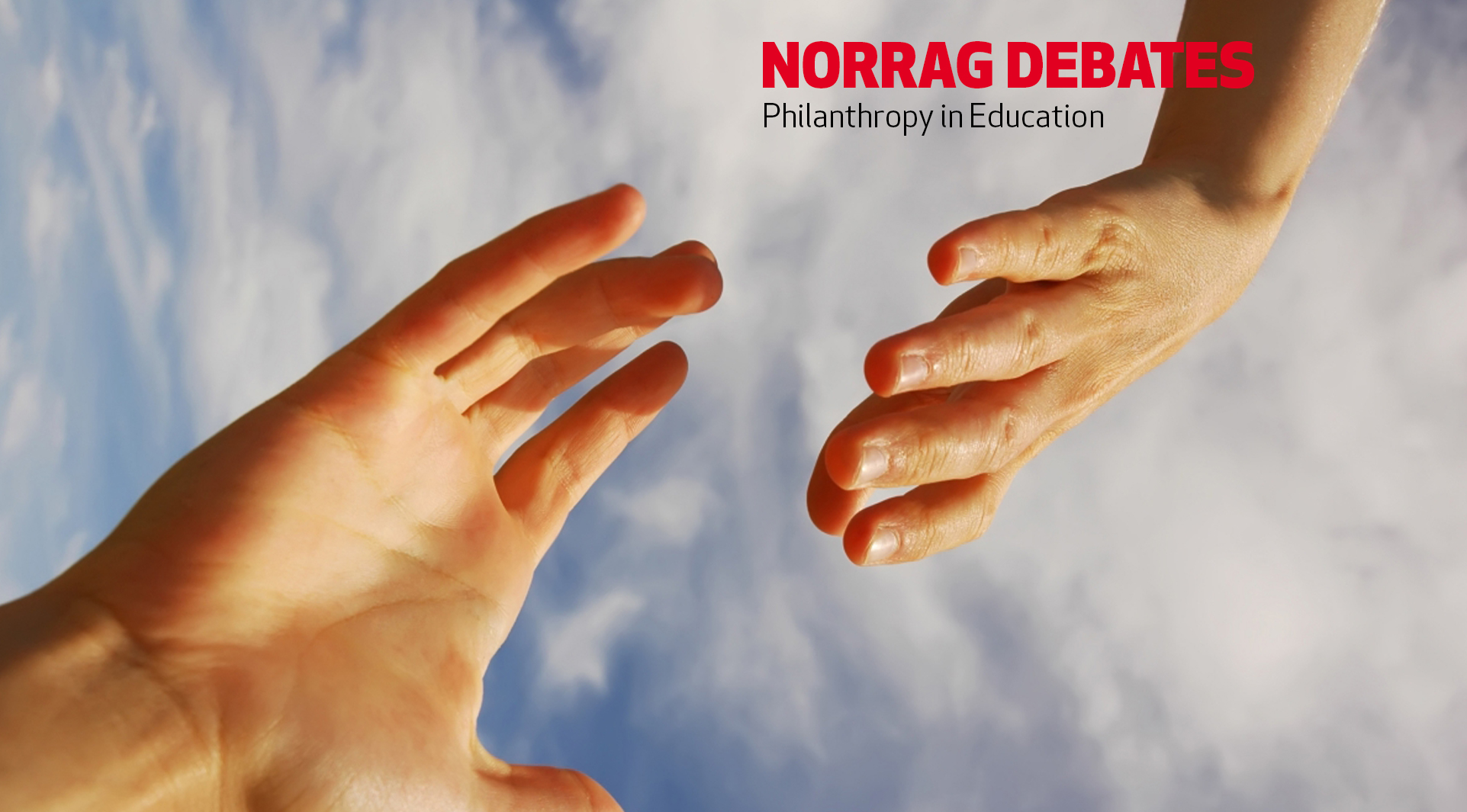 This post forms part of the NORRAG Debates stream on the role of Philanthropy in Education (PiE) and carries on from the paper presented by Gunay Faradova at the Inaugural Symposium on Philanthropy in Education: Global Trends, Regional Differences and Diverse Perspectives held in Geneva on 22-24 November 2017. The post draws on qualitative analysis of Russian philanthropic organisations to discuss funding for education in Russia and the need to develop a closer relationship between philanthropic priorities and national and global SDG targets.

Gunay Faradova is an independent researcher currently based in France.

According to the lessons learned from the Millennium Development Goals’ experience, insufficient resource mobilization, due to the inability to coordinate and engage different stakeholders, hindered the implementation of the MDGs. In order to avoid the same mistake, greater attention should be given to the possible contributions of different stakeholders in the implementation of the Sustainable Development Goals (SDGs).

Funding for development is becoming more diversified with growing private sector contributions. This has resulted in greater private sector involvement in the areas that were traditionally under public sector control. This is observed not only within a specific country context, but also across national and regional boundaries. For the education sector, the Education 2030 Framework for Action (FFA) also highlights the importance of the involvement by the private sector, philanthropic organizations and foundations in the implementation of SDG4. The role of philanthropy is perceived as a promising contributor, though overlooked by the MDGs which were overwhelmingly reliant on official development assistance. The Addis Ababa Action Agenda highlights the importance of the private sector, and in particular the role of philanthropy and foundations, as vital members of the global partnerships that are required to meet the SDGs. This recognition substantially improves the funding possibilities for the SDGs.

One key element of this potential comes from the BRIC countries—Brazil, Russia, India, and China represent an emerging market for philanthropy. The increasing number of wealthy individuals and families in these economies have fostered the development of the philanthropy sector.

There are a number of common factors which help to explain the giving tendencies of the BRIC economies. Attempts at economic liberalisation in place since the beginning of the 1990s have created new wealth and fostered the growth of a middle class, while at the same time provoked the accumulation of vast fortune within a new business class. This liberalisation has also exacerbated the unequal distribution of new wealth in already unequal societies.

Russia is a good example of this transition. Russia is a BRIC country that went through a transformation after the collapse of the Soviet Union. There is a long tradition of Russian charity, which dates back to before the Communist revolution. Even though much of this giving was directed to support mainly the arts and the Orthodox Church, wealthy Russians also made contributions to social and public needs (Spero 2014).

The trend changed its purpose and direction in the Soviet era. During the Soviet period, the public well-being was considered State responsibility, and any organized charity or philanthropic activities were prohibited. Moreover, charity was perceived as a “demeaning, manipulative and capitalist practice” (ibid).

The collapse of the USSR in 1991 was followed by the rise of a new wealthy group of industrialists and entrepreneurs, by way of the privatization of state-owned enterprises and companies which concentrated great wealth in the hands of the Russian “oligarchs”[1] (ibid).

Contemporary Russian philanthropy, a young and developing sector, continues to grow and is fast taking root in the lives of wealthy Russian individuals and families, as well as in the culture of corporations (Coutts 2014). With this progress, Russian philanthropy has contributed to alleviating poverty, as well as to addressing major social problems in the country. These philanthropic donations support a wide range of endeavours, including creating an effective social welfare infrastructure, which support education, research and the arts. The philanthropic foundations in the country serve as intermediaries through which profits earned by individuals and businesses are channelled to address important social issues of the country (Livshin and Weitz 2006).

Analysis of 45 key philanthropic institutions (private, corporate and community foundations) that are involved either directly or indirectly reveals that while philanthropies are contributing to the development of the education sector, these activities are far from supporting the 2030 Agenda and SDG4 in its entirety. These activities include supporting gifted students, providing scholarships, cash donations, in-kind contributions and so on.  As a group, they lack coherence and consistency and perform on the interests and intentions of founders/senior management. Thus, it’s difficult to trace their direct link with the global education agenda. There is obvious potential for philanthropic sources to support SDG4, but to make it happen they need to strengthen partnerships and cooperation amongst themselves and to engage in the development of the education sector more broadly by linking with the global agenda commitments.

The challenges facing philanthropy in Russia are aligned with those at global level. It is almost impossible to trace philanthropic contributions to education development and support. Publicly available information provides a general idea about the purpose of projects and programmes as well as their beneficiaries, but they neither describe exact amount of grants or donations, nor provide any follow-up actions on outcomes. This complicates possibilities for thorough analysis on trends, challenges and opportunities of the philanthropic development in the country.

Further, most programmes and projects are short-term with a specific objective. These donations may, coincidentally, be aligned with the priorities of national policies and strategies in education, in terms of supporting gifted students, providing scholarships or assisting in social inclusion of children with disabilities and orphanages (MESRF 2014), but philanthropic contributions in the country do not have a systemic approach.

It is important to highlight that Russian philanthropy has country-level scale, meaning that almost all of these donations stay within Russia, as Russian philanthropists are preoccupied with solving domestic problems. Moreover, almost 90% of donations go to state-run bodies or establishments (Livshin and Weitz 2006). In other words, the Russian model is based on internal philanthropy.

Furthermore, in Russia, philanthropy and charity are perceived by local population as a possible elaborate scheme for money laundering or as an attempt to pay off for dishonestly acquired wealth (Kuzina). The fact that a company manager or an owner of a foundation (in case of private or corporate foundations) has decision-making power in terms of distribution of funds to education-related activities and events, as well as in terms of distribution grants and scholarships, only exacerbates the mistrust among the population of the honesty of their actions (Krestnikova and Levshina 2002).

Compared with government expenditures, these philanthropic donations are relatively small, and alone will not be able to cover the financial gap needed to reach global education goals. Moreover, these contributions tend to be short-term and unpredictable, and the length of support largely depends on each foundation. While their flexibility allows foundations to reach most marginalised population, the inconsistent character of these donations makes it complicated to trace the outcomes.

In the frameworks of SDG4 implementation, Russia has made significant progress in access to education. 96% of the population has at least secondary education, and the portion of the population with higher education level continues to increase. Nevertheless, the Russian education sector faces several challenges that might affect its achievement of SDG4, including quality education, gender parity, skills development, and regional equity. Thus, there is an obvious need to increase awareness-raising activities to promote the global agenda and in particular SDG4 on education among these foundations through already-existing networks and platforms, including cooperation channels in the country (for example: Russian Donors’ Foundation). This could assist foundations to identify the ways to align their contributions with national education policy priorities, and then with those of the global Agenda.

[1] The term of the Russian oligarch designates wealthy businessmen and entrepreneurs of the former Soviet republics, who rapidly accumulated wealth after the collapse of the Soviet regime during the Russian privatization era.

Coutts. 2014. “Philanthropy is fast taking root in the lives of wealthy Russian individuals and families, as well as in the culture of corporations”. http://philanthropy.coutts.com/en/reports/2014/russia/discussion.html#XG2zWlRzRyx2GQl0.99

Kuzina, Olga. « Charity in Russia as a social institute »