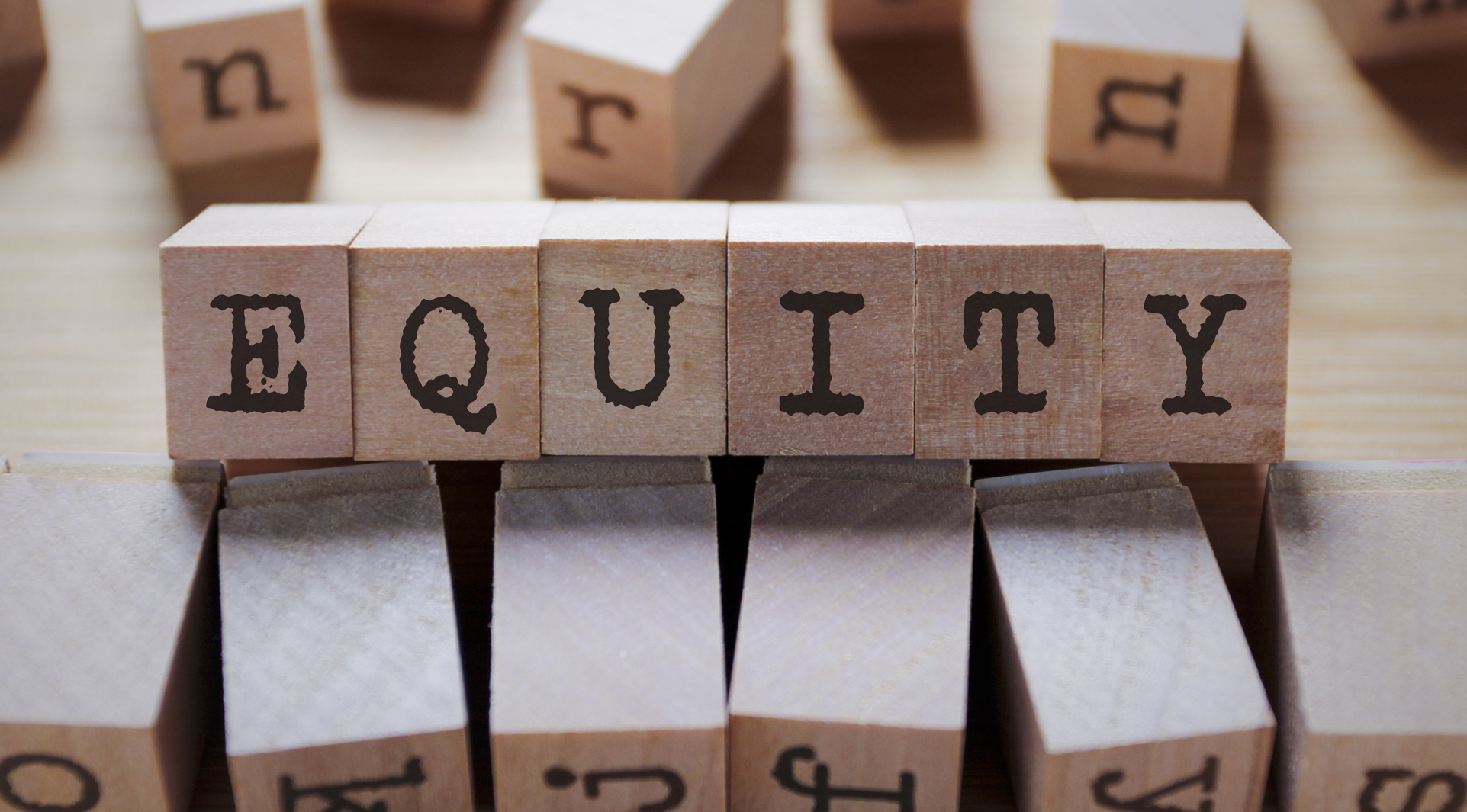 This NORRAG Highlights contributed by Adrián Zancajo, British Academy postdoctoral fellow in the School of Education at the University of Glasgow, provides an insight into the current debate on equity effects of education markets. The author discusses the increasing focus of international organizations on responding to these challenges with regulatory frameworks, policy designs and accountability measures and explains why these efforts may not be sufficient to achieve equity.

Last May, the OECD released a report entitled ‘Balancing School Choice and Equity’. Beyond its specific focus, the title of the report synthesises an emerging discourse among different international organisations regarding privatisation and market-oriented policies. Concerns about the negative effects of pro-market policies on equity has resulted in a new emphasis on regulatory frameworks and policy designs. In this post, I would like to summarise how international organisations like OECD and the World Bank have started to focus on the equity implications of the education market, which policy solutions they have proposed, and the possible shortcomings of these proposals.

As we know, since the nineteen-eighties pro-market policies in education have spread all over the world. This has meant the global expansion of private enrolment (based on UIS data, the average rate of growth worldwide was 97.8% between 1990-2018, see Figure 1), particularly in middle- and lower-income countries, and an increasing role of policies such as school choice and competition between schools. This expansion has taken place due to the establishment of Public-Private Partnerships (PPPs) but also because of the growth of private independent schools in many countries of the global south. Concerns regarding their negative effects on equity have arisen simultaneously. For many years, academics, advocacy groups and other civil society organisations have warned about the strong likelihood of private providers and education markets in fostering school segregation, educational inequality and the marginalisation of socio-economically disadvantaged students. 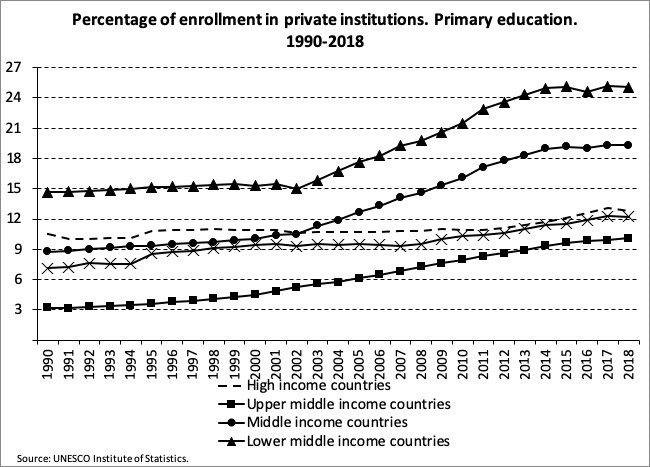 However, the focus on the equity effects of the education market has gone beyond the traditional academic and civil society spheres. Recently several international organisations have incorporated these concerns in official documents. For example, the OECD has produced evidence demonstrating how in some contexts the presence of private providers, voucher schemes, school choice and competition between schools can lead to an increase in educational inequality and school segregation (OECD, 2011, 2012, 2014). Meanwhile, the 2017/8 Global Education Monitoring Report (chapter 3) included a specific focus on the capacity of market mechanisms to negatively affect socio-economically disadvantaged populations. As Srivastava (2017) has pointed out, the World Bank, a traditional education privatisation and pro-market policies advocate, recognised in the 2018 World Development Report that the rapid expansion of private provision and the increasing diversity of educational providers has created a significant challenge for some national education systems. Furthermore, the report also recognises that the unregulated involvement of private providers can negatively affect the learning opportunities of socio-economically disadvantaged students.

Despite concerns regarding the equity effects of pro-market mechanisms, international organisations have focused not on discouraging them but rather on an emphasis on regulatory frameworks, policy designs and accountability. The following quote from a recent OECD policy report, summarising its position regarding vouchers and school choice, illustrates this approach: ‘What matters are smart policies that maximise the benefits of choice while minimising the risks and establishing a level playing field for all providers to contribute to the school system’ (OECD, 2017, p.3). Similar approaches can be found in other policy documents produced by UNESCO or the World Bank (e.g., UNESCO, 2015; Moumme & Saudemont, 2015; Pedró et al., 2015; Lewis & Patrinos, 2011; Baum et al., 2014). In the same vein, accountability devices, including information systems, are frequently presented as a means to ensure that all social groups have the same capacity for choice or that school competition takes place under fair conditions. From this perspective, international organisations consider that optimal regulations and policy designs would allow education systems to combine the supposed benefits of market-oriented policies (i.e., curricular diversity, innovation or quality improvements) without increasing educational inequalities. It is assumed that regulation and policy designs should be enough to deal with the unintended consequences of these policies, as well as the opportunistic behaviors of some actors. Despite the fact that scientific evidence on the positive effects of private provision and market mechanisms is, at best, nonconclusive, the focus on policy designs and regulatory frameworks is a new approach, particularly among those international organisations that have historically strongly advocated and disseminated pro-market policies or have maintained a neutral position.

In a context where regulatory frameworks have emerged as the principal policy recommendation, two main questions should be asked: Are regulation and policy design effective responses to the equity challenges of privatisation and pro-market policies? Is it, therefore, possible to balance education markets and equity? At the present time, the most honest answer to these questions is that the current evidence can neither support nor contradict this approach. Despite the vast amount of evidence that demonstrates that privatisation and pro-market policies tend to increase educational inequalities, the evidence on the impact of education market policy designs is relatively new, scarce and inconclusive regarding their effects on equity. Furthermore, the majority of the evidence available is mainly based on comparative studies on the regulation and policy designs in different countries. Although comparative studies can provide useful evidence, studies on the effects of education market regulation reforms in a concrete national education system allow us to understand how a new regulatory framework interacts with a specific context, which research has shown is an essential dimension to understanding the impact of the mechanisms in the education market.

Beyond the evidence on the effectiveness of education market regulation, studies that have analysed the social and educational dynamics of privatisation and marketisation policies might shed some light on their potential shortcomings. One can suggest three general observations derived from research:

As a result of the expansion of private education in many southern countries, the debate on how to deal with the equity challenges is expected to heat up. Many countries which have fostered educational expansion through the involvement of private actors will now face the need to develop active policies to reduce educational inequalities. In this context, the proposals on regulation, policy designs and accountability devices are unlikely to be the whole answer, as private actors and even parental demand will seek and find ways to circumvent regulatory frameworks and policy designs.

This blog entry is based on the research project currently developed by the author and funded by the British Academy, ‘Is it Possible to Decommodify Education? Evidence and Lessons from the Chilean Education Market Reform’.

Adrián Zancajo is a British Academy postdoctoral fellow in the School of Education at the University of Glasgow. His main areas of research are education privatisation and pro-market reforms and its effects on educational inequalities. Currently, he is developing a research project on the education market regulation reform in Chile. Email: adrian.zancajo@gmail.com