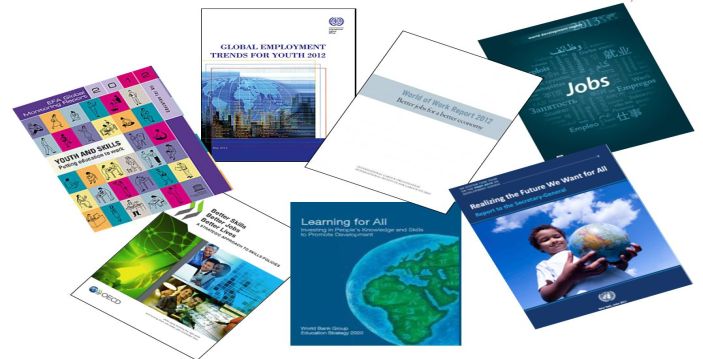 2012 saw the arrival of a whole cluster of global reports on TVET, Skills, Work and Jobs, including from the ILO, World Bank, OECD, UNESCO, McKinsey and others. And what makes a report ‘global’ anyway? Is it possible that ‘regional’ reports like the Asian Development Bank’s Good Practice in Technical and Vocational Education and Training or Skills Development in the Asia-Pacific Region could have global implications despite their regional focus? And equally that ‘global’ reports may not make much sense in particular regional contexts? Here we pick out a number of themes that may be worth looking at critically in this clutch of reports. These were discussed in more detail at the Asian Development Bank’s International Forum on Skills Development in December 2012.

The Education for All (EFA) Global Monitoring Report (GMR) of 2012 uses skills in four main ways: foundation skills, transferable skills, technical and vocational skills, and life skills; But, arguably, foundation skills are privileged because they may be claimed as the right of all, young and old, rich and poor. In McKinsey’s World at Work ‘Skills’ turns out to mean ‘Education’ and high, medium and low skills are the same as college, high school and primary school levels. Confusingly, ‘low skills’ means one thing in the richer countries and another in the poorer. By contrast, the OECD’s Better Lives divides occupations into high, medium and low-skilled, with craft and trade categorised as ‘medium’ and agriculture as ‘low-skilled’. But the OECD is also exploring skills through its Survey of Adult Skills which seeks to analyse skills by actual use rather than by occupational or educational levels. But this process will not be finalised till October 2013. The World Development Report (WDR), Jobs, has little to say about skills but seems to privilege complex problem-solving skills over routine manual skills. Finally, only the World Report on Technical and Vocational Education and Training (TVET) prefers to use ‘TVET’ rather than skills development, but it seeks to expand its scope from ‘learning to do’ to learning to be and to live.

Second, many of the global reports acknowledge that skills on their own don’t produce jobs but that there needs to be an enabling institutional, political, investment environment if skill acquisition is to lead to activation and to utilisation. In the case of large-scale labour migration that environment can lie outside the country.

Third, despite this message about the necessity of an enabling environment for jobs, there are some potentially misleading claims about the relationship of skills and growth. These are accentuated by the fact that ‘growth’ like ‘skills’, is used in several different ways. Although the GMR argues there is a ‘two-way street’ between skills and growth, nevertheless it is claimed that ‘investing in skills pays dividends’. More seriously, it can be deduced from the GMR’s dramatic comparison of South Korea with Ghana that Korea’s ‘investing in skills for prosperity’ via secondary education investment is what made the vast difference in economic growth between the two countries. Equally, a rapid reading of the OECD report could lead to the conclusion that the impact of half a year of schooling, over a period of 20 years, could make a difference of US$115 trillion. The same can be deduced from the McKinsey report’s claim that high-skilled workers are needed for economic growth. By contrast the ADB’s Good Practice in Technical and Vocational Education and Training (2009) argues that skills are a necessary but not sufficient condition for growth.

Fourth, the measuring of skills is made massively more complicated by the huge range of meanings of skills deployed in these global reports. In the GMR 2012, there are plentiful statistics on foundation skills in respect of access and some measures of quality, but very much less on transferable and on technical and vocational skills. As mentioned, the OECD’s Survey of Adult Skills’ results will be available later this year, but they would appear to cover only foundation and some dimension of transferable skills. There is some G20 work on internationally comparable indicators of skills  (e.g. numbers of youth in apprenticeships) being undertaken currently but it won’t be ready before 2015 (see EFA GMR, p.82-83).

Fifth, we have already seen that there is some danger running through several of the global skills reports of the ‘killer headline’, sound-bite or dramatic generalization. Even the title of a report can suggest a logical or causal connection that does not exist in reality; thus: Better Skills, Better Jobs, Better Lives (OECD). Or ‘More and better skills make it easier… to boost job growth’ (ILO); or ‘Skills have become the global currency of the 21st century’ (OECD). Or, finally, ‘a deficit of high-skills workers implies an intensifying global war for talent’ (McKinsey).

Sixth, there is a widespread tendency in these global reports to capture ‘good practice’ or ‘best practice’ in a series of illustrative boxes. Sometimes the evidence base for these best or good practice claims is not available. Sometimes, the ‘success’ has been with a relatively small number of students or trainees (a few hundred  or 1-2000 in some cases). On other occasions, it is clear that the ‘success’ has been entirely dependent on external aid funding. Often the headline does not suggest the complexity of the relationship which may be explained in more detail in the text: e.g. ‘Education and Skills contribute to growth’ (GMR). One of the most iconic claims concerns farmer field schools in East Africa: ‘Crop value per acre increased by 32% on average across the three countries, and by 253% for those who had not had any formal schooling’ (GMR).

Seventh, we have already referred to the problematic assumption that global reports have implications for a whole series of different regional contexts. Global reports certainly do play a critical role in interpreting examples and illustrations of TVET practice that are present in many different policy and political environments, and in drawing them to international attention. This is a highly complex process and it may or may not involve encouragement to engage in policy borrowing. However, the UNESCO World TVET Report correctly argues that ‘there is no toolkit of TVET solutions that can simply be borrowed’.

This brief safari around these global reports, which total some 2000 pages, suggests that they provide a great deal of interesting material for both the policy and the academic community. The challenge is how either community can rapidly reach a view of their value for national debates and possible action. In a small way, it is hoped that the special issue of NORRAG News (48) which is dedicated to analysing these many skills reports can play a useful role in offering a wide variety of different views of their value. This should be available in late February or early March 2013.