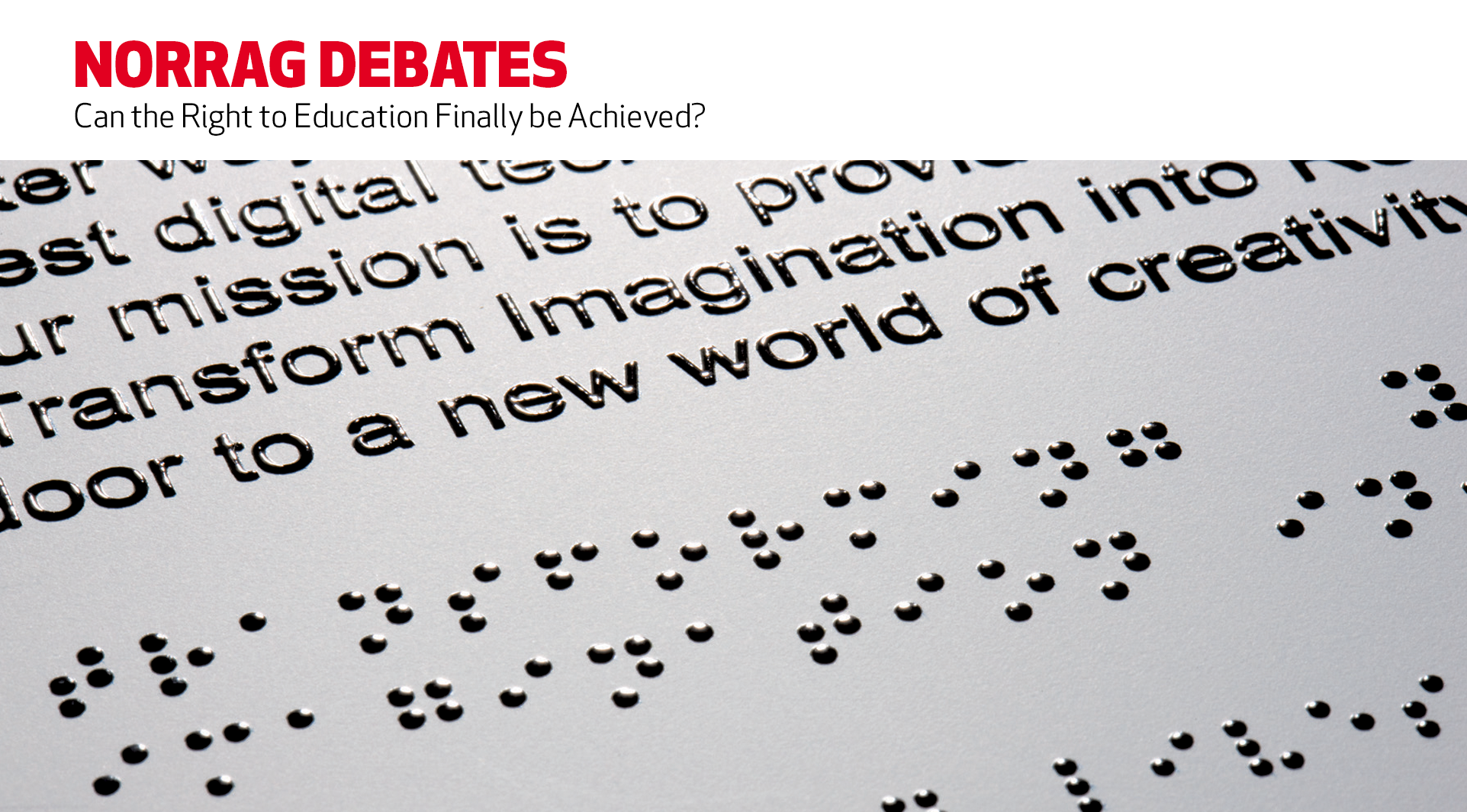 This blog post is part of the NORRAG Debates stream on the Right to Education. Susan Isiko Štrba, visiting Senior Research Fellow at the University of the Witwatersrand, South Africa, looks at two international partnerships that promote access to books and learning material of persons who are blind, visually impaired, or otherwise print disabled.

Copyright and access to education for VIPs: The Marrakesh Treaty

According to the World Health Organization, there are more than 253 million visually impaired persons in the world, 90 per cent of whom live in developing countries. The World Blind Union estimates that less than 10 per cent of published books can be read by blind or low vision people in developed countries.

While international copyright law allows some use of a work without having to seek permission or pay royalties, limitations and exceptions (L&E) in national copyright law vary widely,[v] leading to some legal uncertainty. Yet in the digital environment, even legally permitted L&Es can be rendered impossible to use by technological protection measures (TPMs) as prescribed by the WIPO Copyright Treaty (WCT).

One of the solutions was the Marrakesh Treaty, which allows cross-border exchange of books in accessible formats – such as braille, audio, and large print – under mandatory L&Es.  The Marrakesh Treaty aims at creating a set of mandatory L&Es so as to increase the number of books in accessible formats for VIPs. It addresses what is commonly referred to as ‘the book famine’ by requiring parties to the Treaty to introduce a standard of L&Es to copyright rules so as to permit reproduction, distribution and the making available of published works in accessible formats. The treaty is thus intended to facilitate harmonization of copyright L&Es so that organizations that serve VIPs can operate across borders. It has been ratified by 41 countries, and a further 60 have signed it.

Although its conception precedes the SDGs, the ABC corresponds to the broad description of partnership envisaged by them, and illustrates some of the potential benefits as well as challenges of partnerships to achieving development goals, such as the right to education, within global intellectual property (IP) regimes. The ABC partnership includes libraries for the blind, publishers and funders.[vi] Its objective is to complement the Marrakesh Treaty by increasing the number of books worldwide in accessible formats for VIPs.

The activities of the ABC include: (a) capacity building to improve relevant skills and knowledge in order to increase the number of accessible books for VIPs in developing and least developed countries; (b) promotion and training of publishers in the use of accessible format technologies; and (c) encouraging cooperation and fostering relationships amongst VIPs, authorized entities, rightsholders, and technology companies. These activities are carried out through three main projects; ABC Global Book Service (previously known as TIGAR), the Capacity Building project and the Inclusive Publishing project.

ABC’s Global Book Service (ABC GBS) is a global library catalogue of 319,000 titles in accessible formats that enables libraries serving the print disabled to share items in their collections, rather than duplicating the costs of converting them to accessible formats. Over 165,000 people with print disabilities have borrowed accessible books through the participating libraries in the ABC GBS. However, the catalogue operates under individual licensing. Permission has to be granted by copyright holders in order to allow the cross-border exchange of electronic files of accessible books that have already been produced legitimately by an institution. WIPO negotiates the licences on behalf of institutions interested in using any book listed in the catalogue. In addition, the catalogue contains mainly books for leisure reading and insufficient educational material.

The Capacity Building Project of the ABC involves training in developing countries for local NGOs, government departments and commercial publishers who want to produce and distribute their books in accessible formats. Projects are ongoing in Argentina, Bangladesh, Botswana, Burkina Faso, India, Mexico, Nepal, Sri Lanka and Uruguay. Since the start of capacity building, over 4,400 accessible educational books have been produced in national languages in these nine countries through training and technical assistance provided by ABC, thus promoting the right to education.

The ABC’s Inclusive or Born Accessible Publishing refers to the promotion within the commercial publishing industry of techniques for publishing books usable by both sighted people and print disabled. The ABC Books for All Starter Kit for Accessible Publishing in Developing and Least Developed Countries (Kit) provides different stakeholders in these countries with information on how to partner with each other to increase the number of books in accessible formats at the national level. It is important for the government to take an active, if not leading role, in inclusive publishing.

The ABC has demonstrated that is it possible to have different stakeholders work together for the common goal of increasing books in accessible formats, albeit through a private licensing model. It also highlights the need for public and private policies on appropriate technology to facilitate effective use of accessible formats, whether provided via the Marrakesh Treaty or through private licensing. Many devices have built-in accessibility features that may provide text to speech access to different formats and allow changes to the presentation of text. However, some formats may require additional software or apps to be added.

The VIP Treaty is a powerful tool for increasing access to reading material by the VIP community. It anticipates partnership among contracting states, authorized entities and the WIPO International Bureau. On the other hand, the Consortium is a practical initiative to implement the objectives of the Marrakesh Treaty. Equal access to copyrighted works in formats designed to be accessible to those with sight loss and print disabilities will not be solved by copyright L&Es alone, as provided in the Marrakesh Treaty, but rather via multipronged approaches involving both public and private law and policy initiatives. In this sense, the ABC complements the Marrakesh Treaty by demonstrating methods to increase both inclusive publishing and capacity building to use accessible formats by all readers, including VIPs, for purposes such as education.

By promoting innovation in creation, distribution, and use of accessible books formats for VIPs, the ABC is one example of contribution to the implementation of SDG 4. It provides some models for technical assistance and capacity building both in publishing and use of accessible book formats. It also highlights some of the challenges to the use of these accessible formats, which will not be solved by the legal platform of Marrakesh Treaty or other legal means, but rather by policy initiatives and the intentional collaboration of publishers of accessible formats with other stakeholders. But since the ABC’s GBS is based on a private licensing model, the publishers’ interests, and not the right to education, may drive the direction of the PPP. This may in consequence limit the wide dissemination of information and learning material, which makes public law frameworks (in this case the Marrakesh Treaty) important in providing clear public policy goals for the various stakeholders operating within PPPs.

The author is currently a visiting Senior Research Fellow at the University of the Witwatersrand, South Africa. Her most recent work on the topic is the forthcoming article, ‘The Marrakesh Treaty, Public-Private Partnerships and Access to Copyrighted Works by Visually Impaired Persons”[vii]

[i] Transforming our world: the 2030 agenda for Sustainable Development, document A/RES/70/1

[v] Susan Isiko Štrba, “A Model for Access to Educational Resources and Innovation in Developing Countries,” in Intellectual Property, Trade and Development: Strategies to Optimise Development in a TRIPS-Plus Era 286, 294 (Daniel Gervais ed., 2015).