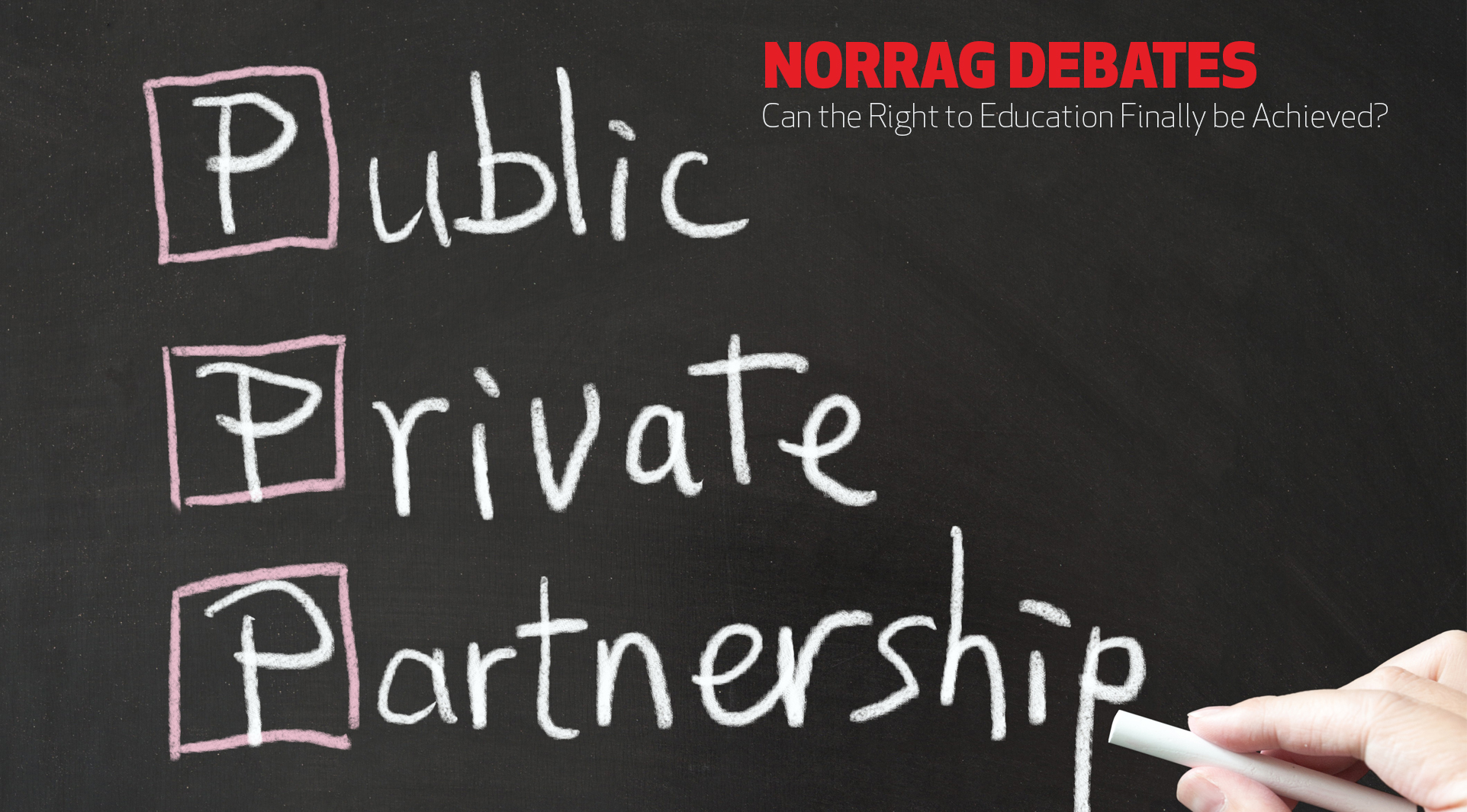 As part of the NORRAG Debates stream, NORRAG is starting a series of blog posts by bringing to the fore questions surrounding the realisation of the right to education (RTE). As the global education community makes progress towards the realisation of the ‘SDG 4 – Education 2030 Agenda’, questions related to ensuring the right to education of all children are re-emerging. Consequently the tension builds between fast and measurable progress and country-specific and qualitative progress towards the SDG vision. One of these questions pertains to the blurred boundaries between public and private institutions’ discourses and practices. A previous blog post by Elena Nitecki and Helge Wasmuth discussed how the Global Education Reform Movement is continuously gaining momentum, despite the absence of clear evidence on its benefits, and hints that it might actually have detrimental effects on children. In this piece Gita Steiner-Khamsi, Director of NORRAG, and Alexandra Draxler, Senior Adviser at NORRAG, build on a forthcoming NORRAG publication to provide insights into how public-private partnerships (PPPs) have contributed to fostering a culture of global public-good discourse which has been supported by corporate management models, and why the education community ought to listen to voices calling for caution on this type of approach.

Some three decades after the introduction and promotion of public-private partnerships (PPPs) in education, the reciprocal influence of the public and private sectors has seen them become similar in many regards. National governments in several OECD countries welcome and encourage PPPs in education. In the developing countries PPPs have been promoted by international organisations such as the World Bank and UNESCO and bilateral donors led by the USA and the UK. The close collaboration between the public and private for-profit sectors, advanced as part and parcel of managerial reforms, has blurred the boundaries of how the two types of providers conceive, design, and speak of basic educational services and goods.

The private sector (including in many cases the not-for-profit sector) has attempted to speak the language of the public sector by emphasising issues of equity and quality of education. Vice-versa, the public sector increasingly underlines the cost-effectiveness of its endeavors and has introduced, among others, creeping schemes of a fee-structure (free education for basic services but parental contribution for extra services and goods in some OECD countries); lowered investment in teacher education; acceptance of limitations on the right to free education for all; and the promotion of economies of scale for inputs internationally. The adoption of private sector language and techniques for education is built on the narrative of failure of public institutions and trust in the private sector as the favorable alternative. Thus, what we can call the ‘scandalisation’ of education, whereby problems related to management and outcomes are attributed to defects inherent to the public sector, has been used by supporters to validate industrial-scale solutions, including international large-scale student assessments (ILSAs) such as PISA, PISA-D, IEA studies, and regional ILSAs. Even though it is mainly the private sector that directly benefits from the scandalisation of the public education system, government officials or political oppositions also sometimes welcome the attack against public education, in the name of reducing public expenditure, limiting the power of teachers to organise, mobilising financial resources, and building political coalitions for introducing reforms.

Beyond the vocabulary of commitment to inclusiveness, nurture of diversity, and multiple paths for individual journeys in acquiring skills and competencies, a mass-production model has become increasingly accepted in both national and international circles. Scripted teaching, international standardisation of process and desired outcomes, and a focus on measurable performance, are the benchmarks of a manufacturing approach. Responsibility for failure is ascribed to individual stakeholders (teachers, learners, parents) or a general failure of the public sector, often ignoring structural weaknesses and special needs.

It is necessary to keep building the understanding of the roles of the various policy actors (businesses, transnational actors, non-governmental organisations) in weakening public education. We need to understand both the short- and long-term consequences of privatisation, particularly  when it reaches such a high volume that the middle class turns away from supporting the public sector, as is happening in countries as different as the USA, Australia, Liberia, and Kenya.

A significant body of research has shown that measurable education outcomes in private education, when socio-economic status is taken into account, are no better than those of the public sector. Lessons from privatisation of other public services, from transportation to utilities, show that unintended consequences take years to emerge, and can be devastatingly costly to repair. Yet, demand remains high for private schooling. Pressure from potential investors on local and national governments for the right to operate for-profit educational activities, from testing to teacher certification to entire institutions, is also high and growing.

NORRAG has engaged with the issue for a long time. A set of panels at the Comparative and  International Education Society conference (CIES) 2017 – organised by Education International, NORRAG, and the Open Society Foundations – explored these issues based on new research from Argentina, Brazil, Rwanda, countries recipient of refugees from Syria, and the USA, and provided overviews of trends and regulatory principles. Building on a solid body of research into the background for and the effects of privatisation, these studies focus on the growing cross-irrigation between the public and private sectors in influencing policy decisions; in introducing for-profit aims and incentives to the core of public education; and in promoting the notion that market objectives can benefit all stakeholders. The research will be published in book form in early 2018 and will be complemented with additional case studies and discussions on global governance issues. The publication discusses for instance the pivot of BRAC towards a for-profit model, reporting on research in Bangladesh, as well as private education in China. It will also include a comprehensive panorama of the international actors promoting educational reform through various types of privatisation, providing evidence that many of these actors prefer situations of fragility (economic, political, or humanitarian) because these are ‘privileged moments and spaces’ to promote pet policy and implementation experiments.

Recent Research Calls for a More Cautionary Approach to PPPs

The research presented in this upcoming volume constitutes an important warning, given that examples of mixed results and pernicious stakeholder behaviors emerge. Indeed, an overview or the role and impact of international actors on policy formulation reveals that these are ‘especially active in the promotion of education privatisation in contexts of social, political, and economic vulnerability’, through high poverty, instability, or emergency situations. Authors discuss the main facilitators of policy transfer, and experimentations with different forms of privatisation are what they call ‘privatisation by default’ and ‘privatisation by catastrophe’. ‘Privatisation by default’ is the setting in which insufficient access to basic education can be presented as advancing education for all through the establishment of low-fee private schools. ‘Privatisation by catastrophe’ is the situation in which the diversity of channels of education supply, notably by for-profit actors, can be pushed through in the absence of sufficiently structured local governance mechanisms.

In Buenos Aires, Argentina, government subsidies for low-fee private schools are institution-based rather than per-capita-based. While in theory subsidies for opening and operating schools in under-served neighbourhoods might seem appealing, these schools in fact actually compete with tuition-free state schools in some of the poorest neighbourhoods. By focusing both on selectivity and differentiation from neighbouring institutions, they position themselves to accept learners on several criteria, based on those who are most likely to succeed. Interviews revealed broad knowledge of the education landscapes in the surrounding neighbourhoods among providers, and relatively low state oversight. In consequence, low-fee private schools have relatively fewer resources and operational constraints.

Network analysis research on philanthropy in Brazil shows a growing sphere of influence of philanthro-capitalists on policy-making. Key strategies include autonomously-generated research on key areas of interest; substantial relationships with university researchers within and outside Brazil; the organisation of events; and the strengthening of networks through sharing of financing, labour, and network capital, to create an influential lobby.

In Rwanda, a PPP sponsored by the UK’s Department for International Development, as well as by loans from the International Finance Corporation, makes loans available to parents to send their children to low-fee private secondary schools. On-going research into how this affects households; on the reasons for parental choice; on government costs for the scheme; and on the quality of these schools, was outlined. Preliminary results show that the enrolments do not come from the lowest socio-economic groups but rather poach students from more expensive private schools. At present, it is too early for rigorous research on learning outcomes.

In the USA, the federal government and many states have adopted business logic and performance criteria in the establishment, operation, and governance of schools. Numerous negative consequences have emerged in multiple areas. Parents and teachers are beginning to revolt against the high-cost, low-benefit, and low-quality of incessant standardised testing. The teaching profession, under attack, is suffering from reduced intake and high turn-over. The insufficient regulation for opening and running charter schools can result in much higher costs than public schools, without demonstrably improved outcomes.

Hyderabad, India, has a significant highly-educated and technologically savvy population. An entrepreneurial approach to education for the poor has taken hold.  Private education at school level is highly regulated, but at pre-school level there are opportunities for profit, and investors have been active in looking at profitability possibilities among all socio-economic groups.

Research on education initiatives targeting Syrian refugees in neighbouring countries, notably Jordan, shows, that entrepreneurial non-governmental organisation have adopted a business approach to educational provision, seeing disasters as exciting new market opportunities, a phenomenon the authors call ‘disaster capitalism’.  The Open Society Foundations has considerable experience in analytical work on privatisation through its Privatisation in Education Research Initiative on-going since 2009. It has been spearheading efforts to develop a human-rights based regulatory framework concerning private involvement in public education. Groups committed to the right to education as the over-arching conceptual structure are, however, skeptical about whether or not to support regulation, or to focus on strengthening public sector provision and eliminating market approaches to compulsory education.

Central to the promoters of an interface between public and private sectors in education, is the notion that competition is not only useful, but essential for positive change. This notion, as indicated at the beginning, finds advocates from public and private sectors alike. As large transnational businesses find in education a new frontier for profit, they promote a theory of change that posits compatibility between profit and the public good.

The authors assembled by NORRAG in its forthcoming publication argue, through the presentation of their research in diverse countries and contexts, that empirical evidence suggests there are negative consequences of this approach in terms of scale, equity, accountability, quality, and cost.