This post is published as part of the debate series: Towards Evidence-Based Financing for Education in Emergencies, by NORRAG and INEE, intended to promote discussion of and explore the linkages between financing and evidence for education in emergencies (EiE). It is also jointly published by NORRAG and the Internal Displacement Monitoring Centre (IDMC) on the occasion of the High Level Political Forum in New York on 9 July, which will review, among others, progress towards SDG4. A group is particularly fragile when it comes to reaching universal education goals: internally displaced children and youth. IDMC, with this post, highlights the new body of evidence which could help the visibility of educational challenges linked with internal displacement.

Today, representatives from governments around the world are gathered in New York City to review progress they made toward universal education since 2015. The High Level Political Forum, an annual event where countries present their advancement towards achieving the Sustainable Development Goals (SDGs), opens this year with a focus on the education goal, SDG 4. Internally displaced children and youth are among the groups furthest behind in terms of access to education and educational achievement, yet they often receive little to no educational support in emergencies.

We now have a better understanding of the scale of the issue, as the first estimates on the number of school-age children living in internal displacement are available. At the global level, at least 12.6 million children of primary or secondary school-age are displaced within their own country because of conflict or violence alone. Most of them live in sub-Saharan Africa, where even non-displaced children often face challenges in accessing quality education. Millions more are displaced because of disasters, climate change and other causes.

Ways to use and improve this new information on the education of internally displaced children, and recommendations on how governments, humanitarian and development actors can protect their right to quality education, are discussed in the two papers. 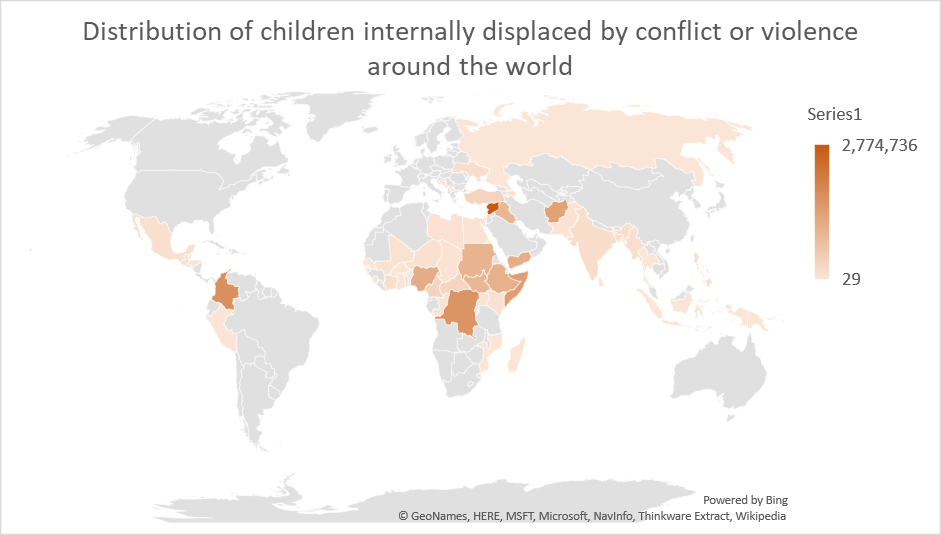 As the first assessment of the cost of internal displacement on education was published in February this year, we can now inform development planning and crisis response strategies of the countries affected by internal displacement, and of humanitarian and development organisations, with  an estimated budget they would need to cover basic educational needs of all internally displaced children. This budget approximates USD 850 million per year of displacement at the global level, for conflict-affected children only.

Investing in continued education for displaced children is not only economically sensible, as it supports their future income and ability to contribute to the economy. It is also a crucial step in mitigating the negative consequences of internal displacement on their mental and physical health, their security and social life and, eventually, the stability of entire communities.

This year could be a significant year for the visibility of educational challenges linked with internal displacement.  IDMC will soon publish a background paper to UNESCO’s upcoming Global Education Monitoring Report, focusing on sub-Saharan Africa; the region where most internally displaced children live, with over 8 million IDPs under 18 recorded in 2018 in only 23 countries affected by conflict and violence. In October, the Special Rapporteur on the rights of internally displaced people will publish a dedicated report on education. With this encouraging momentum on an issue that has been largely overlooked until now, we invite other interested organisations to join with us to disseminate, improve and use this new body of evidence on internally displaced children and their educational challenges.

Editor’s note: This post is published under the Data and Evidence in Emergencies in Education series by NORRAG and INEE to promote discussion of pressing issues in education in emergencies (EiE); its contents and views do not necessarily reflect that of NORRAG and/or INEE. This post is jointly published by NORRAG and Internal Displacement Monitoring Centre (IDMC).

NORRAG is a global membership-based network of international policies and cooperation in education, established in 1986. NORRAG’s core mandate and strength is to produce, disseminate and broker critical knowledge and to build capacity among the wide range of stakeholders who constitute its network. NORRAG contributes to enhancing the conditions for participatory, informed, and evidence-based policy decisions that improve equity and quality of education. Learn more at www.norrag.org

Disclaimer: Both NORRAG and INEE offer spaces for dialogue about issues, research, and opinion on education and development. The views and factual claims made in the posts in this joint NORRAG-INEE blog series are the responsibility of their authors and are not necessarily representative of NORRAG’s or INEE’s opinions, policy, or activities.