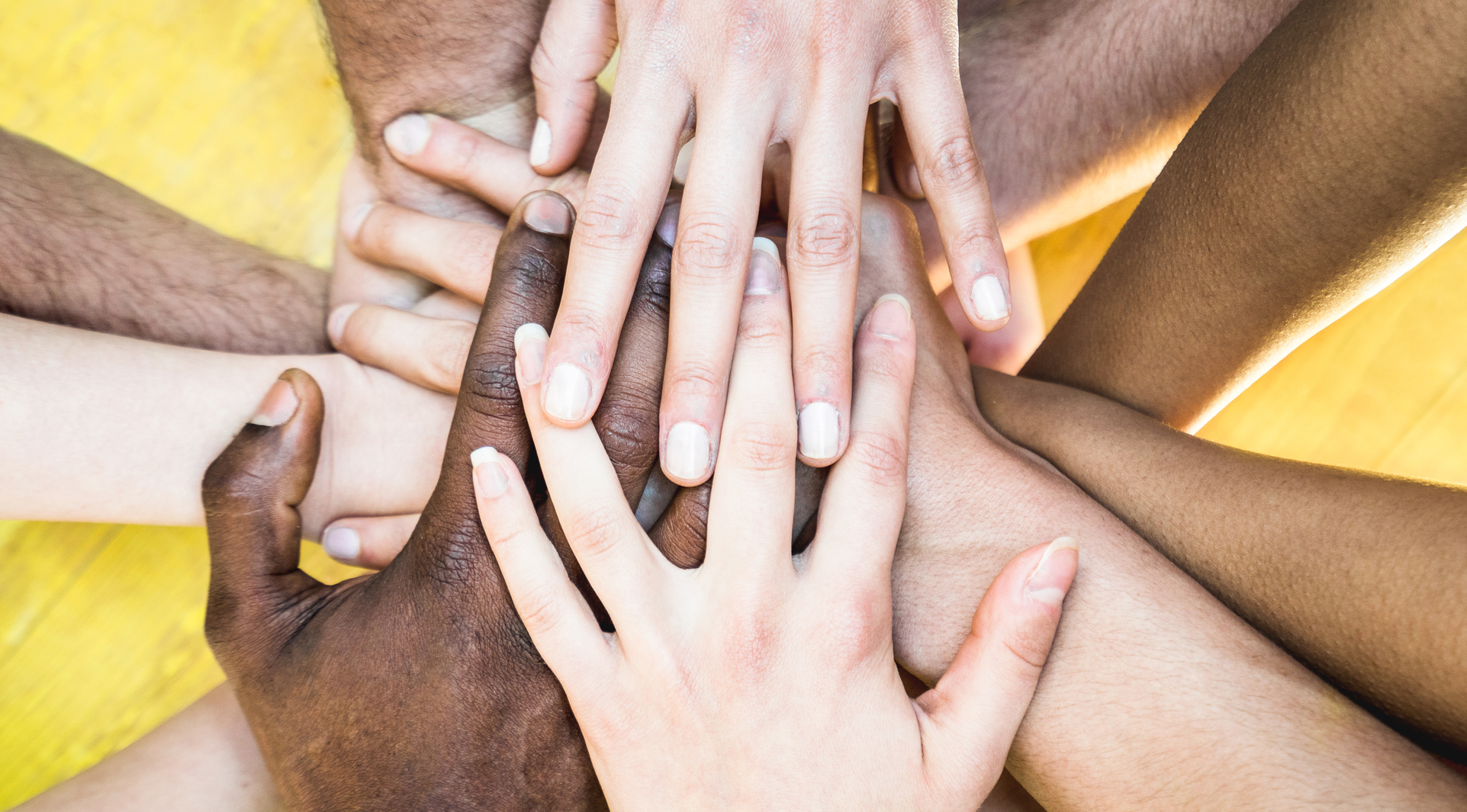 This NORRAG Highlights is co-published by the World of Education Blog, Clare O’ Hagan, Communications Specialist at the Global Education Monitoring Report explains that education, as shown in the 2019 Global Education Monitoring (GEM) Report, ‘Building Bridges not Walls’, has a great ability to fight discrimination with inclusive rhetoric. It can help newcomers adapt to new environments, and it can prepare host communities to accept and celebrate their presence.

In December last year, the UN Secretary General said there was an urgent need to combat hate speech which was not only on the rise, but also entering the mainstream, as moderate political parties adopted anti-immigrant rhetoric in order to build their supporter bases.

Students can learn skills to overcome fear of the unknown, engage constructively with different cultures and avoid simplistic overgeneralization – the epitome of a global citizen. Assessing this finding from the perspective of host countries of refugees or immigrants, the 2019 GEM Report found that more educated people were less ethnocentric, placed more value on cultural diversity and viewed immigration’s economic impact more positively. A 2017 survey from across 140 countries showed that the higher the level of education, the higher the level of openness to immigration levels staying the same or increasing.

Those with less education are more likely to draw on media messages in forming their beliefs, studies show, which can be a dangerous tendency when faced with an increase in fake news. Education helps mediate negative portrayals of immigrants and refugees spread by the media, by teaching political knowledge and critical thinking skills, which allow students to decipher fact from fiction. In the period after the 11 September attacks in New York, the more educated in Germany maintained relatively positive attitudes towards immigrants, while the less educated shifted sharply to more negative views. As the figures below show, on average, those with tertiary were two percentage points more tolerant than those with secondary (Figure 5.1a), who were two percentage points more tolerant than those with primary education (Figure 5.1b). In four out of five countries where immigrants were at least 10% of the population, the more educated were more tolerant. 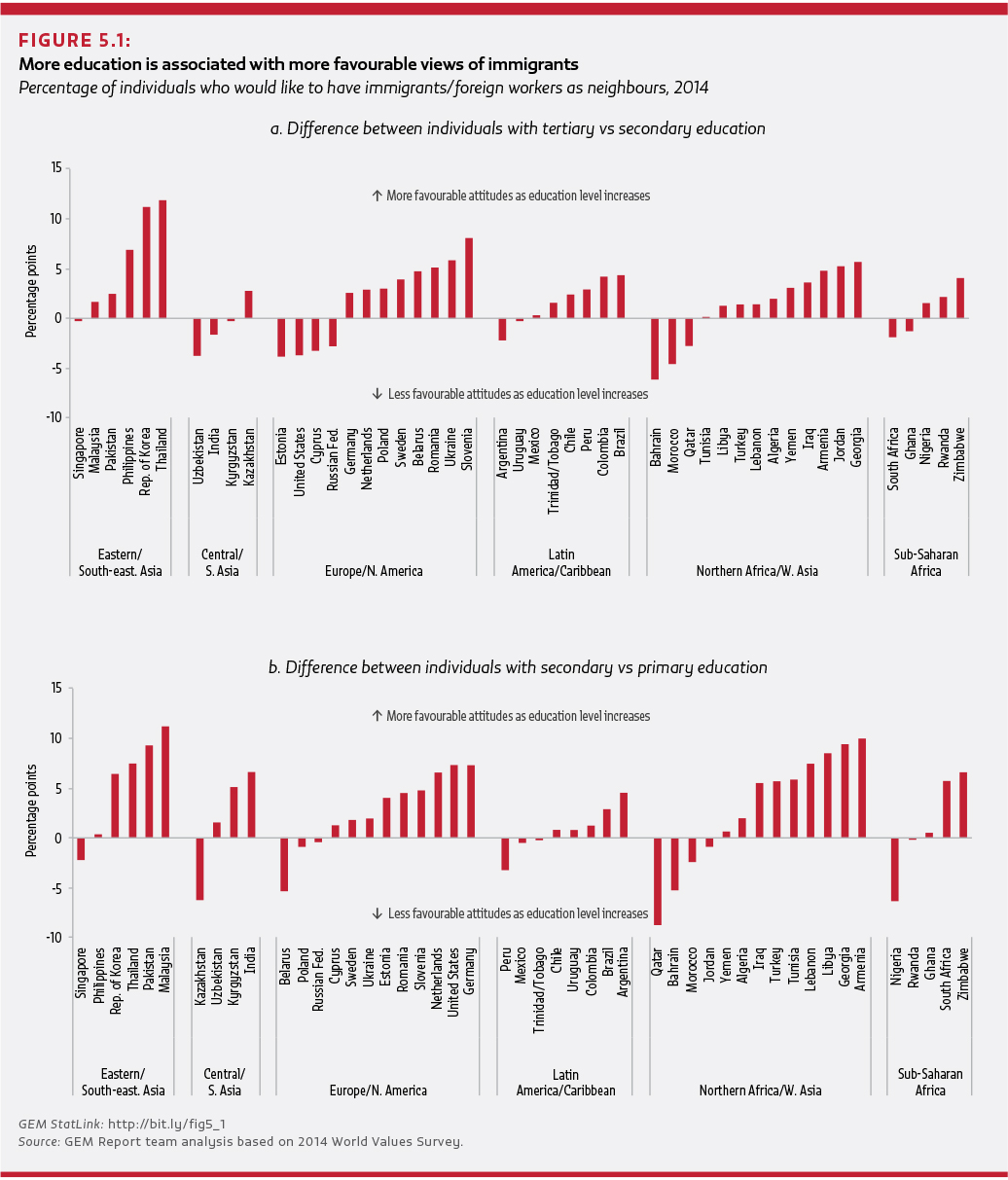 The more educated also appear better able to identify misrepresentation. In Switzerland, more education was associated with a more critical evaluation of immigrant information on political posters. Migration-related media stories often stereotype, using general categories and imprecise terminology and omitting immigrant or refugee voices. Generalizations in the media can reinforce impressions that immigrants will behave consistently in any situation. German undergraduates exposed to news articles using general language, such as ‘an immigrant broke into a house’ were more likely to believe immigrants would be involved in criminal behaviour than students shown more specific descriptions like ‘an 18-year-old immigrant from an identified country broke into the home of an identified celebrity and stole a computer’.

In the past most countries practiced a policy of assimilation towards migrants and refugees, which, our Report observed, risks excluding newcomers and giving them the impression that their culture is viewed as threatening. In the UNESCO Guidelines on Intercultural Education, multicultural education is described as ‘using learning about other cultures to produce acceptance’, while intercultural education goes a step further in striving for a ‘way of living together in multicultural societies through understanding of, respect for and dialogue between the different cultural groups’. The GEM Report welcomed the fact that Australia, Canada, Finland, Ireland, New Zealand and Sweden have gone beyond integrating multiculturalism into their curricula to also practice interculturalism.

Between 2000-2010, Ireland experienced a large wave of immigration. By 2015, immigrant children represented 15% of 15-year-olds. But following the financial crisis there was a surge in anti-immigrant sentiment. More than half of respondents surveyed in 2010 said Ireland was a worse place to live because of immigrants. In previous surveys, between 2002 and 2008, most people said Ireland was a better place because of immigrants. The government launched and ambitious and far-reaching new intercultural education policy as a means of investing in the new immigrants’ skills and improving public attitudes to immigrants.

Proper implementation of intercultural education requires a lot of commitment. The Irish government accessed a large tranche of EU funding, and rolled out in-depth training for teachers, education managers and institutions. Teachers were trained in how to incorporate human rights and global justice into their teaching and to recognize the importance of student attitudes. Since 2003, Ireland has added 18 language options for the secondary leaving certificate examination.

Textbooks and curricula also still have a long way to go before they can be deemed truly intercultural in most high income countries. And the stakes on this matter are high: appropriate education content can help citizens critically process information and promote cohesive societies; inappropriate content can spread negative, partial, exclusive or dismissive notions of immigrants and refugees.

The full support of government policies is indeed critical to enable educational institutions to combat society’s prejudices head-on and rise to the challenge without the full support of a government. Broadening minds, and changing perceptions requires investments in teacher training, textbooks and curricula, and actively engaging with immigrant communities in the process.

About the author: Clare O’Hagan is a Communications Specialist at the Global Education Monitoring Report. Clare worked on the communications of UNESCO’s 2019 GEM Report ‘Migration, Displacement and Education: Building Bridges not walls’, and she blogs regularly about global education issues for the GEM Report.

Editor’s note: This post is part of a collaboration between NORRAG and Education International in observance of the 2019 International Day for the Elimination of Racial Discrimination, which commemorates international efforts to eliminate all forms of racial discrimination. The theme for this year is “Mitigating and countering rising nationalist populism and extreme supremacist ideologies.”