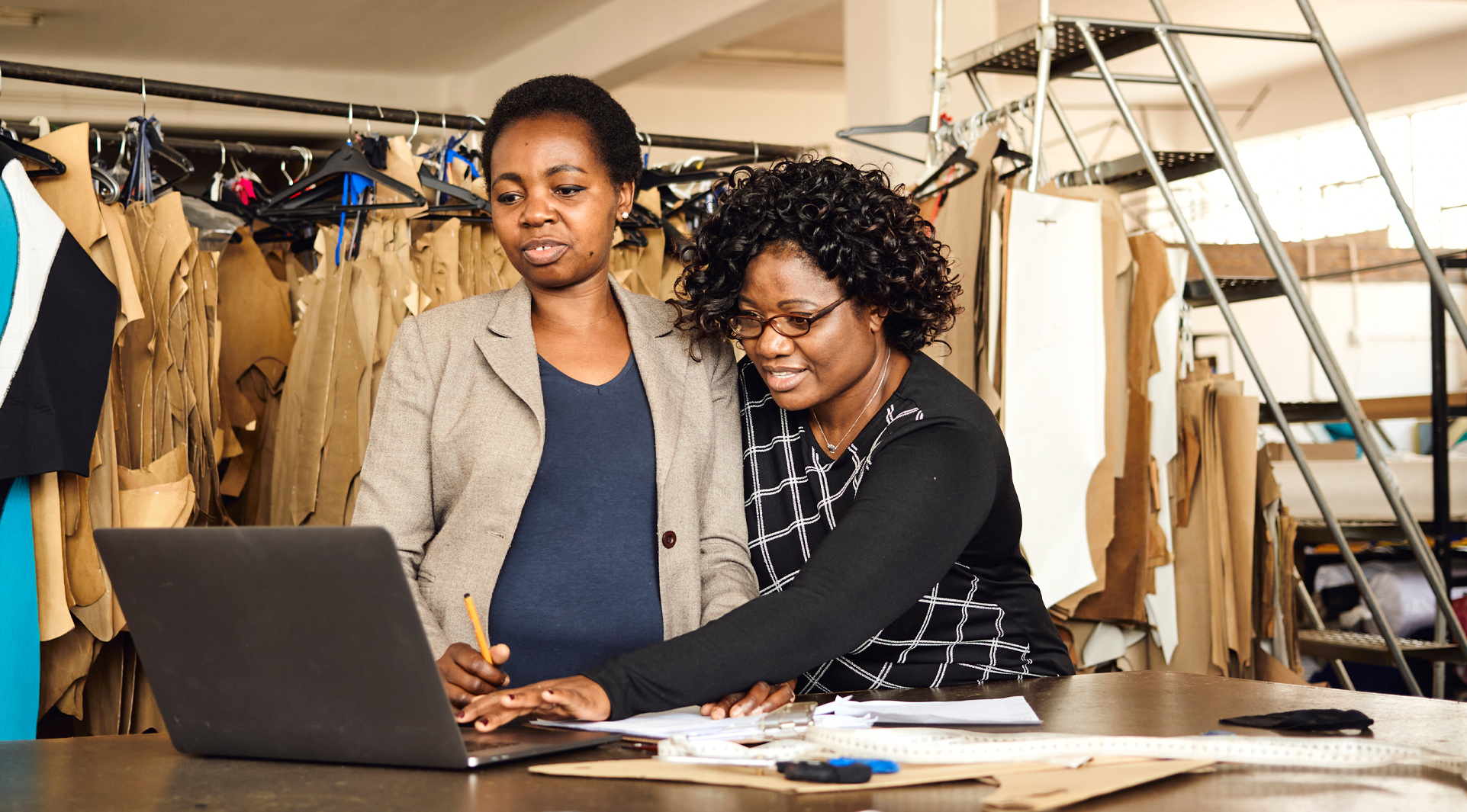 In this NORRAG Highlights, Carolina Alban Conto, Research and Development Manager of the IIEP-UNESCO Dakar, and Alessia Forti, Lead researcher, IIEP-UNESCO Dakar, present the key findings of a recently published paper which diagnoses the situation of women in terms of their integration into the labour market and identifies promising education and training practices to address these challenges. The research focuses on eight Sub-Saharan African countries: Burkina Faso, Chad, Mali, Mauritania, Mozambique, Niger, Nigeria, and Sierra Leone.

Despite some progress, women in Sub-Saharan Africa (SSA) face structural obstacles to getting high-quality jobs. Recent figures show that, on average, 8 out of 10 employed women have vulnerable jobs (against 6.7 men), and 1 out of 4 work as contributing family workers (against 1 out of 10 men).[i]

There is large scope for closing gender gaps in the region. In 2019, Africa’s gender parity score (measuring gender equality at work and in society) was 0.58, indicating high gender inequality (Moodley et al., 2019).

Focusing on women and promoting equity have a major impact on labor outcomes, productivity, and economic development in SSA, which was home to 581 million women in 2021 (United Nations Population Division, 2022).

The facts: where do women stand in the labor market?

Women are less likely to be employed than men in seven of the eight countries analyzed (World Bank, n.d.). In five countries, the gap exceeds ten percentage points, reaching 32 in Mauritania.

High-skilled women also struggle. In all countries except Burkina Faso, the unemployment rate of the most educated women is higher than that of the least educated. It may mean that high-skilled women prefer to queue for quality jobs that better match the level of their qualifications or that because they often come from more privileged backgrounds, they can afford to be unemployed for longer periods. It could also reflect the labor market’s inability to absorb highly skilled talents. These observations and hypotheses equally apply to men; however, in all seven countries, high-skilled women are more likely to be unemployed than high-skilled men, suggesting that they face additional and specific challenges in finding suitable jobs.

Even when employed, women have fewer opportunities to access decent jobs. In all eight countries covered in this study, women are more likely than men to perform ‘vulnerable jobs’ – i.e., as contributing family workers or own-account workers (World Bank Gender Data Portal, n.d.). Vulnerable workers are the least likely to have formal jobs and do not benefit from safety nets to guard against economic shocks.

Gender wage gaps are another key issue for job quality. In Nigeria, women earn only 73% of men’s hourly earnings, 75% in  Mali, and 87% in Sierra Leone. This echoes the overall situation in SSA, where the median monthly salary income of women is, on average, less than half that of men (Diagana, 2022), and the incomes of female entrepreneurs are, on average, only two-thirds that of their male counterparts (World Bank, 2019). Interestingly, wage gaps persist for men and women with similar skills.

What are the causes of gender gaps in the labour market?

Lower participation of women in the labor market may signal a disproportionate share of unpaid care work. At home, women are often responsible for household chores and the main caregivers of relatives in need of care. Indeed, in Mali or Mozambique, women spend, on average, four hours a day more than men in domestic and care activities (Meta, 2021). Besides, in Nigeria, Burkina Faso, and Mauritania, women are over five percentage points more likely than men to report being the main caregiver of a person in their family. Despite its productive contribution to the economy and society (Charmes, 2019), this work is often unpaid, invisible, and poorly valued in society.

Inequity in the distribution of housework and care work is a challenge from a labor market perspective, as this unpaid work may restrict women’s time and capacity to seek, perform and keep employment. In 2021, 41% of women in Nigeria (25% of men), 33% in Mozambique (25% of men) and 31% in Burkina Faso (12% of men) said that household chores had affected their ability to focus on any work they did for pay during the past month (Meta, 2021). These issues are particularly pressing given the high fertility rates observed in these countries.

Gender stereotypes and societal attitudes can also represent obstacles to women’s labor market participation. On average in the countries analysed, over half of the population agree or strongly agree that ‘when jobs are scarce, men should have more right to a job than women’ (Afrobarometer, n.d.).

How can education and training policies help?

An analysis of Education Sector Plans[ii] in force in the countries analyzed highlights eight education policy areas in which the governments are investing to address gender gaps, which could directly or indirectly translate into reducing gender gaps in the labor market:

While      gender-sensitive   education   measures   are welcome, they will not suffice to give women  an  equal  foothold  to  the  labour  market.   Countries   need   to   also   create   an  enabling  environment  for  women  to  overcome   the many challenges they face: parallel efforts need  to  be  put  in  other  policy  areas  too  –  such  as  childcare  and  family  policies,  labour  –  to  make  gender  equality  in  the  labour market a reality.

Conclusions
In almost all the countries analyzed, women are less likely to be employed than men. Moreover, most employed women have vulnerable jobs, facing low pay, informality, and little protection against job loss, illness, and aging. High-skilled women also struggle. They are more likely to be unemployed than low-skilled women and high-skilled men, suggesting that they face specific challenges in finding suitable jobs. Gender gaps in the labor market could be addressed by governments investing in the policy areas outlined above. But parallel efforts need also to be put in place in other policy areas to create an enabling environment for women to find productive jobs.

[i] Contributing family workers are those workers who hold “self-employment jobs” as own-account workers in a market-oriented establishment operated by a related person living in the same household.

[ii] ‘An  Education Sector Plan (ESP)  is a national policy  instrument,  elaborated  under  the  responsibility of government,  which  provides  a  long-term vision  for  the  education  system  in  the  country’ (IIPE UNESCO and GPE, 2015)

The preparation of this report and blog was made possible by funding from the Gender at the Centre Initiative (GCI). GCI is an Alliance of partners, coordinated by UNGEI and IIEP-UNESCO, made up of governments, international organisations, and civil society. The authors are grateful for the support of Fei XU and the feedback of Luc GACOUGNOLLE, Fabricia DEVIGNES, and the IIEP-UNESCO Dakar team.

Carolina Alban Conto is the Research and Development Manager of the IIEP-UNESCO Dakar. Previously, she worked for the UNICEF – Office of Research, the Colombian Embassy in Paris, the OECD, and the Colombian Institute of Education Evaluation (ICFES). She has conducted research with UNICEF, the World Bank, the Institute for Economic and Social Development Studies (IEDES), the Development, Institutions and Globalization (DIAL) and the Rosario University (Colombia). Carolina holds a PhD from the Paris School of Economics and has degrees in Public Policy and Development (MSc), Economics (MSc) and Sociology (BA). c.alban@iiep.unesco.org

Alessia Forti works for the R&D-Dakar and the ‘Gender at the Center Initiative’ IIPE-UNESCO teams, currently on secondment from the OECD Directorate for Employment, Labour and Social Affairs. She coordinates activities on gender institutionalization and mainstreaming in Burkina Faso, and is responsible for conducting policy analysis and research in the field of skills, labour market, and gender. Alessia holds a Master’s in International Economic Policy from Sciences Po Paris and a Bachelor’s in Philosophy from La Sapienza University. a.forti@iiep.unesco.org